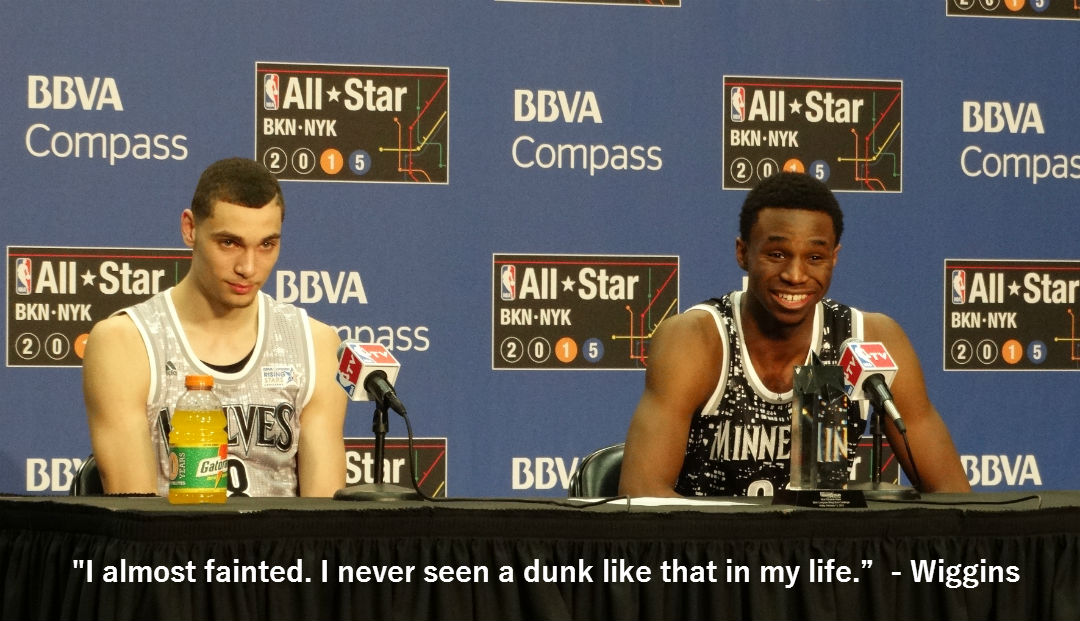 Smush Parker?  Yes Smush Parker, the same Smush who Kobe Bryant called the worst teammate he ever had, is one of Zach LaVine’s favorite dunkers.  I’ll back up a little. We  had a chat with the 2015 dunk contest favorite and former Ballislife All-American Game Dunk Contest winner about the upcoming contest and his inspirations and I must say that his answers are as surprising as some of the dunks he’s going to throw down on Saturday night. Well maybe not as surprising considering Andrew Wiggins said he almost fainted after witnessing one of the dunks Zach has planned.

“Do you feel pressure being the favorite?” I asked Zach already knowing the answer is no.

“No I’m just anxious.” replied a calm as can be LaVine who put on one of the best dunk exhibitions in recent memory this past summer at the Seattle Pro-Am where he made the world not even realize the guy he beat, Kevin Kemp aka Golden Child of Team Flight Brothers, is internationally known as one of the best dunkers in the world.

No disrespect to any of his competitors in the NBA dunk contest but none of these guys are considered on the level of Golden Child when it comes to contest dunking.

The only thing that would worry Zach is if the NBA planned on handicapping the contestants by bringing back one of their many ridiculous ideas to “improve” the dunk contest such as the wheel or team concept.

Out of curiosity I asked Zach if they had the wheel – which you spin and see what past famous dunk you will have to perform – what dunks would he really not want to land on.

“I’m not a prop dunker so I wouldn’t want to land on any dunk that requires a prop” said LaVine.

A prop like dunking in the dark with a glow in the dark outfit or having to blow out a cupcake.

Zach is mainly an off 1 foot dunker and although he can throw down a fast, clean and powerful windmill, he’s not going to be able to do justice to the Human Highlight Film’s trademark dunk.

So how about that team concept last year. Thankfully the NBA went back to the “classic format” but if they did have the teams again, which 2 teammates would Zach want and who would he want to dunk against.

“I’m going to have to go with my teammates Andrew and Glenn. Glenn can dunk with anyone in the league” said a proud LaVine.

I added that if they had a 5 man team that Bad Azz Shabazz and newly acquired Adreian Payne would make them a near impossible team to beat in a dunk contest.

2 former dunk champs and the man who teased us for a decade about competing.

I asked if any of those dunkers were inspirations of his and Zach went back to his childhood and named T-Mac, Vince Carter, his favorite player of all-time Kobe Bryant and the man Kobe hated playing with…SMUSH PARKER!  All jokes aside, Smush did have a unique style and was a legit dunker.

Zach also talked about being inspired by Michael Jordan after watching Space Jam. The movie inspired him to dunk for hours in his backyard with the hopes of one day dunking on players and winning NBA dunk contests.   The NBA dunk contest one will probably come on Saturday but his first poster dunk came way back in 8th grade.

“I got a steal and was just going up to score and the guy went for the block so I reached back and got him with the left.”

As bad as that defender felt he should feel better knowing he was getting dunked on by a future NBA player who many consider the best dunker in the league.

Unlike many other “dunkers’ who claim they just jump and depend on their natural ability.  Zach is a student of the game and the dunk.  He even  studied youtube dunkers like Kenny Dobbs although he said he has no intention of attempting to dunk a ball that’s on fire (but Mason Plumlee told me he did consider it)

He also repeatedly watched old Michael Jordan VHS tapes and can recall all the great dunks in great detail from previous contests.   He named Jordan’s performance in 88, Vince’s in 2000 and Jason Richardon’s underrated 2nd win where he pulled off the reverse between the legs off the bounce dunk as his favorite performances ever.

So what exactly is Zach going to do to put his name next to those greats?  He obviously didn’t want to tell me but did say you can expect a cameo by Wiggins.  I’m betting you can also expect to see his trademark reverse between the legs dunk and also see him make most if not all of his dunks on the first try!

I asked if he was going to pull out a 20 lb (yes 20 pounds!) medicine ball which his Dad used to make him practice and dunk with also knowing the answer was going to be a hell no.  It’s not that he can’t do it but the problem with the dunk is that it would be hard to sell it to the crowd – much like Gerald Green dunking in his socks a few years back.

We concluded the chat with me asking if he does become the first Timberwolve in 21 years to win the contest if he’s going to say the infamous 2 words.

He laughed before giving me another 2 words. Actually he didn’t give me those 2 words, just like how he didn’t really say “fuck me” because he didn’t want to be drafted by the Wolves.  He was saying “fuck me” because one of his dreams came true and on Saturday night we will see another.