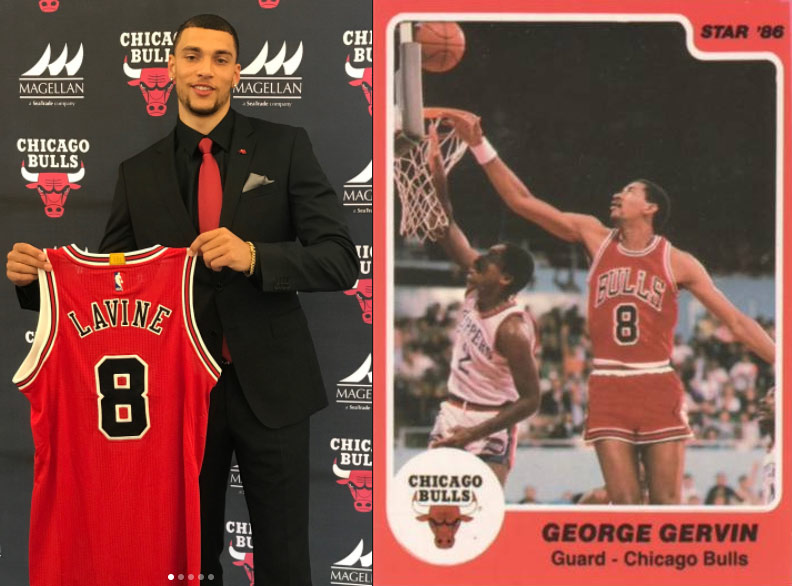 31 years before high-flying dunk champion Zach LaVine held up his new #8 Chicago Bulls jersey, a high-flying dunk pioneer was wearing that number for the Bulls. George “didn’t just do finger rolls” Gervin only got to play one year in Chicago before a young Michael Jordan made him retire, but during that time, he proved a lot doubters wrong by putting up some impressive numbers — like 45 against the Mavs and 34 on 15 of 18 shooting in another game.

I’m hoping LaVine will do the same for Chicago and to the doubters. He’s coming to the Bulls via an unpopular (that’s an understatement) trade, with a recovering ACL and is going to have to do a lot more than throw down some nice dunks for Bulls fans to forget about Jimmy Butler. I think he will. And If he doesn’t, well, at least he can bring Chicago their first dunk championship since the 1988 home job Jordan won.

So in honor of the Ice Man’s final days and Zach LaVine’s first days in Chicago, let’s look back at the best high-flyers to ever wear a Bulls jersey. I’m leaving Gervin off this list because by the time he was wearing #8 in Chicago and pissing off Michael Jordan, he had about 8 less inches on his vert than he did when he was one of the best scorers in the history of the league.