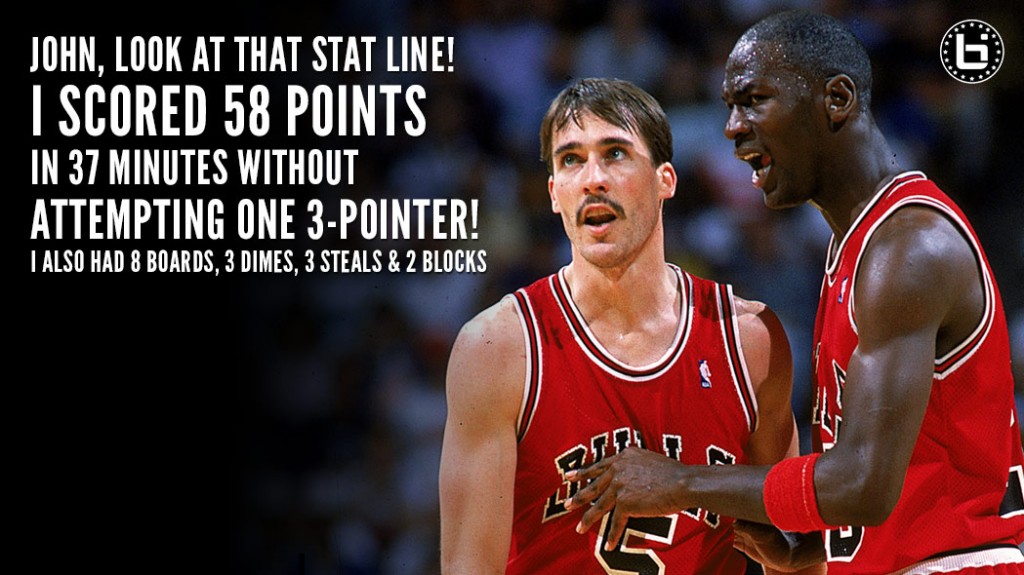 Last night, Steph Curry made 10 3-pointers and finished with a very impressive 51 points in just 34 minutes. Now, I’m not taking anything away from ...(Read more)

Last night, Steph Curry made 10 3-pointers and finished with a very impressive 51 points in just 34 minutes. Now, I’m not taking anything away from Steph and I’m not trying to start any Steph vs MJ arguments with this post. All I want to do is remind and/or let some younger fans know that these type of offensive explosions did happen before Steph, and many times, a guy named Michael Jordan was the man behind them.

On this date in 1987, Michael Jordan broke Chet Walker’s Bulls’ record of 56 points, when he went off on the Nets for 58 points in just 37 minutes. What makes that output so impressive is Jordan never even attempted a single 3-pointer. He attacked the basket over and over again and made a living at the charity stripe, making 26-of-27 free throws. He was also 16-of-25 from the floor and had a stretch of 19 consecutive points in the third quarter. And being the elite defender MJ was, he followed up his five blocks and five steals vs the Hawks with two and three in this game.

This game was also Jordan’s third 50-point game and fourth in franchise history. Jordan would go on to score 50 or more 30 times. Besides MJ and Chet Walker, the only other players to ever score 50 in a Bulls uniform was Jamal Crawford (2004) and Jimmy Butler (2016).

HIGHER QUALITY BUT MISSING AUDIO IN 2ND HALF