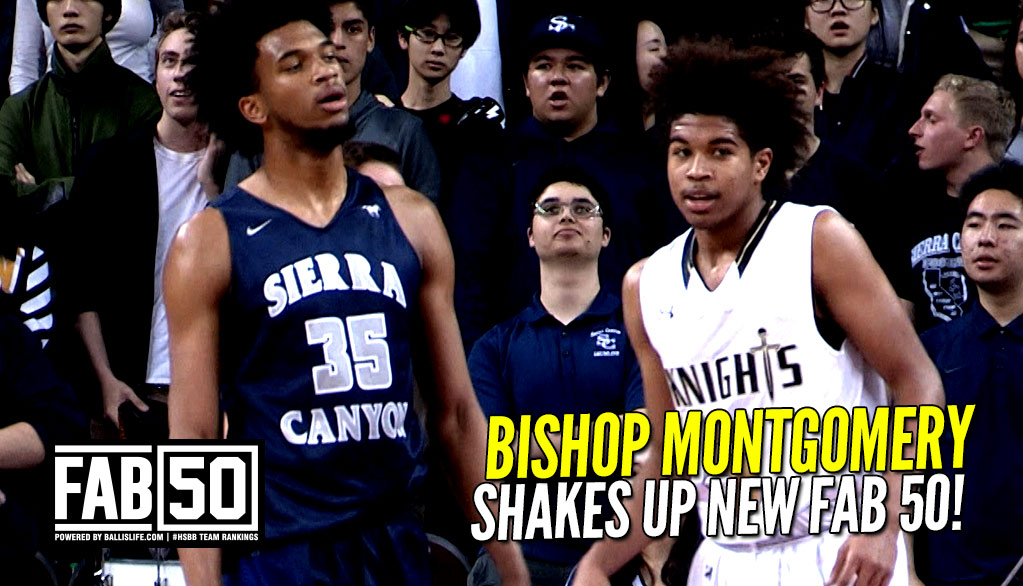 There is shakeup at the top of the new edition of the FAB 50 National Team Rankings powered by Ballislife.com, as previous No. 2 Sierra Canyon ...(Read more)

There is shakeup at the top of the new edition of the FAB 50 National Team Rankings powered by Ballislife.com, as previous No. 2 Sierra Canyon (Chatsworth, Calif.) goes down in the CIF Southern Section Open Division semifinals. Defending FAB 50 national champ Chino Hills (Calif.) also goes down in the semifinals. Read on to see where both clubs fell as we explain the scenarios on how they can bounce back, who the results helped and what’s in store. The two newcomers this week are Archbishop Wood (Warminster, Pa.) and North (Oshkosh, Wis.).

For two consecutive seasons, we went against the grain in placing a team other than Sierra Canyon (Chatsworth, Calif.) as the preseason No. 1 ranked team in California. As compilers of the Cal-Hi Sports Top 20 Weekly Rankings for over 35 years, we don’t just judge off talent level, rather a bunch of factors that include tradition, senior-leadership and other mundane factors. We have the luxury of seeing California’s top teams year-round and try to use that keen insight to place teams in a sold preseason pecking order.

Other credible national polls placed Sierra Canyon as not only preseason California No. 1, but No. 1 in the nation last season. Our state preseason No. 1 Chino Hills (Calif.) started off No. 11 in the FAB 50 and went wire-to-wire as California’s No. 1 ranked team and was able to capture the mythical national title with a 35-0 mark. Sierra Canyon lost its first game of the 2015-16 season.

In 2016-17, we went with Bishop Montgomery (Torrance, Calif.) as preseason state No. 1, and started the Knights No. 7 in the FAB 50, over perhaps an even better Sierra Canyon team. Again, some polls started Sierra Canyon No. 1 in the nation.

Our rankings didn’t look good early on when Bishop Montgomery lost in its opener to unranked Bishop O’Dowd (Oakland, Calif.) at the same event Sierra Canyon lost at a year earlier. There was a caveat to that result, however, as San Diego St.-bound Jordan Schakel didn’t start and was severely limited playing in his first game since July 2016 because of injury. To make matters worse, star junior guard Davy Singleton didn’t play at all.

Coach Doug Mitchell jokingly told his team it didn’t have to worry about rankings the rest of the season, as the focus shifted to getting healthy and peaking at the right time. It all came together last weekend for the Knights, as they knocked off previous FAB 50 No. 2 and top seed Sierra Canyon, 70-63, in the CIF Southern Section Open Division semifinals before 10,258 fans, some who paid over $300 a piece for court side seats at USC’s Galen Center as part of a semifinal doubleheader. With the victory, Bishop Montgomery will attempt to win its second CIFSS Open Division title in three years this Saturday.

Bishop Montgomery jumped all over Sierra Canyon and built a 20-4 lead, but after the Trailblazers made their expected run, it was Schakel who hit two daggers 3-pointers late in the fourth quarter to fend off the nation’s No. 2 team. Schakel finished with 20 points, and Mitchell also got a clutch performance from All-American candidate Ethan Thompson, who finished with 21 points and five rebounds. The Knights will face traditional California power Mater Dei (Santa Ana, Calif.), after it avenged its only loss of the season so far with a 83-80 overtime victory over Chino Hills in the second semifinal.

Chino Hills went cold from outside the arch and wasn’t able to get to the rim at will as it did in the first matchup of the season at the Tarkanian Classic. The difference was the presence of 7-foot Bol Bol, who blocked five shots, altered a few others and finished with 14 points and 15 rebounds. Mater Dei has not lost with Bol in the lineup and although it is a stronger team with his presence, Chino Hills had a late lead and ample opportunity to win the game. That’s how strong all four of California best teams are and why over 10,000 fans came out for two games that didn’t decide any championship.

With its win, Bishop Montgomery moved up eight spots in the FAB 50 National Team Rankings powered by Ballislife.com to its preseason position — No. 7. Sierra Canyon took a tumble from No. 2 all the way down to No. 12. Montgomery deserves credit for knocking off a legitimate FAB 50 National title contender and a team that owns wins over new No. 2 La Lumiere (La Porte, Ind.) and No. 3 Memphis East (Memphis, Tenn.).

Mater Dei jumped up six spots to crack the Top 10, and remains behind Bishop Montgomery for a couple of reasons. First, Mater Dei needed overtime to advance to the CIFSS Open Division final, whereas Bishop Montgomery’s win was more decisive against a team with a stronger overall national resume. Mater Dei did avenge its only loss and has a legit 50-50 chance to defeat the Knights despite being ranked three spots lower.

The Sierra Canyon-Bishop Montgomery result was also key for Montverde Academy (Montverde, Fla.). The Eagles own a victory over a full-strength Bishop Montgomery team and moved up five spots to No. 5 in front of the Knights and No. 6 IMG Academy (Bradenton, Fla.). After the Eagles fell to St. Benedict’s Prep of New Jersey (a team not eligible for the FAB 50), it fell below the IMG team it defeated at the City of Palms Classic in Ft. Myers, Fla, but Montgomery’s key win creates a linear pecking order. Montverde has a loss to No. 4 Imhotep Charter (Philadelphia, Pa.), and Sierra Canyon at No. 12 is now in front of the Findlay Prep (Henderson, Nev.) and Oak Hill Academy (Mouth of Wilson. Va.) teams it defeated head-to-head.

The rankings could get shaken up again next week, and to make matters even more interesting, the season is not over for Sierra Canyon and Chino Hills. These four teams are going to be the top four seeds in the upcoming SoCal Open Division regional pairings that will be announced March 5, the day after the CIFSS Open Division final at the Honda Center in Anaheim, Calif.

Sierra Canyon could conceivably bounce back and beat two of these teams, and then the earlier wins over La Lumiere and Memphis East would come back into play. There still plenty of results that will affect the pecking order and Chino Hills or Sierra Canyon could still end up as CIF State Open Division champions.

There is not as much movement outside the Top 15 of the FAB 50, as the two newcomers are Archbishop Wood (Warminster, Pa.) and North (Oshkosh, Wis.).

No. 48 Wood took on Neumann-Goretti (Philadelphia, Pa.) in the Philly Catholic League Final at the famed Palestra on Monday, February 27, and came away with a 65-58 victory. Collin Gillespie had 24 points to help Wood win its first ever Catholic League title. North is the top-ranked Division 1 team in the AP Wisconsin state poll.