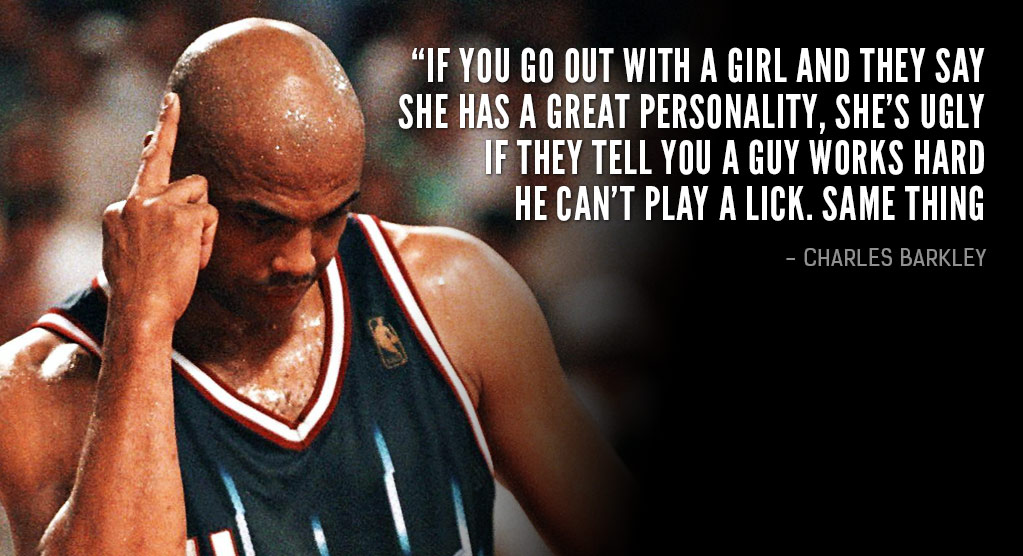 He’s not as polarizing as LaVar Ball but before the BBB creator became a household name, Charles Barkley probably had the title of most loved and ...(Read more)

He’s not as polarizing as LaVar Ball but before the BBB creator became a household name, Charles Barkley probably had the title of most loved and equally hated big bald black man in American talking about basketball.

Some members of our ultra sensitive society consider his Inside the NBA jokes — from making fun of churro-eating women in San Antonio to fat Suns cheerleaders on hoverboards to NBA players needing rest — offensive and/or ignorant. To me, they are hilarious and also very tame compared to things he used to say during interviews and in his autobiographies like Who’s Afraid Of A Large Black Man?

Below are some of my favorite quotes taken from these sources and the blog CharlesBarkleyQuotes. If you are the type that uses social media to whine about how everything in life is so unfair and stupid things like peanut allergy jokes in the movie Peter Rabbit (the movie studio actually released an apology to people complaining about this) then you probably wont enjoy these quotes as much as people with thicker skin and a sense of humor. Or people who remember when the Round Mound of Rebound was a 6’5 unicorn that would drop 40 points, 20 rebounds and your big men (with an elbow) on any given night.

I can be bought. If they paid me enough, I’d work for the Klan.

We better not be doing the Bulls this year. Man, they suck! Bunch of high school kids with $70 million contracts. Damn! I hate my mother for having me too soon.

After retiring from basketball “I’m just what America needs – another unemployed black man.

Ernie: “Did they recognize you in South Dakota?”
Charles: “Yes, they did. It was easy because I was the only black person there. When they see me walking down the street they say ‘There he goes again’. And when I come back the next year they say ‘He’s back yawl!'”

On the Enron scandal investigation: “Almost all those politicians took money from Enron, and there they are holding hearings. That’s like O.J. Simpson getting in the Rae Carruth jury pool.”

I had to explain to my daughter why that skank Monica Lewinski has an hour special on HBO this weekend.

EJ: “Did you graduate from Auburn?”
Charles: “No, but I have a couple people working for me who did.”

Ernie Johnson, on Reggie Evans being caught grabbing the rocks of Chris Kaman: “(Reggie Evans) got caught with his hand in the cookie jar.”Charles Barkley: “Ernie, I don’t know where you get your cookies at but the rest of us don’t get ours there.”

If you go out with a girl and they say she has a great personality, she’s ugly. If they tell you a guy works hard, he can’t play a lick. Same thing.

Charles Barkley after seeing a picture of Sam Cassell on the screen: “Phone home.” And later he remarks to Kenny, “Sam Cassell is a good guy, but he’s not going to wind up on the cover of GQ anytime soon.”

On the Golden State Warriors: “Maybe I’m old school, but I’m never going to like that little girly basketball where you have to outscore people. I’m biased against girl basketball.

I’d never buy my girl a watch… she’s already got a clock over the stove.

On the Portland Trail Blazers (back when they were known as the Jail Blazers) serving Thanksgiving meals: “In between arrests they do community service.”

When I was recruited at Auburn [university], they took me to a strip joint. When I saw those titties on Buffy, I knew that Auburn met my academic requirements.”

On Jerry Krause still being able to keep his job as GM of the Chicago Bulls: “Jerry Krause must have pictures of his boss’s wife having sex with a monkey.”

After throwing a guy through a 1st floor window in a bar Charles was in front of the judge.
Judge: “Your sanctions are community service and a fine, do you have any regrets?”
Charles: “Yeah I regret we weren’t on a higher floor”

After an Olympic Dream Team victory over Angola, in which they won 116-48, Charles got into a physical altercation with a member of Angola towards the end of the game, afterwards he says. “Somebody hits me, I’m going to hit him back. Even if it does look like he hasn’t eaten in a couple weeks. I thought he was going to pull a spear on me.”