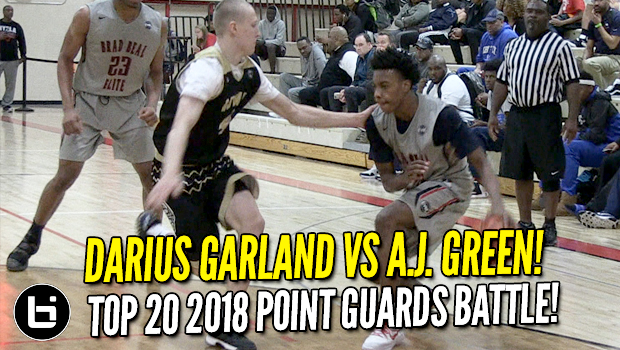 Darius Garland was the highest rated and most heavily recruited player at the 2017 NY2LA Sports Swish ‘N Dish near Milwaukee. So the 5-star, 6-ft point ...(Read more)

Darius Garland was the highest rated and most heavily recruited player at the 2017 NY2LA Sports Swish ‘N Dish near Milwaukee.
Click here to Read More

So the 5-star,
6-ft point guard from Tennessee was playing with a target on his back (as usual). Perhaps the number 1 point guard in the nation, the Brad Beal 17U 2018 PG holds offers from Duke, Kentucky, Kansas and many more!
Garland is joined on his team by nationally-ranked powerful 6’9 2019 Francis Okoro, SLU-bound guard Fred Thatch and Chaminade HS teammates Jericole Hellems and Karrington Davis among others.
In what may have been the highest-level basketball of the weekend, undefeated Brad Beal 17U met Iowa Barnstormers who feature top 50 players Joey Hauser and Joe Wieskamp and are led by top 100 (and rising) point guard AJ Green.
The son of Northern Iowa assistant Kyle Green, AJ Green, has shot up a few inches (now 6’3) and showed off his offensive skills (ball-handling, shooting) against Garland and his teammates.
In the second half, the point guards Garland and Green took over most of the scoring duties. Despite a considerable rally, Brad Beal went on to win.
Garland finished with a game-high 21 points despite coming off the bench in the first half. His team went undefeated (6-0) on the weekend.
Check out this footage from Brad Beal 17U EYBL vs Iowa Barnstormers 17U from the 2017 NY2LA Sports Swish ‘N Dish!
Ballislife will continue following these teams through the Spring and Summer.
For more high school basketball mixtapes watch and subscribe to all the Ballislife youtube channels and follow @scottballislife on Instagram and @BallislifeCHI on Twitter.
Thanks for watching and subscribing!