Back in January, the internet and media had a field day making fun of Delonte West after an Instagram account believed to be ran by Delonte, posted an image of West and Del Curry with caption “whos dad was better: Curry or Lebrons” and the following message,

@kingjames we not cool anymore man.. Take my name out ur mouth.. And stay wit one team..u suck jo..u need all stars surrounding u to win ..talk bout my fam again n watch wats gunna happen jo..it’s all fun and games until somebody gets hurt.”

Then reports came out stating the account was a fake, although many believe it really is or was his account. I’m not sure it matter, because if he said it or not, the world still sees him as the same person.

Granted, the 32 year old former NBA player has done plenty in the past to deserve negative exposure, but how can a “damaged” individual move on and heal if the world continues to treat them like the person they were or the person they are trying to leave behind? The answer is they don’t. And that’s evident by this depressing TMZ Sports update and photo of West in Houston earlier in the week. 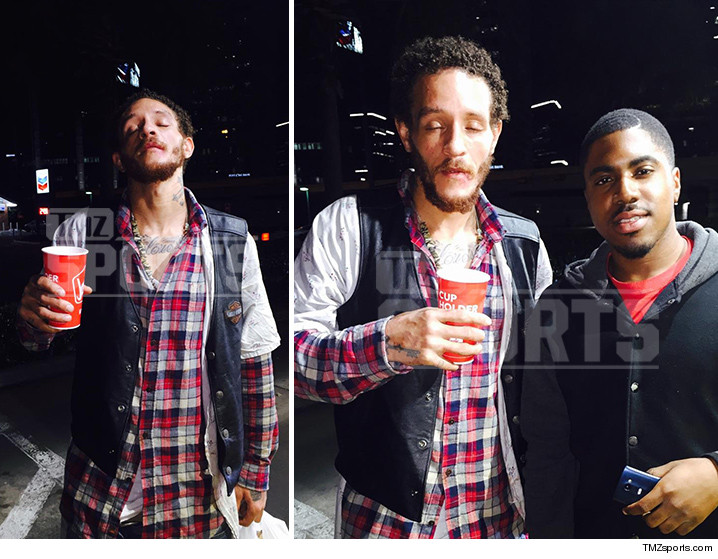 It’s actually a sad story … the person who shot the photo is a huge basketball fan and said they noticed the former 1st round draft pick wandering around outside of a Jack in the Box around 10 PM all by himself with no shoes.

When the fan approached him and asked, “Are you Delonte West?” — he replied, “I used to be but I’m not about that life anymore.”

The person who took the photos of West also posted this on his Instagram.

Bro had hospital robe on like he escaped from the psych ward or some shit. I asked wat happened and he said life…….damn!!

I’M NOT LIVING FOR JUST ME ANYMORE

This video by Vice Sports was made just 2 years ago