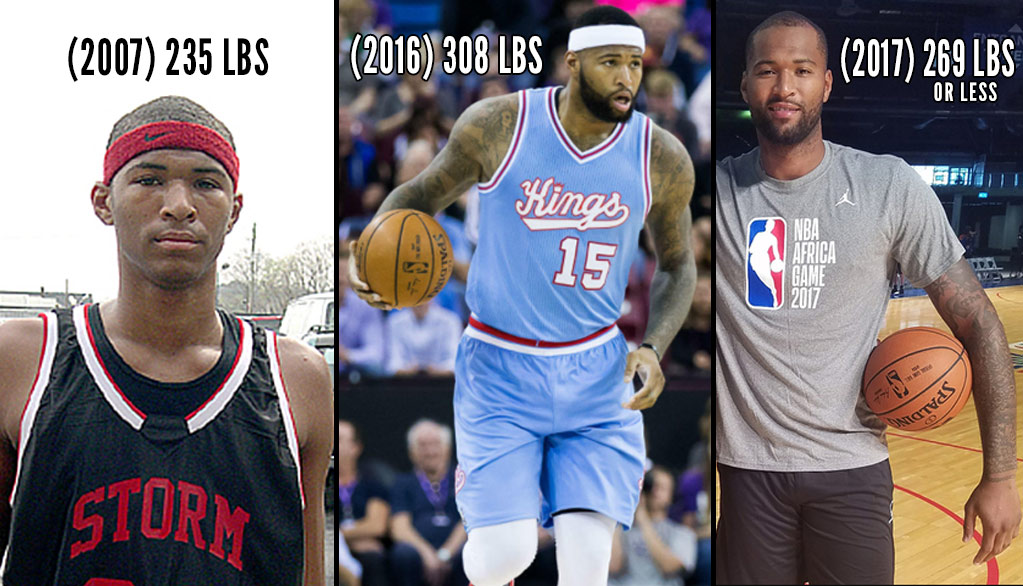 "Probably the best I have felt my whole career."

If you watched the Team World vs Team Africa exhibition game on Saturday, you might have noticed a slimmer looking DeMarcus Cousins than the one you saw at the end of his disappointing non-playoff season with the Pelicans. After putting up 9 points, 10 boards and 4 steals in 16 minutes, the Pelicans center told ESPN’s Marc J. Spears this is “probably the best I have felt my whole career.”

He also told Spears via The Undfefeated the weight loss is a result of a new strict diet and workout regimen he’s been following in Los Angeles this summer.

“I just try to improve every season in some type of way. This was another area I thought I could improve in,” Cousins said.

How much does Cousins weigh now?

“I don’t know. I really don’t know,” Cousins said. “I lost a lot of weight. I did my little training program in L.A. and I like the results. I’m good. I feel lighter on my feet. I’m moving a lot better than I have in previous years. It doesn’t hurt to wake up in the morning and the aches and pains have kind of gone away. It’s definitely benefited my body a lot more.”

During a conference call on Thursday, Boogie talked about why it was so important for him to shed some pounds.

“Every offseason I try to work on something to better my game,” Cousins said Via Nola.com. “I really wanted to focus on my body this summer. I kind of let myself go in the second half of the season last year. I got in a place where I didn’t really want to be.

“Just being able to move easier,” Cousins said was the biggest effect of his weight loss. “Less stress on your joints and your knees and your feet. And also just being able to keep up with the pace at all times. The game has changed in this so-called ‘small-ball era.’

This is the second summer in a row Boogie has lost weight. According to Steve Kyler of Basketball Insiders, Cousins went from a shocking 308 pounds to 275 in preparation for his 2016 Olympic debut .

“He’s gotten in unbelievable shape for this,” Team USA coach Mike Krzyzewski said. “He wants to be here and he wants to represent his country, and I’m proud of the progress he’s made.”

According to the SacBee, much of the weight loss can be contributed to 2 1/2 months dedicated to yoga, Pilates and weights in heated rooms.

“I feel great,” Cousins said afterward. “It’s just that feeling of your body detoxing every workout, so that’s one thing. I feel a lot lighter on my feet. Of course I’ve slimmed down. I’m a lot more flexible, a lot more mobile, so it’s all coming together for me.”

WEIGHT CHANGE OVER THE YEARS

Google currently has the 26-year old All-Star listed at 6’11 and 269 pounds. If he is in fact less than that weight, then he’s back to his high school weight between his junior and season season. ESPN listed him at 6’10, 235 pounds during his junior season in 2007 and Max Preps had him at 270 by the end of his high school career.  If these numbers are accurate then Boogie has gained as much as 73 pounds over the past decade.

“As the years passed and her son seemingly began to grow taller by the day, his (high school) coaches suggesting that he take laxatives, drink excessive amounts of water, diet, exercise and sweat profusely in order to make weight every week.

6’11 292 college freshman.  Weight could be an issue if he does not learn to become disciplined about diet and off court habits

He may be a bit on the heavy side as well, but nothing a little time in the weight room can’t solve.

“It was terrible, to be honest,” Cousins said about his rookie season. “When I’m talking about people being gullible, my own organization was. I came in and it was, You got to do this, you’ve got to do that. You’ve got to lose weight. It was everything negative before I even played my first game. It was rough from the beginning. I’m thinking I’ve got to go to battle with these guys and they don’t even believe in me in the first place.”

And how often did he work out?

“I probably did like 30 minutes a day,” he said. “The rest of the time I probably sat there and feasted. My fingers got very strong this year, a lot of video games. I won’t be getting swiped as much this year. Hands are pretty strong. It’s going to be a good season.”