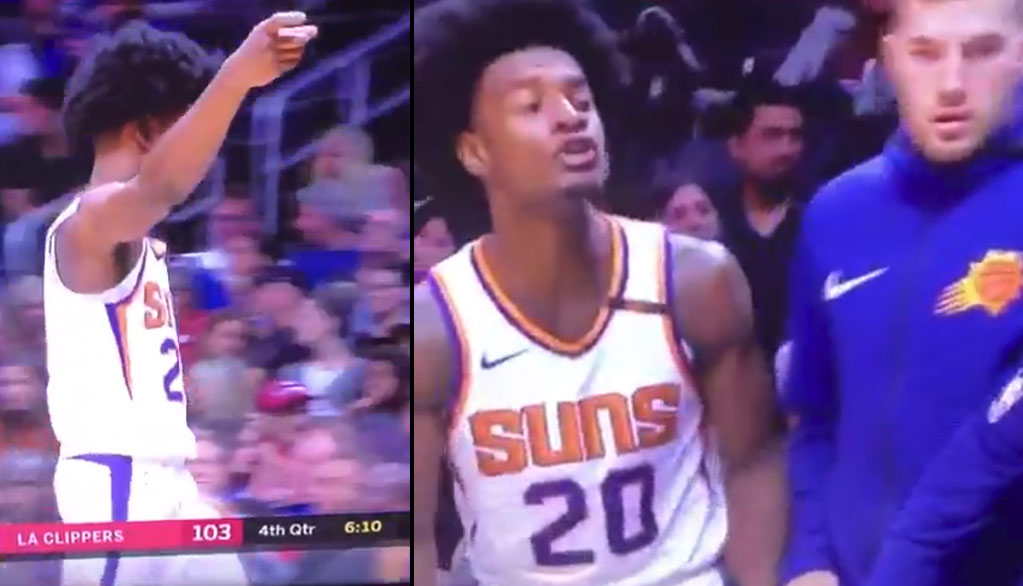 Bang, bang, bang! Fuck you! Ring, ring, ring. Hello Josh, it’s Adam Silver. Josh Jackson might be getting a call from the league after reminding a ...(Read more)

Did Josh Jackson Just Shoot At A Fan Then Say FU During The Suns 42-Point Loss?

Josh Jackson might be getting a call from the league after reminding a fan he’s a shooter and saying what I assume was not “thank you” during the Suns 42-point loss to the Clippers. Yes, they lost by 42 just two games after losing by 48 to the Blazers (I guess these two losses says a lot about the Lakers two-point win in between).

Good news is I’m assuming those imaginary bullets missed the target since Jackson was just 3-of-10 from the field and 4-of-8 (8-of-17 over his last three games) from the free throw line. It was also obvious from the way Jackson closed his eyes and looked away while pulling the trigger that he didn’t really want to do it. Maybe the league will take this into consideration.

I’ll be serious for a second. Last season, Brandon Jennings was fined $35,000 for making a “menacing gesture” at Jared Dudley. The league also fined Gerald Green $25,000 for using his nine and a half fingers to do a “menacing gesture” while celebrating a made shot. The only player I can think of who recently got away with a hand gun gesture was (the not so menacing looking) Isaiah Thomas, who made the gesture to DeMarre Carroll, who was actually once shot.

Just in case you were curious to how much the NBA would fine a player for shooting a real gun, back in 2007, Stephen Jackson was suspended seven games for firing a few shots after getting struck by a car outside of a strip club. Yes, you read that correctly.

Police said the disturbance began with an argument inside Club Rio involving patrons and players. The players said they left the club, but the patrons followed them. Then things turned physical.

Sgt. Matthew Mount, a police spokesman, said Jackson fired five shots from a 9mm pistol outside the Indianapolis club after he was hit in the mouth and struck by a car that sent him tumbling onto the hood.