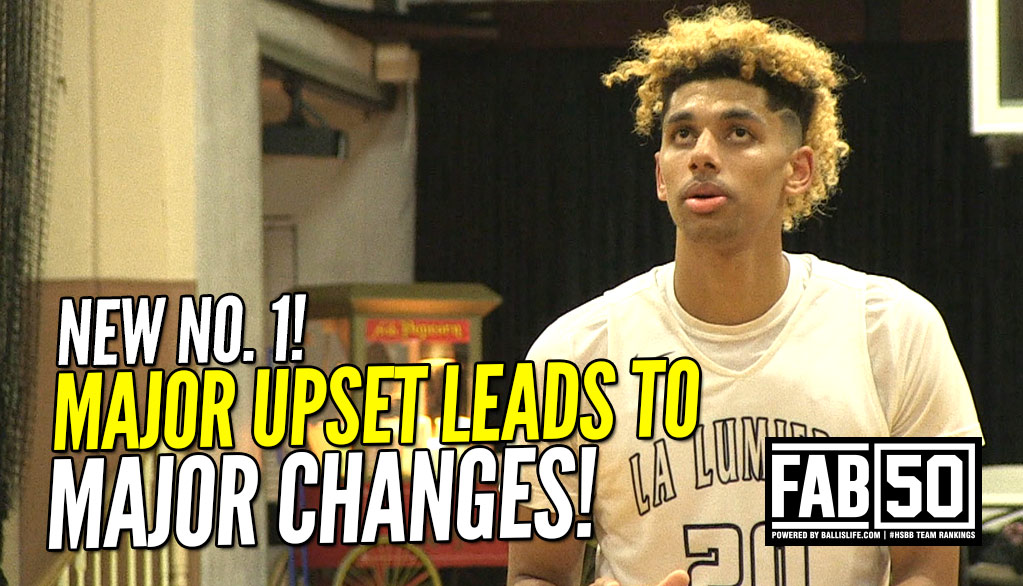 We ring in 2017 with a new No. 1 team in the FAB 50 National Team Rankings powered by Ballislife.com as unbeaten La Lumiere (La Porte, ...(Read more)

We ring in 2017 with a new No. 1 team in the FAB 50 National Team Rankings powered by Ballislife.com as unbeaten La Lumiere (La Porte, Ind.) takes over the top spot after preseason No. 1 Oak Hill Academy (Mouth of Wilson, Va.) fell twice since our last December update. Other contenders for the top spot include Montverde Academy (Montverde, Fla.) and Nathan Hale (Seattle, Wash.). Read on for our explanations and potential scenarios in the coming weeks.

After preseason No. 1 Oak Hill Academy (Mouth of Wilson, Va.) fell 83-79 to California’s top-ranked club, Sierra Canyon (Chatsworth, Calif.), in a showcase game, it put preseason No. 2 La Lumiere (La Porte, Ind.) in position to take over the top spot in the FAB 50 National Team Rankings powered by Ballislife.com. When Sierra Canyon later fell in the championship of the Les Schwab Invitational to then No. 24 Nathan Hale (Seattle, Wash.), it made the decision that much easier.

La Lumiere has been dominant so far in its 14 wins and upcoming tests will test its ranking positioning. After winning the prestigious City of Palms Classic in Ft. Myers, Fla. with a 63-54 victory over No. 8 Memphis East (Memphis, Tenn.), the Eagles were also considered for No. 1. They have four wins over FAB 50 ranked foes, including a 70-66 semifinal victory over No. 3 IMG Academy (Bradenton, Fla.), and field one of coach Kevin Boyle’s finest defensive units ever.

We saw no need to make a switch or jump La Lumiere because the Lakers have been quite impressive both times we evaluated them and beat the Hamilton Heights Christian Academy (Chattanooga, Tenn.) team that defeated Memphis East handily (70-56). Montverde Academy actually will play Memphis East for the second time this season at the Penny Hardaway Hoopfest in Memphis on January 7.

La Lumiere takes on No. 5 Findlay Prep (Henderson, Nev.) on the same day at the Cancer Research Classic in Wheeling, W. Va. and faces battle-tested Sierra Canyon on January 16 at the Hoophall Classic in Springfield, Mass. Sierra Canyon will be traveling from the Bass Pro Tournament of Champions in Springfield, Mo., in a tournament field that includes Montverde Academy, Findlay Prep, Memphis East and No. 23 Greenforest Christian Academy (Decatur, Ga.)

The real debate came at who should be slotted in the No. 3 position, and we decided to go with IMG Academy over Nathan Hale. IMG Academy was very competitive versus No. 2 Montverde Academy and has an impressive slate of victories, including ones over No. 10 Patrick School (Elizabeth, N.J.), No. 13 West Oaks Academy (Orlando, Fla.), No. 40 Pebblebrook (Mableton, Ga.), No. 43 Norcross (Norcross, Ga.) and No. 45 Neumann-Goretti (Philadelphia, Pa.). Hale nipped Sierra Canyon in the Les Schwab title game and had Oak Hill not dropped a second game after losing to Sierra Canyon, Hale likely would have check in at No. 3.

Sierra Canyon fell one spot in the rankings to make room for Findlay Prep, which not only takes on top-ranked La Lumiere this week but defeated Oak Hill Academy more convincingly. Sierra Canyon was in a dogfight, whereas the Pilots were in complete control and cruised to a 78-62 win over the Warriors in the title game of the Iolani Classic in Hawaii. Kentucky-bound P.J. Washington is having a standout season so far playing for his father Paul Washington Sr. As noted in the preseason, the coaching carousel, not the talent level, kept the Pilots low in the rankings but Washington Sr. has done an excellent job and built good chemistry in his first year at the helm.

Leading Mr. Basketball USA candidate Michael Porter Jr. of Nathan Hale averaged 32 point and 16.7 rebounds in four Les Schwab Invitational victories and is keeping word on his promise that the Raiders’ preseason ranking was too low as well. Bound for the University of Washington after spending his underclass years at Father Tolton (Columbia, Mo.), Porter Jr. had 27 points 15 rebounds and four steals versus Sierra Canyon, while top-ranked junior Marvin Bagley III had 22 points for the one-loss Trailblazers.

Teams that play demanding schedules were not dropped from the FAB 50 for multiple losses if there were off-setting wins over ranked foes. Hamilton Heights Christian Academy is a good example. We also are in the stage of the season where we reward undefeated teams with a signature win.

We also didn’t drop previous No. 6 Neumann-Goretti (Philadelphia, Pa.) out because All-American guard Quade Green got hurt during the team’s first game of the City of Palms versus IMG Academy. When he was healthy, the Saints defeated No. 14 Imhotep Charter, which recently captured the Beach Ball Classic in Myrtle Beach, S.C., 78-76, over No. 46 Evanston (Evanston, Ill.).

According to coach Carl Arrigale, the Kentucky-bound Green has now recovered from his back and ankle injuries.