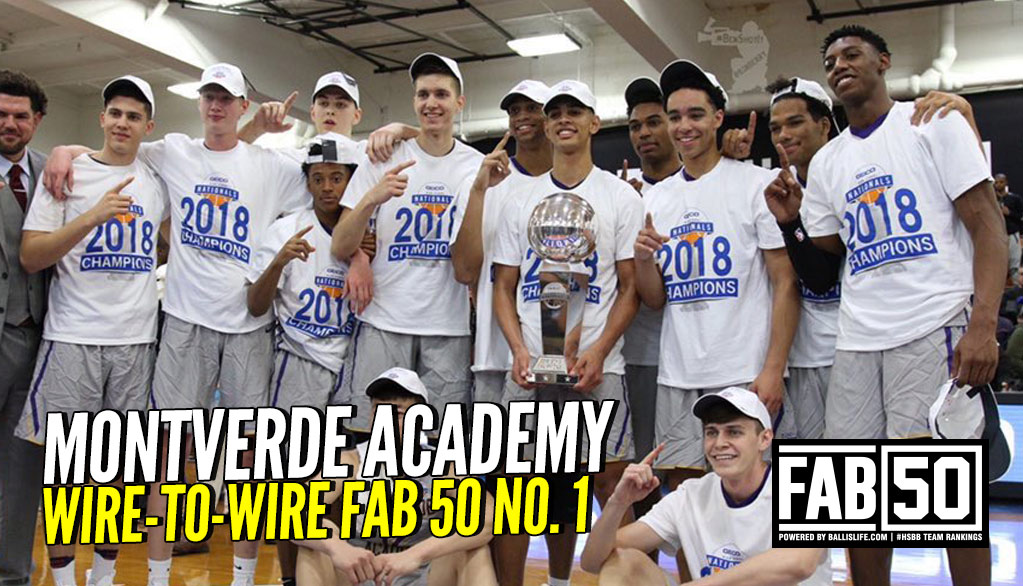 Montverde Academy of Florida captures the FAB 50 national crown presented by Ballislife.com by finishing undefeated against a challenging schedule and going wire-to-wire as our No. ...(Read more)

Montverde Academy of Florida captures the FAB 50 national crown presented by Ballislife.com by finishing undefeated against a challenging schedule and going wire-to-wire as our No. 1 ranked team. Unlike last season when Nathan Hale of Washington edged La Lumiere of Indiana, there really is no debate for the 2017-18 season as the next undefeated team in the rankings was No. 9 Upson-Lee of Georgia. Read on for a breakdown of GEICO Nationals that Montverde Academy won for a record fourth time and check later this week for final regional Top 20 rankings and expanded FAB 50 rankings with write-ups for all 50 teams.

Entering GEICO Nationals this past weekend in New York, it became clearly evident the winner of the end-of-season tournament (which has been around for a decade) would determine the No. 1 ranked team in the final 2017-18 FAB 50 National Team Rankings powered by Ballislife.com and capture the mythical national title for boys high school basketball.

The eight-team tournament came down to FAB 50 No. 1 Montverde Academy (Montverde, Fla.) and No. 3 University School (Ft. Lauderdale, Fla.) after the Sharks knocked off No. 2 Oak Hill Academy in its semifinal contest, 80-65, to avenge an earlier loss to the Warriors. Montverde Academy was impressive in its 71-53 semifinal win over No. 5 Findlay Prep (Henderson, Nev.) after getting a major league scare in its opening round win over unranked Lone Peak (Highland, Utah.).

Oak Hill Academy, which earlier defeated University at the Hoophall Classic,  didn’t have McDonald’s All-American Keldon Johnson at 100 percent after he turned his ankle in the 71-53 opening round win over No. 19 Garfield (Seattle, Wash.) and had trouble slowing down Mr. Basketball USA candidate Vernon Carey Jr., as he erupted for 29 points on 13-of-16 shooting from the field. For Montverde Academy, its interior team defense rose to the occasion and slowed down Carey when the game was in the balance and limited him to 12 points in its 76-58 title game victory.

Six-foot-10 Filip Petrusev (15 points) and 7-foot Balsa Koprivica did a quality job of getting physical with Carey and Monteverde’s team defense never wavered, whereas some of the teams at GEICO Nationals had stretches where its defense looked sluggish.

It also helped the Eagles to have R.J. Barrett on its team, as the 6-foot-7 Mr. Basketball USA candidate averaged 26.7 points and 10 rebounds in his team’s three victories at GEICO Nationals. Barrett had 25 points and 15 rebounds versus University and finally captured the coveted tournament championship which eluded him in his first two seasons in the program. Montverde Academy also got a huge lift from shooting guard Mike DeVoe, who made 5-of-7 3-pointers and finished with a 21 points. The Eagles led 35-26 at halftime and outscored the Sharks in each quarter.

Barrett not only led his team to the tournament championship, he also broke the event’s all-time scoring mark held by former Montverde Academy standout Ben Simmons, now a leading NBA Rookie of the Year candidate with the Philadelphia 76ers. Barrett can also now call himself a FAB 50 national champion as Montverde captured its first mythical national title since 2014-15 when Simmons led Montverde Academy to its last of three consecutive FAB 50 titles. The Eagles also won GEICO Nationals in each of those three seasons (2013-15).

This is the Montverde’s fourth FAB 50 national crown under Kevin Boyle since he began coaching at the school in the 2011-12 season. This season also marks the fourth time Boyle’s club has opened as preseason FAB 50 No. 1 and also finished at No. 1. This is the program’s first wire-to-wire FAB 50 No. 1 finish. The 2014-15 team lose one game in December before returning to No. 1 in the second poll of January. The 2013-14 team lost on-court to Curie (Chicago, Ill.) in a game that was later forfeited by the Condors, and rose back to No. 1 after Curie lost on the court.

This season, the Eagles had zero blemishes on-court, but its perfect record was almost wiped out when Lone Peak went bonkers from 3-point range in the second half and nearly pulled off the opening round upset at GEICO Nationals. Montverde Academy led by as many as 19 points, but Lone Peak made 19-of-43 3-pointers in the game and 12-of-24 in the second half alone to eventually tie the game. With 8.3 seconds remaining and the game tied and with possession of the ball, Lone Peak was charged for a timeout it did not have. After the technical foul shots and change of possession, the Eagles held on for a 87-82 victory.

Montverde Academy was down by six points versus FAB 50 No. 14 Roselle Catholic in the final minute and a half, but Barrett scored the last seven points of the game to give his team a dramatic 60-59 victory. DeVoe hit a 3-pointer at the buzzer to knock off Findlay Prep, 69-67, in the team’s first meeting in the championship game of the Montverde Invitational.

In all, Montverde Academy won 15 games against opponents who were ranked or previously ranked in the FAB 50.

Findlay Prep fell one spot in the final rankings to No. 6, as the Pilots must remain in front of the Paul VI (Fairfax, Va.) they defeated. University School finished No. 2 as a result of the avenging win over Oak Hill Academy, which drops one spot in the final edition of the weekly rankings.

Undefeated clubs Upson-Lee (Thomaston, Ga.) and Warren Central (Indianapolis, Ind.) did enough to be ranked ahead of first round losers Shadow Mountain (Phoenix, Ariz.) and La Lumiere (La Porte, Ind.), which won GEICO Nationals in 2017 and finished No. 2 in the FAB 50 to unbeaten Nathan Hale (Seattle, Wash.).

The coach of that team, former NBA standout Brandon Roy, brought his Garfield (Seattle, Wash.) team to New York, but its mediocre performance caused his current team, the Class 3A state champs, to drop eight spots in the final rankings. That result also hurt Class 4A state champ Gonzaga Prep (Spokane, Wash.), as the Bullpups fell four spots this week. Neither Garfield or Seattle Prep defeated a team that finished in the final edition of the 2017-18 FAB 50.