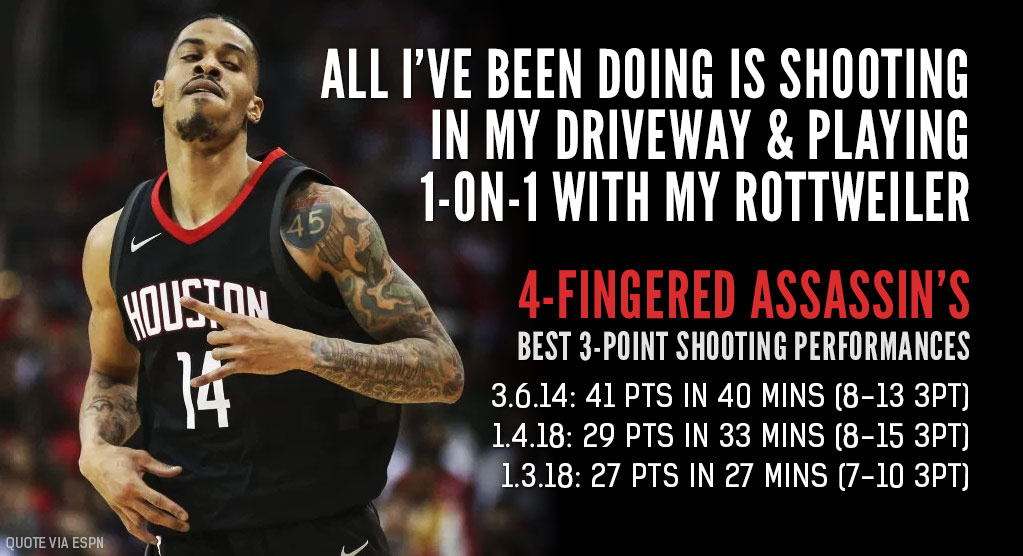 I said it after he put up 27 points with 7 threes against the Orlando Magic on Wednesday and I’ll say it again: Why was Gerald ...(Read more)

I said it after he put up 27 points with 7 threes against the Orlando Magic on Wednesday and I’ll say it again: Why was Gerald Green (last seen saving Hurricane Harvey victims in a boat) not on a NBA roster when the Rockets called the 9-Fingered Assassin/Rim Inspector a week ago?

“All I’ve been doing is shooting in my driveway and playing one-on-one with my Rottweiler,” Said the 31-year old Green to ESPN.

On Thursday, the local H-Town product made Houston Rockets history by knocking down 8 threes and becoming the first player in franchise history to record 7 or more threes in consecutive games. Considering how many threes players like James Harden and Eric Gordon take and make, it’s surprising that Green would have this record. It’s even more surprising when you consider Green has only made 7+ threes once in his first 10 seasons in the NBA and he’s only played  five games with the Rockets this season — all off the bench.

As impressive as his 29-point night with 8-of-15 shooting from downtown was, it wasn’t enough to get the Harden-less Rockets a win against the defending Champs.

“Gerald Green just kept them in the game almost single-handedly,” Said Coach Steve Kerr after the 124-114 Warriors’ victory. “He’s one of those guys it seems like you should just leave him open because it’s all of the challenged ones that he makes. He makes all these crazy, difficult shots when you’re flying at him and then there’s some that are open that he misses.”

Here’s a look at the top shooting 3-point performances by Green followed by a reminder that the cupcake blower is also one of the greatest dunkers in NBA history.