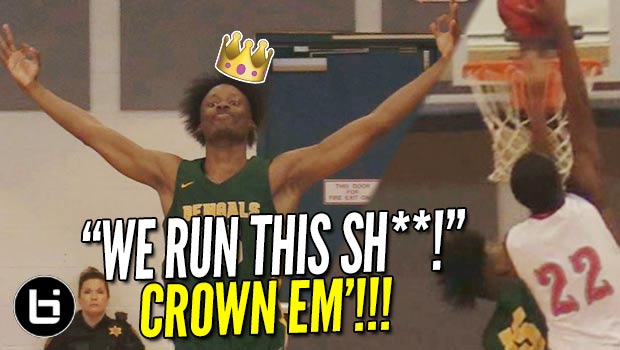 article by By Joe Sirera joe.sirera@greensboro.com The Greensboro Day Bengals knew they would have to do something different Saturday if they were going to beat the ...(Read more)

The Greensboro Day Bengals knew they would have to do something different Saturday if they were going to beat the Wesleyan Trojans in the NCISAA Class 3-A boys basketball championship game.

Wesleyan had won the PACIS rivals’ regular-season meetings 66-52 and 57-41 and was the top seed against a Greensboro Day team that dropped four straight games in late January and early February after losing senior Will Dillard to a blood clot in his right lung. But with a state title on the line at Forsyth Country Day School, the Bengals took control early and came away with a 67-53 victory and their second consecutive championship.

“We came out in attack mode this game,” said senior forward Alex Michael. “The first two games we were a little timid, a little nervous maybe, and let them dictate what we did. This time we came out and attacked them and forced them to play our style of basketball, and we got the lead and never looked back.”

“We knew they were going to try to punch us in the mouth,” said Bengals senior swingman John Newman, “so we had to beat them to the punch and set the tone. We knew that if we were with them in the fourth quarter we’d be able to put it on ice.”

It started with defense, as it usually does, for the Bengals.

“The difference was that defensively we were more aggressive in the lane area, double-teaming Hoard,” coach Freddy Johnson said, referring to Wesleyan forward Jaylen Hoard. “We also backed up to the 3-point area and decided not to pick them up full-court because the two Langleys (twins Keyshaun and Kobe) blew right by us the first two games.”

Keyshaun Langley scored 12 points and Kobe added four Saturday, but most of those came in the fourth quarter when a Trojans comeback ran out of steam after Wesleyan closed to 57-50 with 1:33 to play.

Aaron Wiggins led Wesleyan (27-6) with 18 points and Shawn Walker added 17, but Hoard did not score. Both coaches said Greensboro Day big man Mike Fowler set the tone early this time by being aggressive against the 6-foot-8 Wake Forest signee.

“This is crazy,” added Newman, a Clemson signee who scored 24 points and was named Most Valuable Player. “I never imagined being at this point in my life and our class making history. It’s so special.”