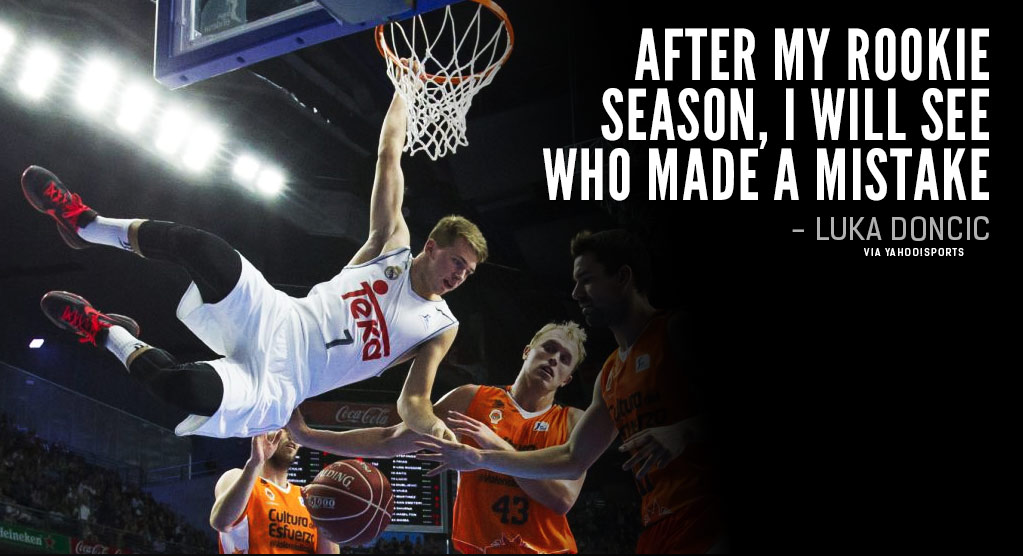 Will the Phoenix Suns take one of the new faces of PUMA basketball (big men Deandre Ayton and Marcus Bagley III) or will they take the ...(Read more)

Luka Doncic Is Ready For His Next Chapter (And To See Who Will Make A Mistake On Draft Night)!

Will the Phoenix Suns take one of the new faces of PUMA basketball (big men Deandre Ayton and Marcus Bagley III) or will they take the baby-faced killer that is Luka Doncic with the first pick in the unpredictable gamble that is the 2018 NBA Draft?

In an interview with Shams Charania of Yahoo! Sports, the 19-year-old “playmaking prodigy out of Slovenia” had this quotable about the Draft and his upcoming season in the NBA:

“Pick one to five, it will be amazing to be selected there, especially for a European guy.” Said Doncic. “I need to show it on the court, because I need to prove it. I can see who made a mistake not drafting me. After my rookie season, I will see who made a mistake. I’m motivated to enter the draft. I’m excited to play in the NBA and play against these stars.”

Depending on who you ask or what Mock Draft you are looking at, Doncic is either a no-brainer at #1 (Bill Simmons will tell you this) or a possible 4th pick by the Grizzlies, a team known for making horrible picks (drafting Steve Francis after he made it clear he doesn’t want to play for them) and trades (trading Kevin Love for OJ Mayo) on Draft night. Unless Doncic has a rookie campaign like Donovan Mitchell while the big men picked ahead play like former Grizzlies No. 2 pick Hasheem Thabeet (selected before James Harden & Steph Curry), I’m not sure “mistake” will be the right word.

Look at the 2009 draft, when Blake Griffin was picked first and missed the entire season with an injury and Tyreke Evans was picked 4th and ended up winning Rookie Of The Year by putting up rookie LeBron numbers. I’m sure the Clippers still didn’t think they made a mistake by taking future 5x All-Star Blake and I’m positive the Thunder were still happy with taking James Harden at No. 3 (so they could later make the mistake of trading him for soon-to-be retired Kevin Martin and a bunch of future picks). As for the Grizzlies, they knew very quickly they made a HUGE mistake with Thabeet, who became the highest drafted player to ever be sent to the D-League.

Anyways, back to the ‘Wonderboy’ Luka Doncic. As we wait to see which team will win the Slovenia Superstar Sweepstakes or make the “mistake” of going big, let’s take a look at this serious but cool ESPN video about Doncic’s journey to the NBA and a very fun video by Bleacher Report about Doncic’s future in the NBA, which includes dating Jennifer Aniston and appearing in a Drake video.