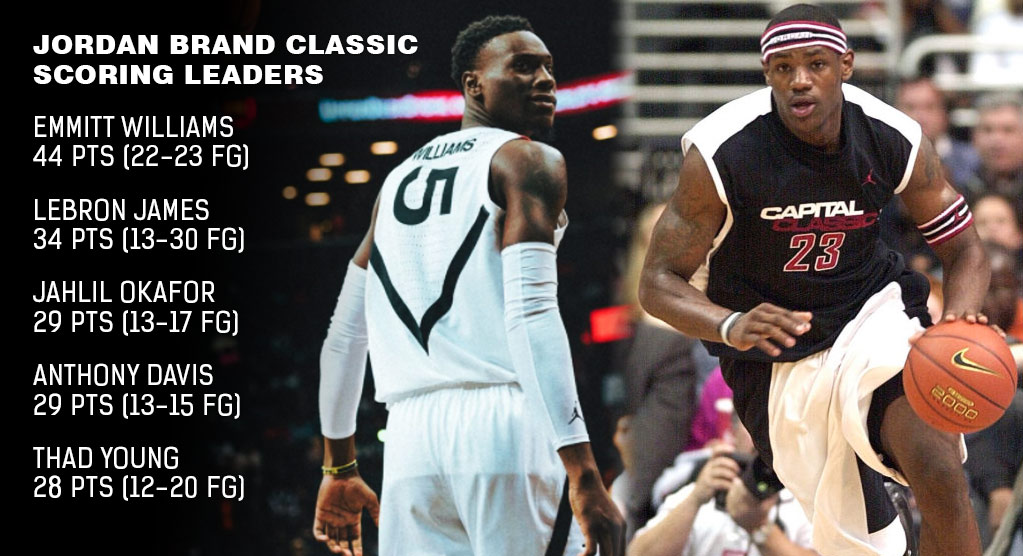 Back in 2003, LeBron James scored a Jordan Brand Classic record 34 points on 13-of-30 shooting in front of the man himself. The young King also ...(Read more)

The previous scoring record was held by Carmelo Anthony (27 PTS) a year earlier in the inaugural game. Since then, Allonzo Trier (28), Thad Young (28), Anthony Davis (29) and Jahlil Oakafor (29) have all passed Melo but failed to catch LeBron.

On Saturday, LSU commit Emmitt Williams not only broke LeBron’s 15-year-old record, he destroyed it by scoring 44 points on 22-of-23 shooting in a win for his Home team.

“I didn’t get to play in McDonald’s, so I’m working my ass off to show I should have been there,” Williams said to USA Today. “Everyone knows I went through that situation, that I didn’t do it and they sat on me and thought I was going to lay down.”

The “situation” he’s referring to was a sexual assault charge that was dropped a couple of months after the allegations.

Here’s his highlights from this past weekend followed by a few videos we made with the high-flying future LSU star.