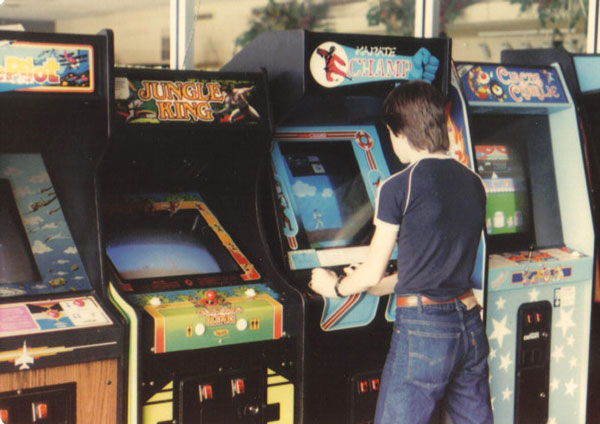 I miss arcades. Real small dark arcades in malls and shopping centers. Dave & Busters, Main Event and places like that are cool, it’s just not as cool as the “NO FOOD OR DRINKS (or women in the case of Saudi Arabia — I lived there for much of my childhood)” arcades of the 80s and 90s.

You just can’t make that dramatic entrance at Dave and Busters, pull a quarter out of a jingling deep pocket of coins and slam it on the machine to let the guy playing Street Fighter know you got next and is about to kick his ass off the machine. It’s just not the same with a Dave and Busters card that you have to swipe.

When NBA Jam came out in 93, I was a fixture at the arcade, slamming quarters and battling any and everybody. My go-to team was the Charlotte Hornets and I can’t tell you how many times a newbie would get on the machine and then complain when they realized Michael Jordan wasn’t on the Bulls.

The GOAT was MIA on NBA Jam (and the NBA Live games) because Jordan owned his own likeness and NBA Jam creator Midway couldn’t pay his licensing fee. Apparently, it wasn’t too much for that silly Chaos in the Windy City game.

The other problem these Bulls fans had against me, along with the help of Larry Johnson and Zo, was finding out Pippen and the Bulls weren’t as good as they should have been.

In an interview with ESPN the Magazine, NBA Jam lead designer Mark Turmell revealed those complainers were kind of right.

Did Scottie Pippen’s ratings in the game really drop when he played certain teams?
It’s true, but only when the Bulls played the Pistons. If there was a close game and anyone on the Bulls took a last-second shot, we wrote special code in the game so that they would average out to be brick. There was the big competition back in the day between the Pistons and the Bulls, and since I was always a big Pistons fan, that was my opportunity to level the playing field. If that rumor clear up wasn’t mind-blowing enough, here’s Mark’s story on the rumor that the game was haunted by the great Drazen Petrovic.

We had already finished making NBA Jam when Drazen Petrovic died. The game had already shipped and he was on the Nets. So we had all of these coin-op machines around, and one night we were playing Mortal Kombat and there was a Jam machine next to it, and all of a sudden the game started calling out “Petrovic!” “Petrovic!” And this only happened after Petrovic had died. Everyone started freaking out. Something weird was going on with the software, and to this day, if you have an original NBA Jam machine every once in a while it will just yell out “Petrovic!” It’s wild.

The last great story from the interview is the revealing that there’s a handful of arcade versions out there with Michael Jordan and Gary Payton on them; I just added owning one of them to my bucket list.

The most interesting one was the team of Gary Payton and Michael Jordan. Payton didn’t make the cut to be in the game, and of course, Jordan pulled himself out of the licensing of the NBA, so we had to pull him out of the game. But one day, I got a phone call from a distributor out on the west coast who told me that Gary Payton was willing to pay whatever it cost to get into the game. So we told him what to do in terms of taking photographs, so he sent in photographs of himself and Jordan, saying, “We want to be in the game, hook us up.” So we actually did a special version of the game and gave both players all-star, superstar stats. There are only a handful of these machines, but Jordan and Payton did end up being in one version of the game

Another great NBA Jam story belongs to Shaq. He loved the game so much, he would actually rent or have the arcade game shipped to hotels he and the Orlando Magic were staying at during road games.

It sounds shocking but I also remember a rookie Shaq renting out an Orlando water amusement park (Wet n’ Wild) for a couple of hours just so he and one of his friends could stay longer and not have to deal with lines.

What I find shocking is Shaq said his favorite player to use in the game was Chris Mullin. I can honestly say I’ve played the game a few thousand times at the arcade and never once played with Mully.