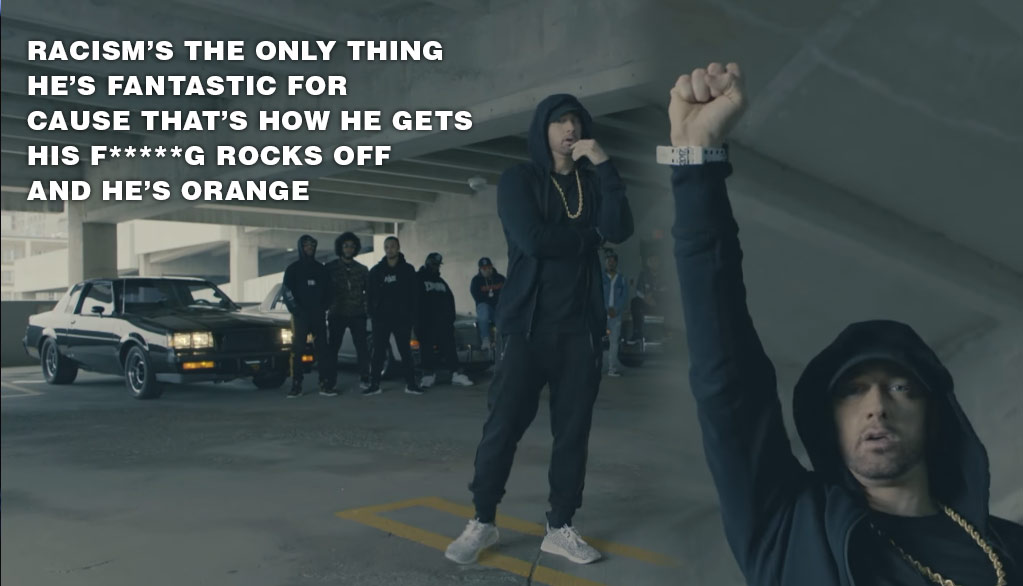 “We better give Obama props ’cause what we got in office now is a kamikaze that will probably cause a nuclear holocaust while the drama pops, ...(Read more)

“We better give Obama props ’cause what we got in office now is a kamikaze that will probably cause a nuclear holocaust while the drama pops, and he waits for shit to quiet down, he’ll just gas his plane up and fly around till the bombing stops.”

During Tuesday night’s BET Hip-Hop Awards, Eminem dropped a four-minute freestyle blasting Donald Trump. The video of the freestyle, posted online by BET’s twitter account, instantly went viral and was shown love by celebs and athletes, including LeBron James, who reposted one of Em’s best lines: “Racism’s the only thing he’s Fantastic for cause that’s how he gets his fucking rocks off and he’s orange.”

The tweet by James, along with tweets by other NBA players are posted below one of my favorite lines about the “racist 94-year old grandpa.”

“Same shit that he tormented Hillary for and he slandered then does it more. From his endorsement of Bannon, support for the Klansman, tiki torches in hand for the solider that’s black and comes home from Iraq and is still told to go back to Africa.”