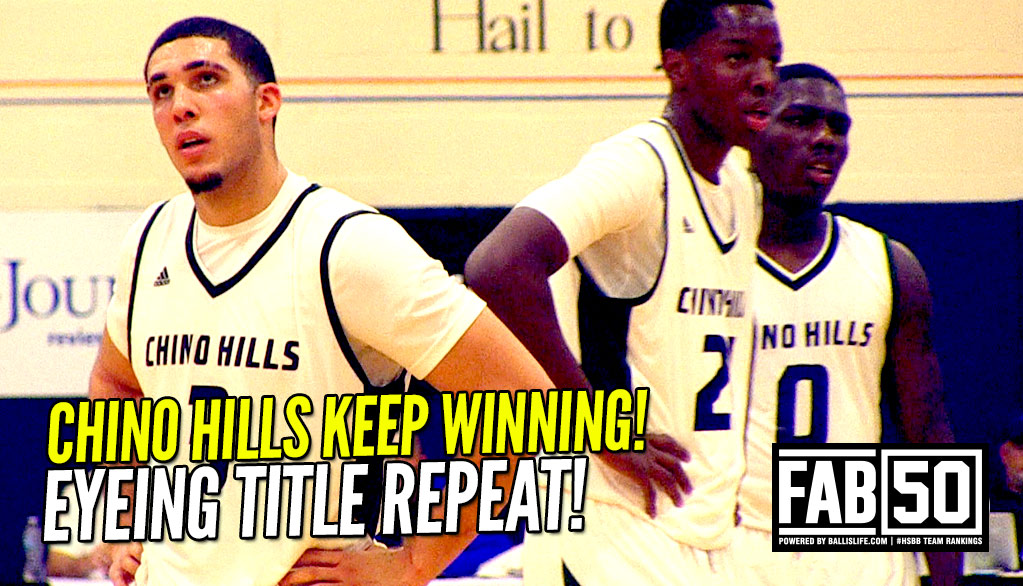 Defending FAB 50 Mythical National Champ Chino Hills (Calif.) keeps on winning and climbing in the latest edition of the FAB 50 National Team Rankings powered by Ballislife.com. Results from around the country and previous events push the Huskies into the top five. There are seven newcomers this week including perennial FAB 50 contenders Greensboro Day (Greensboro, N.C.) and Lincoln (Brooklyn, N.Y.).

When 2015-16 Mr. Basketball USA Lonzo Ball moved on to UCLA, the conventional thinking was Chino Hills (Calif.) would still have a nationally-ranked unit with its four other returning starters, but would drop a notch from the 35-0 national championship club. After last weekend’s rout of previous No. 50 Wasatch Academy (Mt. Pleasant, Utah) at the Rolling Hills Prep State Preview Classic, Chino Hills upped its current wining streak to 58 games and talk of another CIF Open Division state title and possible repeat national title is beginning to grow louder.

It’s evident this year’s team has has more depth and the four returning starters have each improved their individual games, mostly noticeably Ball’s youngest brother, 6-foot-2 sophomore point guard La’Melo Ball. He’s taken over the reigns at the one quite nicely from his older brother, has grown physically and is doing a better job of getting by defenders and finishing at the rim than last season. He scored 33 points and dished out 15 assists in the 106-80 victory over Wasatch Academy in a game the Huskies controlled throughout.

Chino Hills now owns the fourth longest winning streak in California history, according to Cal-Hi Sports, and is eight victories from tying the reported state record of 66 held by Compton (1967-69). The victory also catapulted the Huskies into the top five, with a legit shot to keep climbing, after Imhotep Charter (Philadelphia, Pa.) ventured down to Florida this past weekend and captured the Montverde Academy Invitational over the host school. Many were shocked to see Brother Andre Noble’s club down the Eagles 57-48 in the title game to snap Montverde Academy’s 55-game home winning streak, but for our purposes all it did was move the Panthers up two spots in the latest edition of the FAB 50 National Team Rankings powered by Ballislife.com.

Imhotep Charter moved up to No. 6, one spot behind Chino Hills, as it took an early lead and never relinquished it in the title game. Sophomore Donte Scott scored a game-high 17 points and Rhode Island commit Daron Russell, one of the country’s most under appreciated talents, was named Tournament MVP. Imhotep defeated bubble club Rainier Beach of Seattle (79-50) and Florida’s Windermere Prep (80-54) to advance to the title game.

It was considered to move IMG Academy (Brandenton, Fla.) up a spot in front of Chino Hills, as that club has an impressive overall resume, but Chino Hills handled Wasatch Academy a lot easier than the Ascenders did when they defeated the Utah independent, 61-51, at the Hoophall Classic in Massachusetts in a game that was in single-digits for a majority of the contest. Chino Hills led Wasatch Academy 60-35 at halftime and we also felt it was still necessary to keep IMG Academy behind Montverde Academy because of the head-to-head factor.

Chino Hills can tie the reported state record of 66 straight wins in the CIF Southern Section Open Division semifinals against a likely FAB 50-ranked foe and would attempt to break the mark in the section title game. It all holds to form that would likely be against FAB 50 No. 2 Sierra Canyon (Chatsworth, Calif.). Only by breaking the record and beating Sierra Canyon can Husky fans start seriously talking about a repeat FAB 50 title — if their favorite club can get by No. 12 Oak Hill Academy (Mouth of Wilson, Va.) this weekend at the Nike Extravaganza in Southern California this is.

That won’t be an easy task and since coach Steve Smith’s club already has three losses it can play loose and has plenty of incentive to win this upcoming game. Chino Hills is now considered the favorite and credit goes to its improved players, because that wasn’t the case in the preseason when this game was put on the schedule.