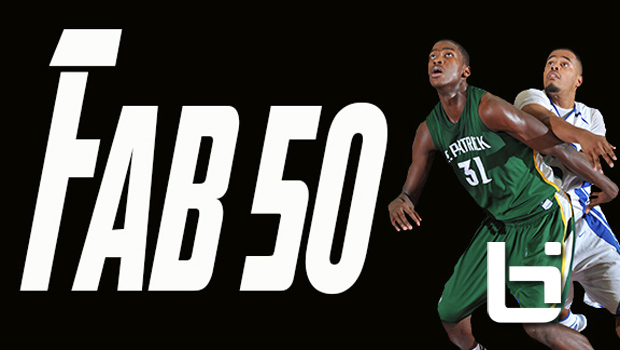 Some states have already wrapped up their seasons and many others will crown state champions this upcoming weekend. As the season comes to a close, we ...(Read more)

Some states have already wrapped up their seasons and many others will crown state champions this upcoming weekend. As the season comes to a close, we reward teams in the FAB 50 National Team Rankings powered by Ballislife.com whose resumes have been good enough to crack the list without a blemish. High-risers this week include H.D. Woodson (Washington, D.C.) and Blackman (Murfreesboro, Tenn.). Among three newcomers, one is unbeaten Shenendehowa (Clifton Park, N.Y.).

Public schools in Washington, D.C. don’t get the notoriety many of the private and parochial schools in the region do, but it doesn’t mean there isn’t good basketball played in programs where there isn’t any tuition to pay in order to attend.

According to head coach Trey Mines, many of the players in his program at H.D. Woodson (Washington, D.C.) come from rough backgrounds and don’t have it easy. The everyday struggle makes what transpired on the court this season, particularly in the past week, that much sweeter.

This past Thursday night, Woodson senior Kavon Montgomery was shot in the back near his home hours after the Warriors knocked off Gonzaga (Washington, D.C.) 105-102 in double overtime in the D.C. State Athletic Association semifinals behind Kiyon Boyd’s 37 points. Gonzaga was previously ranked in the FAB 50 National Team Rankings powered by Ballislife.com and comes from the WCAC, arguably the nation’s top basketball conference and one that has had as many of four of its programs nationally-ranked at the same time in recent seasons.

H.D. Woodson proved it could play with any team in the region and climbed in the Washington Post’s weekly rankings as the season wore along. The Warriors capped off a improbable season, and luckily avoided tragedy as Montgomery wasn’t seriously hurt and was able to play in Woodson’s next game: a 60-47 win over Friendship Collegiate (Washington, D.C.) in the DCSAA title game.

Montgomery netted the Warriors’ first field goal, senior Antwan Walker led the way with 19 points, while Boyd contributed 11 to cap off an unbeaten season. With its unblemished mark (Woodson won one game via default), the Warriors became the first D.C. public school to finish undefeated since the 1984-85 season, according to the Washington Post.

With its 32-0 on-court record, H.D. Woodson moves up 13 spots in this week’s FAB 50, as we will continue to reward deserving teams that finish undefeated from here until the final poll on April 4.

As noted in the FAB 50 rankings, many teams have won conference or state championships to conclude their 2015-2016 season. For some teams, such as previous No. 19 Wayne (Huber Heights, Ohio), which was upset by Lakota East, 60-57, in a OHSAA Division I district title game, the season ends with a loss. The overall resume, however, is still good enough to be considered for the FAB 50.

H.D. Woodson’s default win is noted, but as is the case with other teams that have won titles such as No. 15 Greenforest Christian Academy (Decatur, Ga.) and No. 40 Miller Grove (Lithonia, Ga.), its season may not be over. That’s because those three state association member clubs and other independent programs are under consideration for the eight-team field at the Dick’s Nationals to be played in New York March 31-April 2.

There would be some Tile IX limitations, but as the event approaches a decade in existence, we’d love to see the Dick’s Nationals field expand to 16 teams.