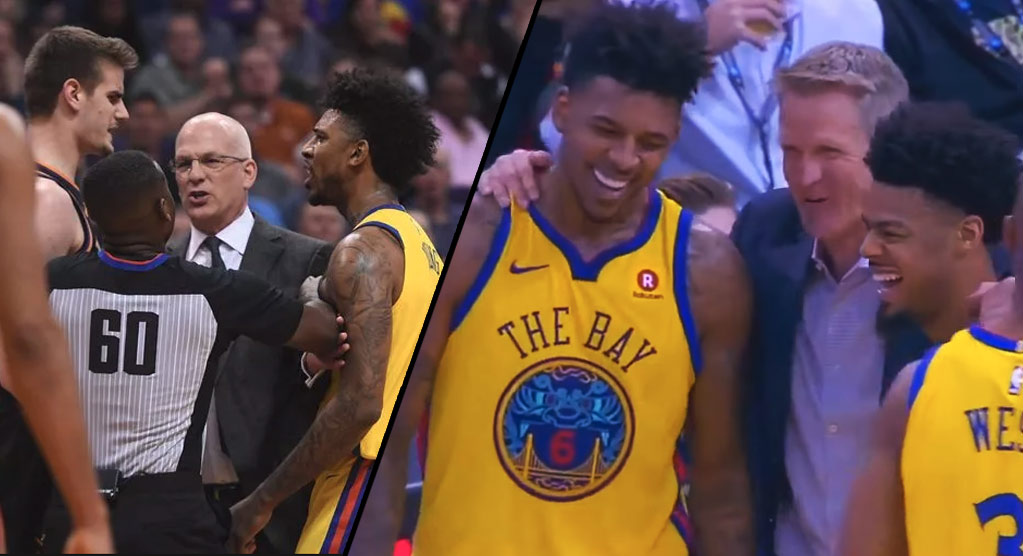 This clip shows how worried the short-handed Warriors were against the Suns. Down by nine in the first half without All-Stars Steph Curry, Kevin Durant & ...(Read more)

This clip shows how worried the short-handed Warriors were against the Suns.

Down by nine in the first half without All-Stars Steph Curry, Kevin Durant & Klay Thompson, the always smiling Nick Young got into a “modern NBA scuffle” with Dragan Bender of the always grumpy and fighting Suns. Instead of being chewed out by Coach Steve Kerr, Young was met with a hug and jokes. The refs hit Young and Bender with techs and Bender’s coach replaced him with Marquese Chriss, fresh off of getting fined $25,000 for pushing Ricky Rubio and getting into a scuffle with the Utah Jazz.

The Warriors responded by outscoring the Booker-less Suns 42-25 in the 3rd and winning the game 124-109. Young finished with 20 points, which is the most he’s scored since his 23 in the first game of the season. He also had a season-high 7 boards.

Speaking of season-highs, young Josh Jackson went off for a career-high 36 points on 14-of-23 shooting in 36 minutes off the bench for the struggling Suns, losers of 17 of their last 18 games.

Young and Suns fans might remember back in 2014 when Swaggy P got into a scuffle with Alex Len and threw a punch at Goran Dragic. OK, I’m seeing a trend here. I’m assuming Young isn’t fond of Dragons found in the city of Phoenix.