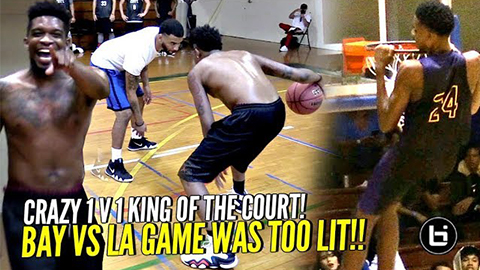 The first ever 2HYPE + Bay vs LA Showcase Games presented by Ballislife is in the books and it was awesome! On the first night we ...(Read more)

The first ever 2HYPE + Bay vs LA Showcase Games presented by Ballislife is in the books and it was awesome! On the first night we had a practice session and everyone’s surprise, OSN actually was killin it! The high schoolers were on point too and had a nice some nice 1-on-1 battles of their own. On Saturday August 18 during the actual Bay vs LA game, team L.A.’s Mobley brothers came out strong from the start! Evan Mobley of team L.A. and Robby Beasley of team Bay were named co-MVPs!

SAN FRANCISCO, CA – In the inaugural 2HYPE + Bay vs. LA Showcase Basketball Games presented by Ballislife, the Northern California team had a talented and motivated club, not to mentioned a YouTube-driven pro-Bay crowd, in its attempt to knock off the favored Southern California club. What it didn’t have, however, was 6-foot-11 junior Evan Mobley on its side, and his dynamic play ultimately turned out to be the deciding factor as L.A. rolled to a 122-116 victory over the Bay before over 1,000 fans at historic Kezar Pavilion near Golden Gate Park.

Mobley, from Rancho Christian (Temecula, Calif.), capped off a spectacular summer with 25 points, 14 rebounds and five blocked shots to lead the L.A. team to a wire-to-wire victory following the Bay’s first made basket to open the scoring. It was a performance typical of what Mobley did in big games this summer on the grassroots circuit to elevate himself to the point where many consider him the best long-term prospect currently in the high school basketball ranks.

The SoCal club led 12-2 behind the inside play of Mobley and his older brother, USC-bound 6-foot-9 senior Isaiah Mobley (Rancho Christian, Temecula, Calif.), who finished with 18 points, seven rebounds and four assists. L.A. went up 61-33 at one point in the first half, but the Bay closed the first half strong, including a 15-4 run, to trail 65-50 at halftime.

The Bay’s game effort was led by 6-foot-2 junior Robby Beasley of Dublin (Calif.) and 6-foot-3 senior Nimari Burnett of Prolific Prep (Napa, Calif.). L.A. once again opened up the game in the second half, taking a 92-69 lead, but behind a crowd loudly cheering its every basket, the Bay put together another big rally. The Bay used a 21-4 run to cut its deficit to six (96-90), but L.A. hit enough timely shots and the NorCal club couldn’t come up with enough paint stops to get over the hump.

Evan Mobley was a relative easy MVP choice for the winning L.A. club while Beasley edged Burnett for Bay team MVP. Beasley came in with a great approach towards practice and it carried over to the game, as he gave great effort on both sides of the ball, finishing with 18 points, nine rebounds, two assists and two steals. Burnett knocked down two early 3-pointers to help the Bay get back in the game and finished with a team-high 20 points, eight rebounds and two rebounds. The Bay’s Keshad Johnson, a bouncy 6-foot-7 senior wing from Envision Academy (Oakland, Calif.), drew rave reviews from his peers and finished with 16 points and six rebounds. Will Chaverin, a 6-foot-4 senior small forward from Bishop O’Dowd (Oakland, Calif.), added 12 points and six rebounds for the Bay. Coleman Hawkins, a 6-foot-9 forward who will transfer from Antelope (Calif.) to Prolific Prep (Napa, Calif.) for his junior season, added 12 points, six rebounds and two assists.

Despite the star-studded talent in the high school game, the crowd was even more hyped up for the YouTube celebrity game and fittingly it was the biggest star of team 2HYPE that earned MVP honors for his victorious team.

Jesser, who is also known as JesserTheLazer, finished with 18 points to lead 2HYPE to a 84-68 win over the Off Baller$. Jesser, with the crowed chanting “MVP, MVP” every time he touched the ball, stole the show with a spin move in the key that rocked his defender and followed that fancy scoring bucket with a 3-pointer from five feet behind the NBA 3-point line on 2HYPE’s next possession. The bonafide YouTube star finished with 18 points.

The celebrity game MVP for Off Baller$ was DAX, who doubles as a skilled basketball player and rapper. He finished with 21 points, including three 3-pointers. He also won the Youtube celebrity 3-point contest, making 17 of 25 shots from behind the arc. Lucas won the high school portion of the 3-point contest, besting Kyman.

The YT celebrity game’s leading scorer was Jeron Smith of Off Ballers, who made a variety of shots to finish with 25 points. Zack and Cash Nasty added 15 and 13 points, respectively, for 2HYPE.