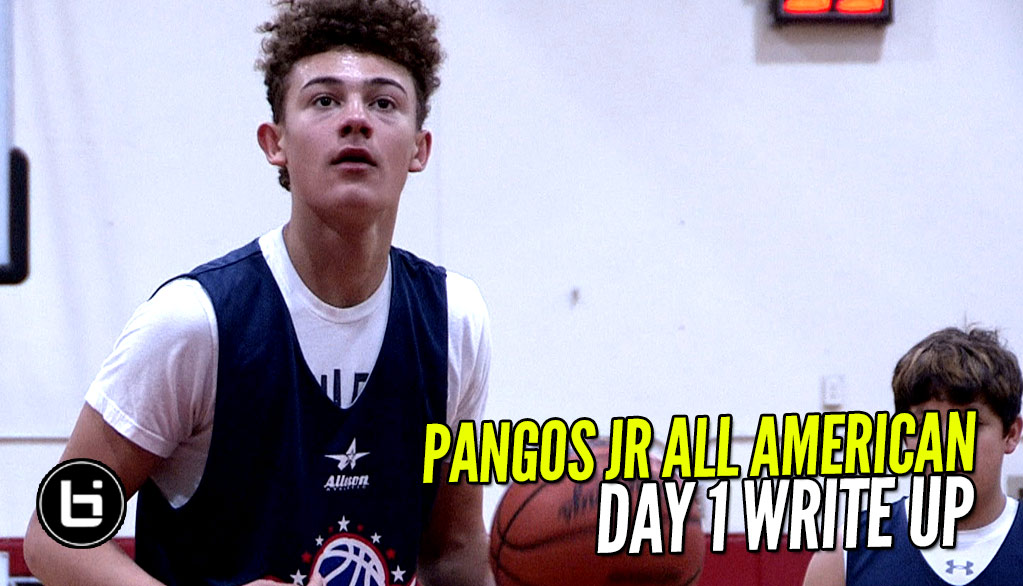 In a showcase camp designed for some of the nation’s standout eighth and seventh graders, 6-foot-8 Pape Momar Cisse, a versatile post player from Fairmont Prep ...(Read more)

Pape is The NAME at Pangos Jr. A-A Camp!

In a showcase camp designed for some of the nation’s standout eighth and seventh graders, 6-foot-8 Pape Momar Cisse, a versatile post player from Fairmont Prep (Anaheim, Calif.) via Senegal, put himself on the map with two show-stopping performances on the first day of the 2017 Pangos Jr. All-American Camp. Some of the other standouts included a strong contingent from Seattle, Wash., among them 6-foot-2 John Christofilis and 5-foot-10 Myles Phillips. Check back on Sunday for Day One RAW highlights!

Westminster, Calif. — The purpose of the two-day Pangos Jr. All-American Camp held over the weekend at Westminster High School in Southern California is to give some of the West Coasts’ top middle school players exposure to an elite camp setting and test their skills against other high level middle school talent.

The camp is actually expanding in terms of national scope and there were actually players from as far away as Montana and Texas. The most impressive player on the first day was a local player listed from near-by Fairmont Prep in Anaheim, Calif., who actually hails from Senegal. Pape Momar Cisse is his name and the 6-foot-8 2021 prospect (eighth grade) displayed an advanced post skill set for a young player who hasn’t had alot of exposure to an American youth camp setting and has only been in the United States for six months.

Cisse was making the correct play on every touch,  whether shooting the ball or not, and has an advanced feel plus solid footwork. The left-hander was efficient utilizing a half or sweeping hook and displayed patience in the post to let secondary defenders clear or find an open teammate. He also can face up and attack or shoot the elbow jumper and hustles to protect the rim on defense. It’s evident the young post player is a future high major D1 talent with a good combination of aggression and humility to his game.

In the camp’s first game, Cisse did battle with another talented big man in 6-foot-10 Christian Bento of Vail Ranch MS (Temecula, Calif.) and it brought out the best in him down the stretch. Bento displayed competitive fire and worked hard underneath the glass, but Cisse just has a bit more in his repertoire at this stage in their development. In his second game, Cisse displayed more of a face-up game and was taking defenders off the dribble. In both games, the play underneath was physical and Cisee relished it with unusual composure for a middle school prospect.

There was another great matchup in that same game out on the wing between a pair of 2021 prospects: 6-foot-2 Devin Askew of Anaheim, Calif. and 6-foot-4 Malik Thomas of Alta Loma, Calif. Askew, who is originally from Sacramento, had his deep jump shot going and has a variety of moves off the triple threat. He’s ultra confident in his game and hasn’t even fully shown his complete package because he’s so advanced compared to a majority of the campers at this stage in their development. That opportunity could come Sunday during the Cream of the Crop Top 20 All-Star Game.

Thomas is a veteran on the middle school camp scene and has his usual power guard skill on full display. Thomas, the cousin of San Diego St. guard Jeremy Hemsley, is not an elite vertical athlete, but knows how to use his broad shoulders and powerful frame to create separation and scoring opportunities. He also is a capable defender who has a chance to be one of the most impactful freshmen on the SoCal basketball scene next fall.

In a setting in which young players can tend to over-handle or overt exert in an attempt to make a positive impression, one of the most efficient players was 6-foot-2 2021 prospect John Christofilis from Seattle Academy (Seattle, Wash.). Christofilis was filling up the stat sheets with his ability to fill lanes or find gaps in the half court defense. No player was better in triple threat attacking and looking for openings than Christifilis.

He was not the only standout from the Emerald City, as 5-foot-10 Myles Phillips of K12 International (Seattle, Wash.) also stood out. The eighth-grader (2021) has a lethal combination of excellent blow by ability and speed in the open court that he knows how to use. He can make shots from all three levels and is an IQ player with the hunger to get better. He also used the camp’s drill  and Q & A session and down time to talk to scouts and veteran observers in attendance, picking their brains on how to get better and understand what he’s seeing from a self-evaluation standpoint.

Phillips teamed up with Devon Barnes to form a potent backcourt combo. Barnes, a 5-foot-8 2021 prospect from Ft. Irwin (Los Angeles), was one of the fastest players in the open court, consistently beating defenders in transition for easy buckets. He also is quite effective in the half court setting and played with a tremendous amount of energy on both ends of the floor.