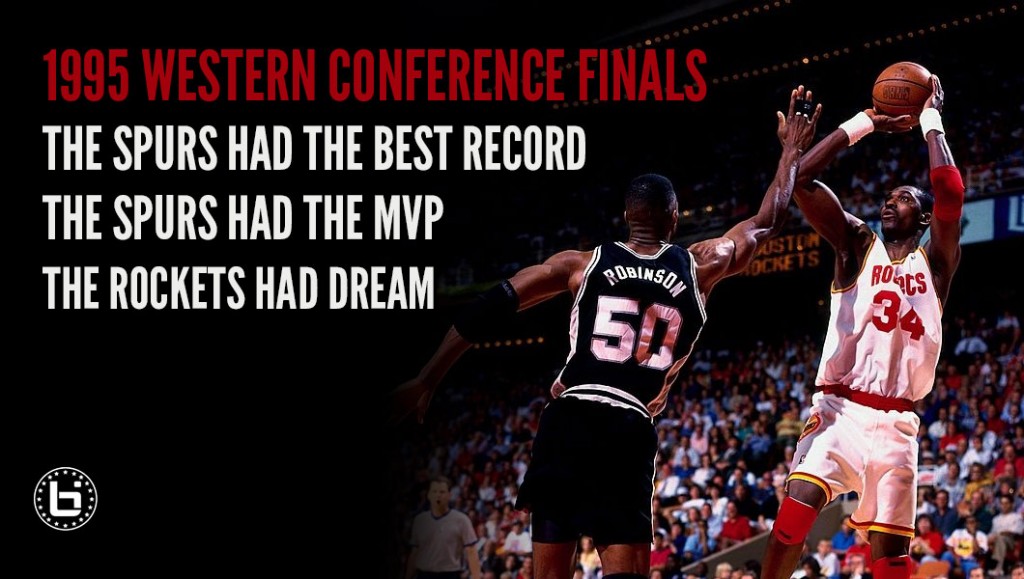 Fresh off of sweeping the Nuggets and beating the LA Lakers, the team with the best record in the league and the league (deserving) MVP was ...(Read more)

Remembering When Hakeem Dominated MVP David Robinson In The 1995 Playoffs

Fresh off of sweeping the Nuggets and beating the LA Lakers, the team with the best record in the league and the league (deserving) MVP was ready to take out the defending champs. But the Rockets and Hakeem The Dream were ready to end the Spurs dream season right from the start of the Western Conference Finals: The Rockets pulled off a one-point Game 1 win in San Antonio and a convincing 10-point win in Game 2 behind 41 points and 16 boards from Olajuwon. The Spurs got some payback by taking Game 3 in H-Town, despite another 40 point performance by Olajuwon, and then beating them again in Game 4, while holding Hakeem to 9 of 24 shooting.

“I think we figured out what got us here,” said David Robinson after a 22-point victory in GM4. “In these two games, our backs were against the wall. You can’t be world champions if you can’t dig down deep.”

The bad dream was over thought the people of San Antonio. They thought wrong and when David Robinson said Hakeem is “only human and can’t score 40 points every game” after Game 4, he was also wrong.

In Game 5, Hakeem went into nightmare mode and pulled out every move from his book of moves and added a few more chapters as he embarrassed the Admiral play after play. The final result was a 21-point victory for the Rockets and Hakeem finishing with 42/9/8 to Robinson’s 22 & 12.

Game 6 was a closer game but the match-up between the two centers was much of the same: Hakeem finished with 39 points, 17 boards and 5 blocks as Robinson struggled to reach 19 points on 6 of 17 shooting; only two of Robinson’s six field goals were made against Hakeem.

Six days after ending the Spurs season in a Texas shootout, the Houston Rockets went into Orlando and stole Game 1 from Shaq and the Magic. Seven days later, the Rockets were celebrating a sweep of the NBA finals and Hakeem was once again the Finals MVP.