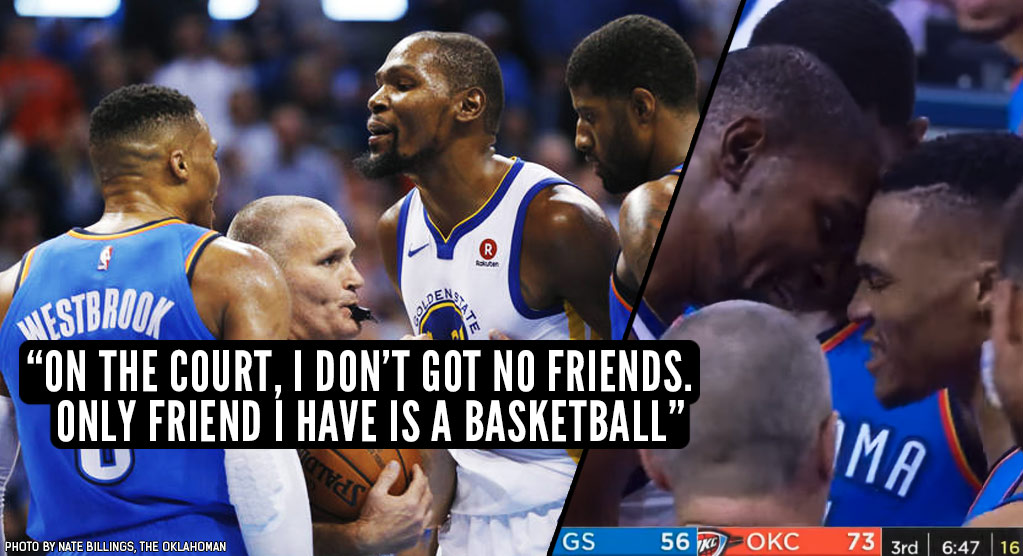 The moment we all wanted to see happened midway through the third quarter of the Thunder’s win over the Warriors on Wednesday. Kevin Durant drives to ...(Read more)

Russell Westbrook Says, “Only Friend I Have Is A Basketball” After Heated Win Vs Durant & The Warriors

The moment we all wanted to see happened midway through the third quarter of the Thunder’s win over the Warriors on Wednesday.

Kevin Durant drives to the basket, has the ball knocked out of bounds by Russell Westbrook, who then shakes his head in a “hell naw, that’s not happening!” way. Durant follows and jaws at him until they end up face-to-face, touching heads and spitting sweet nothings at each other. The two former teammates are separated by Steven Adams. A wild-looking Durant slaps Adams away, smiles and claps around the court until the games resumes and he misses a shot under the basket. Westbrook’s new teammate Carmelo Anthony gets the board and passes it to other new teammate Paul George, who knocks down a three-pointer to put the Thunder up by 20. Westbrook celebrates by putting his hand to his ears and asking the home crowd to make more noise.

After the game, Durant wasn’t in any mood to answer questions about the moment.

“Did you watch the game or did you just watch the scuffles?” Replied Durant, when asked about his crowd-pleasing interaction with Westbrook. “That’s just ball. He’s competitive, I’m competitive. We like to go at, both of us. That’s just part the game. So I respect it.”

As expected, Westbrook gave a headline-worthy response when he was asked about playing his former teammate.

“I play the same way against Kevin, against the Pistons’ Reggie Jackson, Dennis Smith from Saturday.” Said Westbrook after putting up a game-high 34 points, grabbing 10 boards and missing a triple-double by one assist. “It don’t matter who it is. On the court, I don’t have no friends. Only friend I have is a basketball. That’s it. And I would say my teammates. I go out compete on a high level and been that way since day one. That’s what I do.”