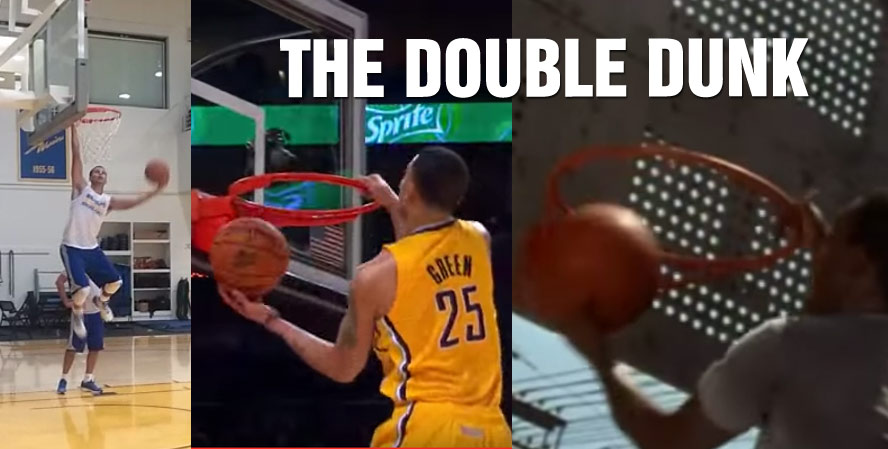 Stephen Curry isn’t exactly known for dunking – although he likes to show he does have some hops at his summer camps – but on Tuesday he pulled off ...(Read more)

Stephen Curry isn’t exactly known for dunking – although he likes to show he does have some hops at his summer camps – but on Tuesday he pulled off the famous double dunk by streetball legend Earl “The Goat” Manigualt….sort of.

The dunk by the man who Don Cheadle played in the film ‘Rebound’ involves dunking the ball and then catching it right when it goes through the hoop with the other hand and dunking it again. Sounds impossible and pretty exciting and if you go to the 2 minute mark of this scene from ‘Rebound’ you can see how it’s done.

Supposedly the 6’1 Earl was able to pull this dunk off in games and supposedly the Rucker park crowd would  go insane everytime he did it.  The same can not be said for Gerald Green.

In 2013, Green participated in one of the most disappointing dunk contests of all-time and one of the reasons why the contest was so disappointing was because of this dunk.  First off, it took a minute for them to cut the net which also caused a bored Charles Barkley to get annoyed. Then Kenny Smith spoiled the surprise by saying what dunk Green was about to attempt. Then Gerald Green missed the dunk 9 consecutive times during the timed round.  Because the NBA changes the contest rules every year, Green was given another shot at making the dunk and he missed again.  After receiving a score of 32, Green attempted the dunk one more time and made it but the reaction from the crowd, judges and announcers was far from that of the people in the Rebound clip above.

Later that year, Harlem Globetrotter Chris Staples did a better version of the dunk – but he did have the benefit of the net slowing the ball down.