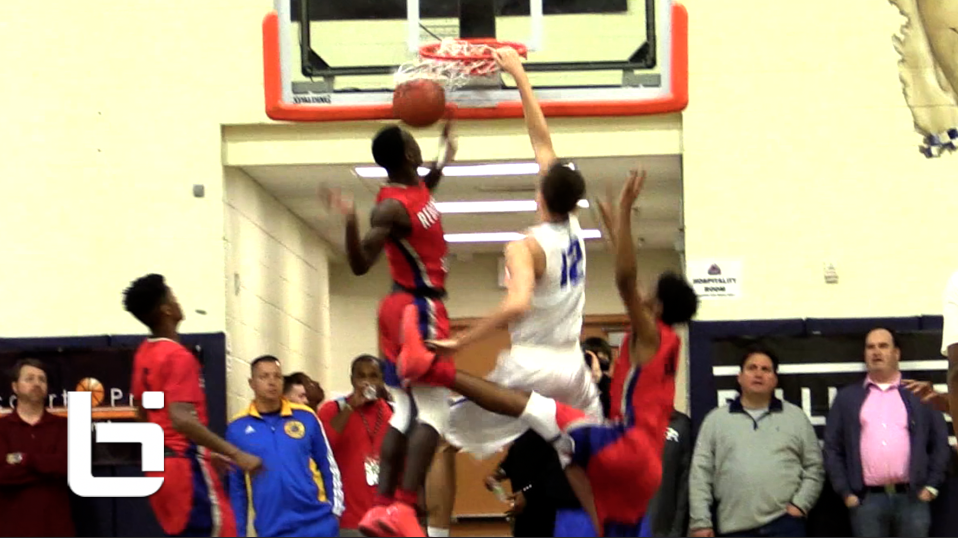 Day two at the 2015 Tarkanian Classic is in the books and it will be teams from four different states in the platinum division semifinals at ...(Read more)

Day two at the 2015 Tarkanian Classic is in the books and it will be teams from four different states in the platinum division semifinals at the Orleans Arena: Sagemont (FL) vs. Bishop Gorman (NV) and Overland (CO) vs. Bingham (UT).  We preview the semifinal match ups and recap the quarterfinal games.

Bingham (Utah) 80,  Centennial (California) 69
Bingham was impressive for the second consecutive game, jumping all over the Huskies and holding on after BYU-bound Yoeli Childs (19 points) fouled with approximately five minutes remaining in the second half. Bingham had a great all-around team effort and was well-prepared to play. Schyler Shoemaker, a 6-foot-4 senior guard, added 17 points while Dason Youngblood, a 6-foot-2 junior guard, added 15 points.  Ike Anigobu, Centennial’s UCLA-bound center, had some highlight blocks and finished with 24 points. On his 16th birthday, junior Jalen Hill added 14 points for Centennial, which rallied in the second half but just couldn’t overcome the slow start.

Sagemont (Florida) 68, Prestonwood Christian Academy (Texas) 61
Six-foot-11 Schnider Herard of Prestonwood had a big game inside and kept pounding away to keep his team in striking range, but Sagemont was just so balanced and skilled. The Lions’ Tomas Verbinskis, a 6-foot-6 junior, scored 17 points, as did 6-foot-8 Tyler Polley, who is proving to be one of the best underclass players in the South. He can face up and knock down the perimeter shot as power forward and has made quite the impression on national scouts so far at this tournament. Luis Hurtado, a 6-foot-6 junior, added 12 points for Sagemont.

Overland (Colorad) 49, Dillard (Florida) 45
Dillard gave Indiana-bound Deron Davis plenty of attention, but the perimeter players surrounding him have proven to be much improved from last season. The best of the lot is 6-foot-2 Jervae Robinson, who followed up a 19-point performance in a first round win over Long Beach Poly with a 21-point outing. Robinson is has plenty of offensive moves and is a quality finisher around the basket. Sophomore Stanley Garner, a 6-foot-1 guard, led Dillard with 17 points.

Bishop Gorman (Nevada) 63, Redondo Union (California) 58
The host school held off a scrappy club that refused to go away, as the Seahawks dropped their first game of the season after winning their own Pac Shores Tournament before Thanksgiving. Zach Collins, a Gonzaga recruit, had a big game with seven points, 13 rebounds and eight blocked shots before fouling out. As predicted, Collins’ size and aggressiveness proved to be too much to handle for the shorter team. Gorman also got a stellar performance from junior wing Charles O’Bannon Jr. He finished with 24 points, making 3-of-5 3-pointers in the process, and five assists. Junior guard Christian Popoola Jr. added 13 points. Seniors Morgan Means and Leland Green combined for 30 points for Redondo, which means netting 20.

Overland (Aurora, Col.) vs. Bingham (South Jordan, Utah), 4 pm pt
It will be Overland’s steady and solid guard play versus Bingham’s spectacular execution in the open court. Yoeli Childs is getting up the court and in position faster than the bigs guarding him, so DeRon Davis will have to keep pace. On the bigger Orleans Arena floor and the different depth perception, the team that executes down the stretch and limits the crucial turnover will pull it out.

Bishop Gorman (Las Vegas, Nev.) vs. Sagemont (Weston, Fla.), 5:30 pm pt
Tyler Polley versus Charles O’Bannon Jr. will be worth the price of admission. Polley is proving to be one of the better forwards in the tournament. Gorman has just as many scoring options as Sagemont, but it struggles at times with its ball-handling when Christian Popoola Jr. is not in the game. If he doesn’t have a steady game, Sagemont will have an excellent chance to steal the game from the Gaels.