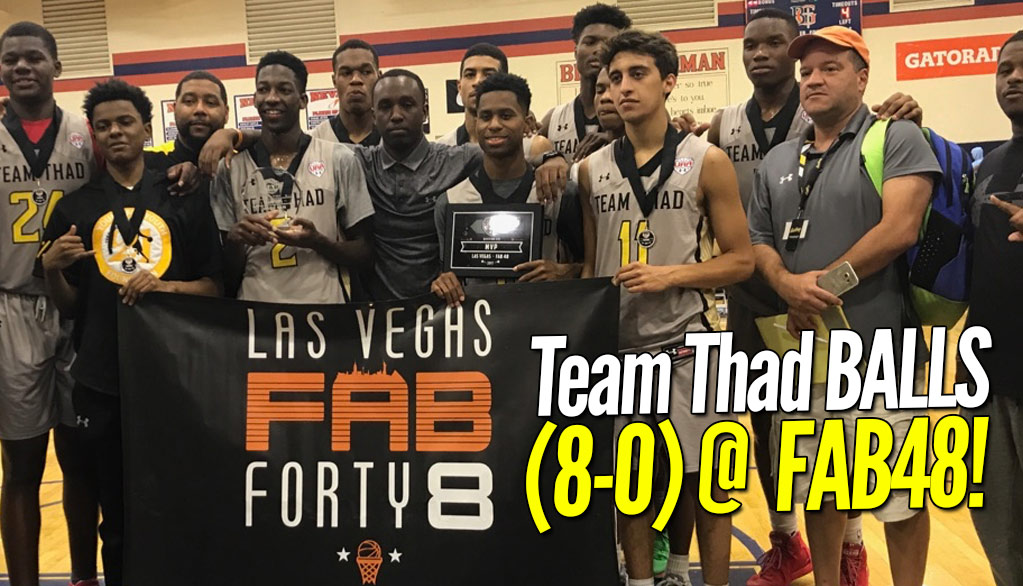 Team Thad (Tenn.) relied on its relentless attack of the basket and the stellar play of guard Tyler Harris to capture the Las Vegas Fab 48 ...(Read more)

Team Thad had plenty of motivation entering the Las Vegas Fab 48. The Tennessee-based club, particularly its head coach Norton Hurd, felt it should have won the Under Armour Association (UAA) Circuit title during July’s second live NCAA evaluation period. Team Thad was a top seed, but finished in third place after a semifinal loss to Team Charlotte (N.C.).

Team Thad atoned for the upset loss by capturing the 17U Invitational title with a 77-61 victory over the New York Rens to win the Fab 48’s 32-team bracket. Team Thad not only won the event’s top division, it went unbeaten in pool play to finish the third evaluation period with a perfect 8-0 record.

The catalyst for Team Thad was uncommitted 2018 point guard Tyler Harris, a 5-foot-10 speed demon from Cordova (Memphis, Tenn.), who is one of the nation’s fast-rising players this summer. He wasn’t a household name on the grassroots circuit before July, but this tournament changed that. There wasn’t a faster (under control) player with the ball in his hands at the three major Las Vegas tournaments than Harris, who went for 18 points and three assists in the title game victory over the NY Rens. He averaged 22.8 points per game over his final four games in the bracket and shoots the 3-pointer just well enough to set himself up to blow by defenders, set up teammates for athletic finishes or simply finish at the rim himself. Harris’ unselfish style also rubbed off on his teammates, as he racked up many hockey assists, while his teammates got him the ball in transition, where he raced past the defense for easy lay-ins.

“I wanted to come here and play well, said Harris, who reported that Cincinnati, Virginia and St. Louis had become involved in his recruitment as of late. “I wanted to end my final AAU season the right way. After UAA finals, my recruitment has picked up a lot.”

“Tyler stepped up his game in July,” Hurd said. “He deserves all the attention he’s getting…he’s one of the top 10 point guards in the country.”

Team Thad’s title run was bolstered by the powerful inside play of 6-foot-6 2018 forward Robert Woodard (Columbus, Miss.), who joined the team for the Fab 48 after playing earlier in the summer for Mebo Elite Team Hood on the Nike Elite Youth Basketball League (EYBL) circuit. He went for 13 points and eight rebounds in the title game, but had plenty of larger offensive outputs earlier in the bracket. Woodard, who is looking to cut his list of colleges by the end of summer, went off in the 72-63 first round win over Meanstreets EYBL (the only game in which Harris didn’t score at least 18 points) with 23 points. He also had 15 points in the 62-58 semifinal win over defending Fab 48 champion Earl Watson Elite UAA, while Harris added 19.

Plenty of credit must also be given to 6-foot-4, 2018 shooting guard Tavin Lovan of Hargrave Military Academy (Chatham, Va.), who netted a game-high 25 points in the title game. Lovan is excellent in transition and does plenty of work on the offensive glass.

By knocking off the NY Rens (who failed to qualify for the Peach Jam on the EYBL circuit) in the final, Team Thad becomes the sixth consecutive Under Armour-sponsored grassroots club to win the Las Vegas Fab 48. The only independent winner was the Kansas City 76ers in 2011, while the Nike-sponsored Oakland Soldiers won the inaugural tournament in 2010.

Coming Out Party for Josh Christopher at Las Vegas Classic

For a majority of the spring and summer, 6-foot-4 2020 wing Josh Christopher was the leading player on Cal Supreme’s 16U EYBL unit, but the coaching staff of the Los Angeles-based, Nike-sponsored outfit decided to move him up to its main club. The move paid dividends as Cal Supreme won the 32-team 17U Platinum Elite Division at the Las Vegas Classic with Christopher not just contributing, but actually leading the way.

The championship game versus the hometown Las Vegas Prospects went to overtime and Christopher settled matters with a spin move floater that gave his team a dramatic 60-59 overtime win. He led his team in scoring with 16 points and also had a clutch performance with 24 points, including three 3-pointers, in a 64-59 semifinal win over Dallas-based RM5 Elite, another EYBL club.

The quarterfinals were an all-California affair and Christopher blocked a final 3-point attempt that helped secure his team’s 68-66 victory over the Oakland Soldiers, the 2017 EYBL Peach Jam champion. Christopher finished with 19 points, while his older brother Caleb (a 6-foot-1 2018 prospect) also made some key defensive plays down the stretch. He finished with six points. Josh had 25 points in the 65-62 quarterfinal win over Dallas Showtime.

The Christophers are out of Mayfair (Lakewood, Calif.), the same school older brother Patrick (who has played in the NBA) attended and Josh and quickly developing into one of California’s best players regardless of class. He is stretching rapidly and quickly gets into his offensive move, which draws a ton of fouls. Like any young player, his shot selection could be better at times, but he has all the tools necessary to be a dominant player on the circuit and in high school basketball the next three years. Pro forward Solomon Hill and NBA legend Shaquille O’Neal (who both were part of Cal Supreme’s coaching staff for the event) raved about his long-term potential.

According to club director Gary Franklin Sr., O’Neal’s son Shareef was usually Cal Supreme’s other big scoring gun in the games he played (he sat out at least three games at this event with a hand injury). The team also got quality games from 6-foot-6 2018 forward Kenyon Martin Jr. of Sierra Canyon (Chatsworth, Calif.) and a big defensive boost from 6-foot-11 2018 big man Fred Odhaimbo (Alemany, Mission Hills, Calif.).

While the on-court exploits of social media sensation Zion Williamson and the off-court antics of Lavar Ball, the coach of the Big Baller Brand team which played in the event, got a majority of the attention, it was actually a fine Team Loaded team which won the 17U championship bracket.

Virginia-based Team Loaded defeated the New England Playaz, 54-52, in the title game after downing Compton Magic Elite (Calif.) in the semifinals, 80-59. The Playaz advanced to the title game courtesy of a 75-68 semifinal win over the Iowa Barnstormers.

In the championship game, Team Loaded had balanced scoring, with three players in double figures led by the 12 points apiece of Kiyon Boyd, a 6-foot-5 2018 small forward from H.D. Woodson (Fairfax, Va.), and Armando Bacot, a 6-foot-8 2019 power forward out of Trinity Episcopal (Richmond, VA.).

Christopher Doherty, a 6-foot-8 post out of Marlborough (Mass.), led the way for the Playaz with 14 points, eight rebounds and two blocks.

Team Loaded didn’t have many individual statistical leaders from the event, but played a good brand of team ball and got positive contributions from nearly every player on its roster throughout.

Individually, 2019 La’Melo Ball of Big Baller Brand led all scorers with 33.5 ppg. The popular point guard and youngest brother of Los Angeles Lakers rookie Lonzo Ball was also eleventh in rebounding with 10.8 per game and ninth in assists (5.5) while shooting 37 percent (40-108) from the field.