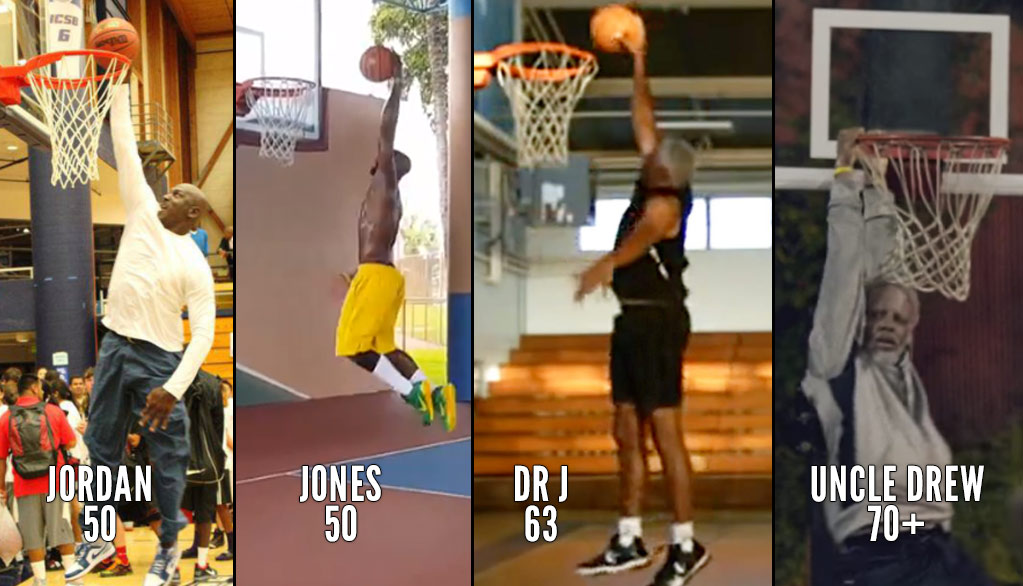 Shout out to Paul Jones. I know former NBA players in their early 40s that can’t dunk anymore. So to see a guy, standing at just ...(Read more)

Shout out to Paul Jones. I know former NBA players in their early 40s that can’t dunk anymore. So to see a guy, standing at just 6’3, dunking at the age of 50, is pretty damn impressive. Granted his dunk wasn’t anything “special” — like the dunks we are used to seeing by the guy who filmed this video, dunk legend Brandon “Werm” Lacue — but if we are going to get excited about seeing the greatest dunker of all-time, 6’6 40-year old Vince Carter, do a breakaway dunk or when the other greatest dunker of all-time, 6’6 Michael Jordan, dunks by a little kid at the age of 50…

Then we should give some props to Mr. Jones, who supposedly is basketball legend in the FT Lauderdale area.

Speaking of old guys dunking and legends, this give me an excuse to post about the legend of legends, Julius Erving aka Dr J, who threw down a dunk at the young age of 63 a few years ago.

The legendary Wilt Chamberlain died at the age of 63 but I’m pretty sure he was dunking the day before and working on #32,437 in another category. Just take a look at this crazy video of him at the age of 50!

If you are wondering who was the oldest player to ever dunk in a game. The unofficial record goes to the Chief, Robert Parish, for this 1997 buzzer-beating dunk during his 21st season in the NBA.

This post also gives me an excuse to shamelessly plug our annual Ballislife All-American game by mentioning the time Cliff Alexander’s 40-year old Dad threw down a 360 dunk — without stretching and on his first attempt — at our All-American game practice a few years back.

And of course, we can’t talk about old guys without bringing up our favorite uncle, Uncle Drew. If you have been wondering if they are ever going to make another one of these commercials, they are actually making a movie based off this character and it will star Kyrie Irving, Reggie Miller, Draymond Green and Shaq.