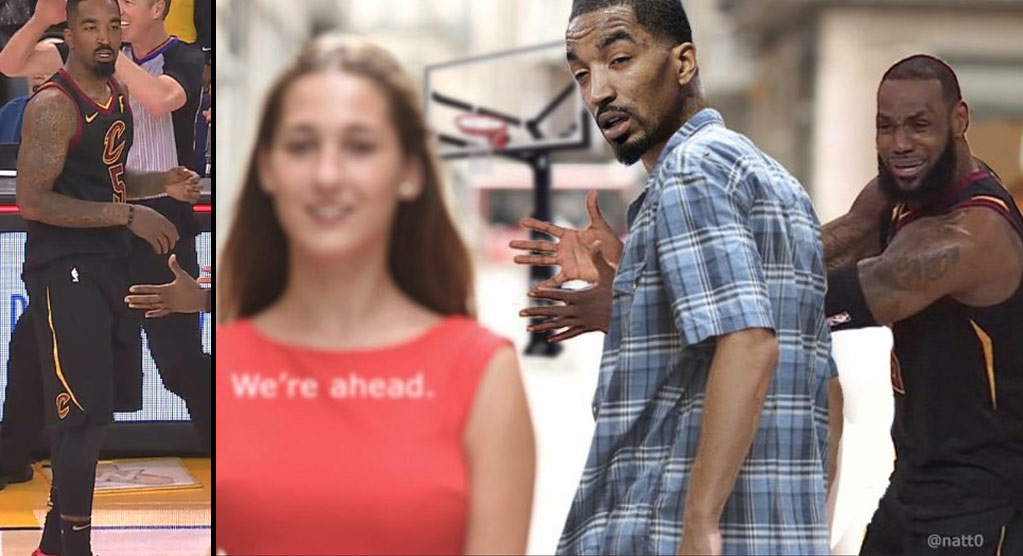 We never got a LeBron vs Kobe match-up in the NBA Finals but the Basketball Gods tried to make it up to us this year by ...(Read more)

We never got a LeBron vs Kobe match-up in the NBA Finals but the Basketball Gods tried to make it up to us this year by blessing us with a JR Smith vs Nick Young NBA Finals (thank you B/R for this great NBA Finals preview video).

In Game 1 of the 2018 NBA Finals, Swaggy P was a no-show. He played a quiet 10 minutes and scored just two points on 1-of-4 shooting. Smith did show up. HE SHOWED UP, fucked up and generated more noise than LeBron and his ridiculous stat line of 51 points, 8 rebounds and 8 assists with a nasty red eye (thanks Draymond).

Midway through the first quarter, Smith went for a steal and almost injured Klay Thompson.

Then in the final seconds of the second quarter, Smith went for another steal in almost the exact same spot, slips, and leaves Steph Curry wide-open for a buzzer-beating three that tied the game.

That was foreplay. Those were just teasers to the historic mental mistake he made in the final seconds of regulation: Game tied with 4.5 seconds left on the clock, Smith grabbed an offensive rebound off a missed free throw by George Hill, then dribbled out to the three-point line while LeBron was screaming at him and pointing in the opposite direction.

The games goes to overtime and the Cavs end up losing by 10.

After the game, Smith claimed he knew the game was tied.

“No, I knew we were tied,” Said Smith, who appeared to have said “I thought we were ahead” to LeBron during the game (17 second mark of the above video). “It’s just I thought we were going to take a timeout because I got the rebound. I’m pretty sure everybody didn’t think I was going to shoot it over KD right there. … I mean, I saw KD standing right next to me. He already had, what, four blocks? So I wasn’t trying to be the fifth.

“If I thought we were ahead then I would have just held onto the ball and let them foul me. So, clearly that wasn’t the case.”

Here’s Draymond Green’s reaction to Smith saying he knew the game was tied.

Draymond Green reacts to a reporter’s question about J.R. Smith at the end of regulation. #NBAFinals (via @TheAthleticSF) pic.twitter.com/jcfa9HGlDS

And here’s what a few NBA players and the ruthless people of the internet had to say about Smith, who also missed 7 of his 10 shot attempts and had a -22 +/1.

this moment is going down in nba history pic.twitter.com/0BoTKFzXU0

Jr is on that henny lol pic.twitter.com/0GBhgXjVyt

JR went for the Henny instead of the win ? pic.twitter.com/SfQkR7bFWo

When Lebron catches JR Smith after the game lmaoo pic.twitter.com/93sNrt9Ejo

LeBron can recall every single possession in a 48-minute game. JR doesn't even know the score.

when you drop 50 in a Finals game that will forever be known as that time JR Smith forgot the score pic.twitter.com/l7Lba5uTyR

JR Smith's legendary game will go down in history. pic.twitter.com/3VflgS8msv

Friend: How could JR not know the score?

Me: This is the guy who, during one game, forgot he was IN THE GAME.https://t.co/4guRMn5xUW

Javale McGee: Missing that wide open dunk has to be the dumbest highlight in NBA Finals history…

In the Jordan vs Lebron debate, here's one indisputable fact… Michael Jordan never had to play with JR Smith.

Okay, MJ > LeBron only because Jordan would’ve Goldberg speared JR Smith through the scorers table after that play

JR Smith talking to Lebron after the game. pic.twitter.com/c3cCNvYrWN

Dan Gilbert: who should we trade first?

Something for LeBron James to keep in mind: JR Smith will not be a member of the Houston Rockets next season.

The Getty photos of JR are here and they do not disappoint ? pic.twitter.com/0SNayk0g0V

Woke up to this in my text messages… pic.twitter.com/Vq4hK30R4u

"This will be remembered forever and ever as the JR Smith game."@RealSkipBayless reacts to Game 1 between the Cavs and Warriors pic.twitter.com/ldSFuaCCWC

WHAT WAS SMITH THINKING?