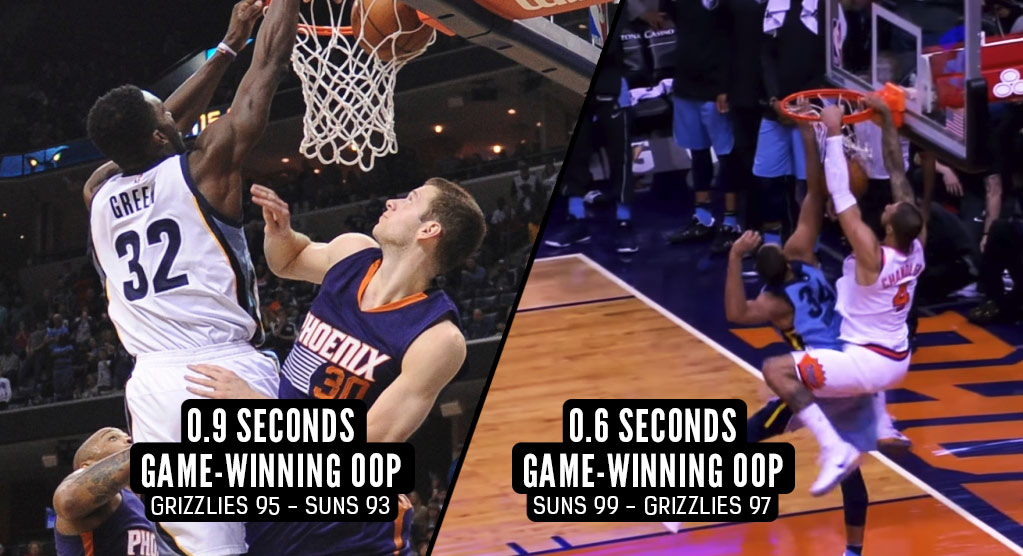 On Tuesday, the Phoenix Suns’ Tyson Chandler threw down a buzzer-beating-game-winning-posterizing-not-offensive-goaltending-alley-oop dunk vs the Grizzlies and then almost knocked out a few excited fans with his punch ...(Read more)

On Tuesday, the Phoenix Suns’ Tyson Chandler threw down a buzzer-beating-game-winning-posterizing-not-offensive-goaltending-alley-oop dunk vs the Grizzlies and then almost knocked out a few excited fans with his punch daps! The reason why the play wasn’t called for offensive goaltending is because that rule doesn’t apply when you are inbounding the ball. I bet you didn’t know that.

“I told our guy to shoot the ball in the basket and all Tyson has to do is touch it on the way down or grab the rim and have it hit your knuckle and go in,” Said Coach Jay Triano said about the final play.

Frustrated Grizzlies coach J.B. Bickerstaff had this to say about it: “It is what it is.”

Besides being a pretty awesome game-winner that produced some amusing photos that Brandon Wright isn’t going to want to look at, it was also a payback play.

Back in 2015, the two teams were tied at 93 with 0.8 seconds left in the game but the Grizzlies were the team inbounding and they were on their home court. Courtney Lee threw an inbound lob to Jeff Green, who dunked it in the same spot Chandler made his game-winning dunk with 0.6 seconds left.

And if you think Wright is going to hate being reminded of Chandler’s game-winner, here’s what happened to the Suns’ Jon Leur  in the final two minutes of the 2015 game: he misses his 8th shot out of 11 attempts, fouls Marc Gasol with a minute left, misses two free throws with 13 seconds left and then ended up on a poster as Jeff Green dunked in the game-winner at the buzzer.

If you want to see more game-winning dunks and/or the highlight of Ryan Kelly’s NBA career, then you should enjoy this compilation video.