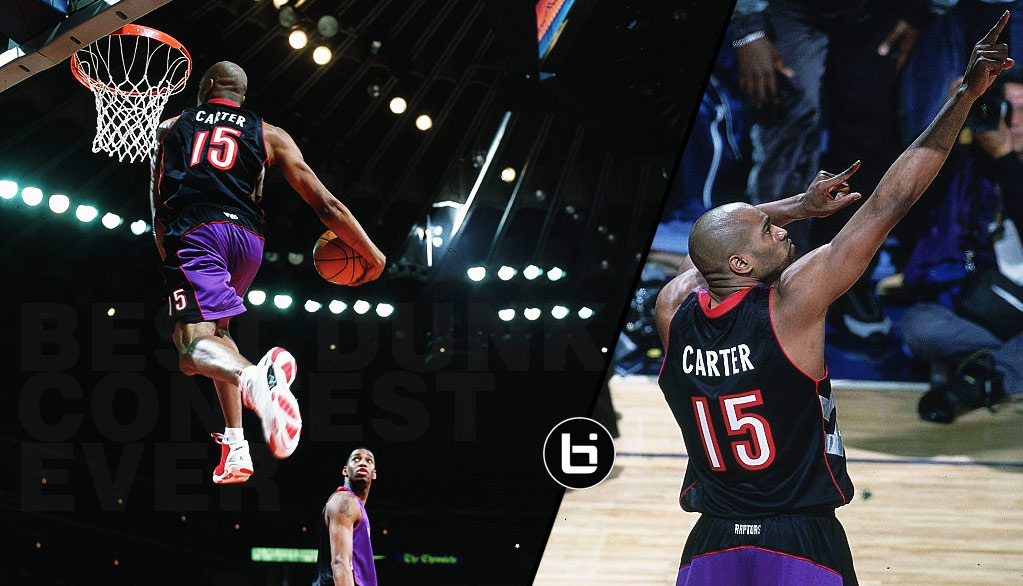 We all need to thank Kenny Smith! Not because he was the perfect compliment to Vince Carter’s epic dunks from the 2000 Dunk Contest, saying things ...(Read more)

Vince Carter Looks Back At The 2000 Slam Dunk Contest (Thank You Kenny Smith!)

We all need to thank Kenny Smith! Not because he was the perfect compliment to Vince Carter’s epic dunks from the 2000 Dunk Contest, saying things like, “Let’s go home,” “Can I take a time-out” and “It’s over,” but because he pressured Vince to say “Yes” to the dunk contest during an interview for TNT.

During the recording of a TNT interview in 1998, Vince told Smith he already told the NBA he wasn’t going to do it. A shocked Jet put the peer pressure on Vince and convinced him to agree to the resurrected dunk contest, which was dropped from All-Star weekend in 98 and didn’t happen in 99 because of the NBA lockout.

After agreeing to do the event, Vince then convinced his cousin, Tracy McGrady, to also do the dunk contest. Those two, along with Steve Francis and the voice of Kenny Smith, made the 2000 NBA Slam Dunk Contest the greatest dunk contest of all-time!

ESPN recently did a great piece on the GOAT event called The Oral History of the 2000 Dunk Contest. Here are a few great excerpts from it.

VINCE: I changed my routine in the layup line of the dunk contest.

VINCE: If you watch it on the second dribble (of his 1st dunk) I smacked the ball real hard and that’s when I felt like I powered up, you know, like Mario Bros. And I just felt like I gained two, three inches [when I jumped]. When I took off and turned around, the rim was right here [at eye level].

VINCE: They didn’t quite tell us about the partner thing, so we didn’t practice that at all. I didn’t know. So I was like, “What the heck could I do?” I had saw in a magazine — this is about the time the Strength Shoe was out — and there was a picture of this guy in the air and he had his hands between his legs, jumping up in the air. So I said, “OK, I’m gonna try it.” So I said to Tracy: “Just stand here and bounce it and get the hell out the way.” He said, “What are you gonna do?” I said, “Just bounce it and back up. About this high.” 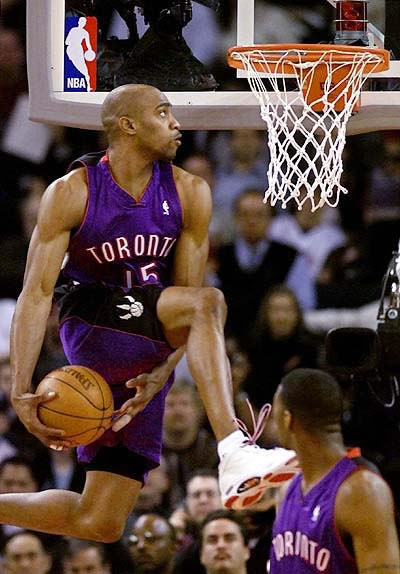 VINCE: So I walk it off, and if you notice right before I get to the rim, I say, “Dear God, please don’t let me fall off this rim.” And then I rubbed my arm ’cause I’m like, “OK, this is gonna hurt.”

ELTON BRAND: It was just like a pause, like, “OK, is that good?” And then, “Whoa, wait! His whole arm is in the rim? Woooooaaaahhhhhhhhh!”

VINCE: When I woke up that next morning, my whole right arm was black and blue.

IVERSON: Michael Jackson is my favorite artist of all time, and it was like the closest thing to a Michael Jackson concert to me on a basketball level. I don’t think a dunk contest will ever be duplicated in that fashion ever again.

VINCE LOOKS BACK AT THE CONTEST

DEEP REWIND OF THE CONTEST