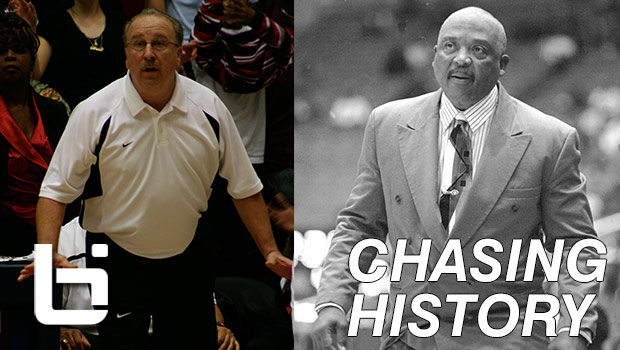 With Westchester (Los Angeles, Calif.) defeating Sheldon (Sacramento, Calif.), 56-52, longtime Comets coach Ed Azzam is one win away from becoming the L.A. City Section’s all-time coaching wins leader with 804 wins, which would give him one more than legendary Willie West of Crenshaw (Los Angeles, Calif.). With the win over Sheldon at the Tarkanian Classic, Azzam tied West with 803 wins and the Comets won the platinum division consolation championship in the process. The head man at Westchester since the 1979-80 season, Azzam has won six CIF state titles, 12 L.A. City Section titles and coached numerous NBA players. He has a wealth of knowledge and perspective and in this BIL exclusive, Azzam talks about his humble beginnings, his first title teams, some of his pros and offers blunt advice to young coaches.

The way Ed Azzam conducts himself, the Westchester coach is more happy his team won the Tarkanian Classic consolation title than any coaching milestone he’s reached. It’s just the way Azzam is.

But underneath the layer of seriousness and workmanlike demeanor is an honest coach and caring person who understands talent is the key ingredient of success in high school basketball. He’s learned it takes patience and being unafraid to discipline talented players to consistently win over a long period of time.

In stark contrast to Willie West, the retired coach from Crenshaw of Los Angeles whose CIF L.A. City Section record he tied and will surpass in the Comets’ next tournament after Christmas, Azzam didn’t win right away at Westchester. His first four seasons, his teams were 8-12, 4-14, 10-11 and 6-14. West won 48 of his first 49 games at Crenshaw!  Here are some other facts and notes Azzam talks about:

*He started to win when he attracted talent to his program. He did not win a league title in his first ten seasons and captured his first L.A. City Section title in his twelfth season in 1990-91. That team included Le’Roi O’Brien (Pepperdine), James “Gumby” Gray (Fresno St.) and twin brothers Lorenzo and LaValle Ball, the uncles of current Chino Hills standout Lonzo Ball. Westchester was decided underdogs in that first city title game versus Manual Arts (Los Angeles).

*Azzam had some talented players transfer out of his program in the 1990s. He’s honest and blunt about sometimes having players who didn’t buy in or didn’t trust his process of development. He had some extremely talented teams in the late 1980s and early 1990s (including the 1988-89 team that opened the season ranked No. 1 in California), but it didn’t all come together until 1997-98 when Westchester won its first of six CIF state titles. That team included current USC assistant coach and former Syracuse standout Tony Bland.

*Azzam’s 2002 and 2003 teams won state titles and were likely his most talented teams. His ’02 team included three future NBA players in Bobby Brown (Cal-St. Fullerton), Hassan Adams (Arizona) and Trevor Ariza (UCLA) and a host of other future D1 players. Azzam talks about the necessary freedoms coaches need to allow more talented players in order for them to thrive.

*In all, Azzam’s teams have won 12 L.A. City Section titles and six CIF state D1 titles (’98, ’02, ’02, ’05, ’09, ’10). West and Azzam are a combined 14-0 in state title games. Azzam bluntly states West would blow your team out if you weren’t prepared. Crenshaw was the class of the L.A. City Section and the state for many years and being in the same league as Crenshaw in his early years, it fueled Azzam’s competitive desire.

For more detailed Azzam and West records, including year-by-year won-loss records, check out this story from CalHiSports.com.