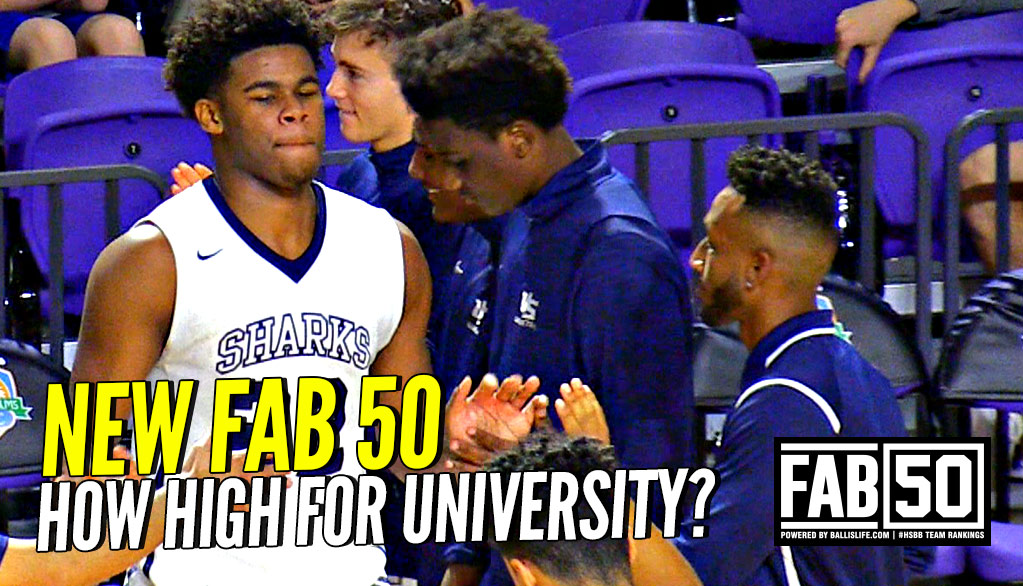 We ring in the New Year with our third edition of the FAB 50 National Team Rankings powered by Ballislife.com for the 2017-18 season. Ten teams celebrate ...(Read more)

We ring in the New Year with our third edition of the FAB 50 National Team Rankings powered by Ballislife.com for the 2017-18 season. Ten teams celebrate 2018 with an appearance in the rankings, led by top newcomer No. 27 Upson-Lee (Thomaston, Ga.). The myriad of results from the top holiday tournaments left plenty of games to analyze and some big questions to answer. The big New Year’s question was the debate as to which team was deserving of the No. 2 spot behind season-long No. 1 Montverde Academy of Florida, University School of Florida or Oak Hill Academy of Virginia. We break down why we went with Oak Hill and what’s in store in the coming weeks.

We have to admit, some of the tournament results we studied and analyzed as the country celebrated the New Year were a bit perplexing. Many elite teams were not consistent or fell flat in their opening game of a big tournament or showcase. Big-time high school basketball teams have to travel and play tough games on the road and the telling sign of a great team is to be able to stay focused and record big wins in adverse conditions.

With that it mind, Montverde Academy (Montverde, Fla.) rolled to tournament titles at the Iolani Classic in Hawaii and the Beach Ball Classic in Myrtle Beach, S.C. to remain unbeaten and retain the No. 1 ranking its held in the FAB 50 National Team Rankings powered by Ballislife.com since the preseason. The Eagles have steamrolled some quality teams, as evidenced by their final two wins in South Carolina. Fast-rising DeMatha Catholic (Hyattsville, Md.) shot over 50 percent from 3-point range and Kevin Boyle’s club still won 76-66 in the semifinals before taking apart a pretty good Long Island Lutheran (Glen Head, N.Y.) team (70-42) that came into the championship game ranked No. 25. There is a long way to go and plenty of landmines coming up, but should this club re-gain some of the depth it has lost to nagging injuries, this team could very well challenge the 2012-13 edition as Boyle’s finest Montverde Academy team.

The major question after all the tournament results came in was who deserved to move up to No. 2 after previous No. 2 Memphis East (Memphis Tenn.) fell in the title game of the City of Palms Classic in Ft. Myers, Fla., 77-72, to previous No. 11 University School (Ft. Lauderdale, Fla.). The Sharks became the lowest seed (No. 10) ever to win the prestigious tournament, as they beat previous No. 4 McEachern (Powder Springs, Ga.) 71-63 in the semifinals. After Christmas, University School kept up the positive momentum by capturing the eight-team T.J. Warren bracket of the John Wall Holiday Invitational in Raleigh, N.C., to enter 2018 with a 14-0 record.

Was Oak Hill Academy (Mouth of Wilson, Va.), which entered the New Year also unbeaten at 21-0, or the Sharks more deserving of the No. 2 spot? After some deliberation, we decided on Oak Hill Academy for three clear reasons.

First, Oak Hill Academy came in the higher ranked club and had a terrific 73-71 win over previous No. 14 IMG Academy (Bradenton, Fla.) in the title game of the Chick-Fil-A Classic in South Carolina when that club still had the services of All-American candidate Silvio De Sousa, who reclassified to enroll early at Kansas at the semester break following the event. Secondly, University School defeated five-loss Wesleyan Christian Academy (High Point, N.C.) by one point (65-64) and one of WCA’s losses is to an unranked club. Lastly, is the common opponent factor. The Sharks were forced into double-overtime in the quarterfinals of the City of Palms by Mater Dei (Santa Ana, Calif.) before it prevailed 81-72, whereas Oak Hill Academy controlled the Les Schwab Invitational title game with the Monarchs after the first quarter and won in regulation, 67-55. WCA also defeated Mater Dei in regulation, 82-73.

We admit we were real tempted to hop University School in front of the Warriors, but ultimately decided those factors were too succinct to keep the Warriors in the same rankings position they came into the holiday season with. What’s great about the debate is the two teams will play on MLK Monday at the Hoophall Classic in Springfield, Mass. and University School would be under added pressure to win that game should Oak Hill Academy not come out of the loaded Bass Pro Invitational (Springfield, Mo.) the Saturday prior with a tourney title in tow.

As for IMG, it lost 76-60 in the in John Wall Invitational semifinal to the the Hillcrest Prep (Phoenix, Ariz.) team University School easily downed in the final without the services of De Sousa. As coach Sean McAloon pointed out, his team hasn’t practiced yet with is new lineup and because of that IMG Academy remains in the FAB 50 until we see how the club re-groups. IMG checks in this week at No. 41.

This weekend’s Cancer Research Classic in Wheeling, West Virginia (Jan. 5 and 6) will be key for many teams looking to make a move in the FAB 50 and/or keep alive mythical national title dreams.

No. 12 La Lumiere (LaPorte, Ind.) faces both No. 11 Imhotep Charter (Philadelphia, Pa.) and top-ranked Montverde Academy. Imhotep has only lost to DeMatha Catholic, which will face one-loss McEachern in an excellent No. 5 vs. No. 6 FAB 50 matchup. No. 10 Gonzaga (Washington, D.C.) will look to keep pace with DeMatha in the rankings when it takes on battle-tested Mater Dei.

Gonzaga will face No. 13 Paul VI (Fairfax, Va.) and DeMatha in the first round of Washington Catholic Athletic Conference play on January 9 and 11, respectively.