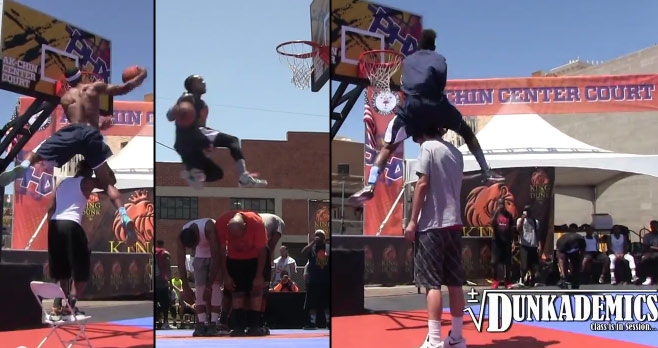 It was dunk heaven at the Phoenix 3on3 event this past weekend as dunk legend Kenny Dobbs hosted the “King of the Dunk Game” dunk contest ...(Read more)

It was dunk heaven at the Phoenix 3on3 event this past weekend as dunk legend Kenny Dobbs hosted the “King of the Dunk Game” dunk contest along with former NBA slam dunk contest winner Isaiah “JR” Rider.

Despite some pretty insane dunks, including Myree windmilling over a guy on a chair and 5’10 Issac jumping over a 7 footer,  it would be 1 footer Werm who beat out the 4x Houston Rockets Blacktop Winner Sir Issac in the finals for the title.

Both Issac and Reemix will be throwing down some crazy dunks during the weekend of May 2nd when we host the 2015 Ballislife All-American Game in Long Beach. If you can’t make it out, the game and festivities will be televised.

Also in May, Issac will be defending his Blacktop title in Houston – the event was originally scheduled for this month but was rained out.