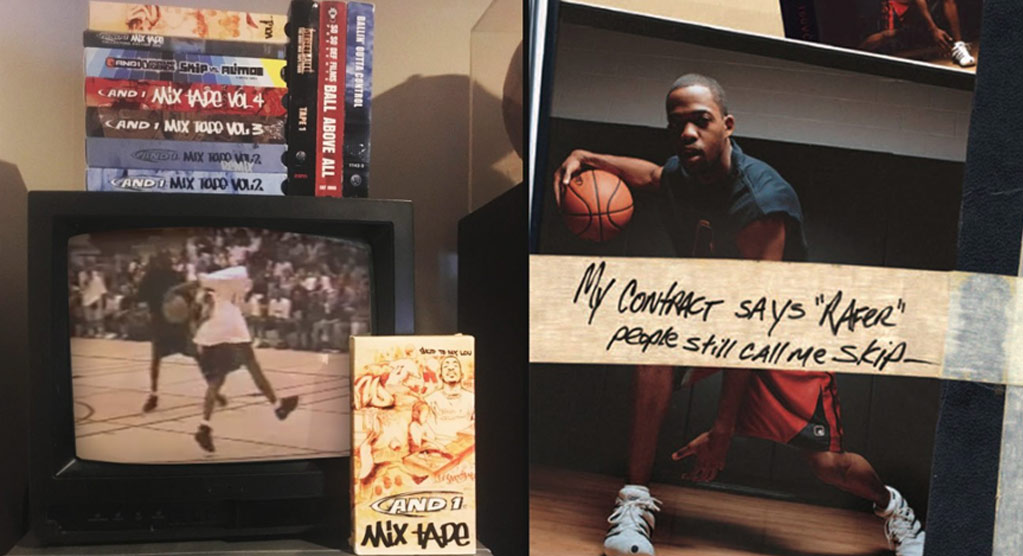 Rafer Jamel Alston was born in 1976 but 1999 was the year And1 introduced us to Skip to My Lou. The birth happened in the opening ...(Read more)

Rafer Jamel Alston was born in 1976 but 1999 was the year And1 introduced us to Skip to My Lou. The birth happened in the opening minutes of the And1 Mixtape Vol.1 VHS tape aka “The Skip Tape.”

These VHS mixtapes, that combined grainy EP quality footage with hot hip-hop tracks from the late 90s, were produced by the up-and-coming brand and sent to basketball camps, clinics, records labels and influential people in the hoop world as a promotional gift. After an overwhelmingly positive response from the recipients — including NBA players like Darrel Armstrong, Larry Hughes and Raef LaFrentz(!) — And1 decided to make a second print run much larger than the initial 50,000.

And1 took their massive next run of mixtapes to FootAction stores to give away for free! Free with the purchase of anything in the store — Jordans, Adidas, Reebok, Fila, a starter hat, whatever. After 200,000 whatevers were sold in a span of three weeks, the first volume of the And1 Mixtapes became a sought after treasure in the basketball community and its teenage streetball star, Rafer Alston (who was playing college ball during the release of the tape) from Jamaica, Queens, became a cult hero.

Hoop fanatics, like me, were searching eBay and chat rooms on a daily basis waiting for someone to post a bootleg of the free promo item to sell. I’ve even heard rumors of kids in schools and bootleggers on street corners selling copies of the tape. I was lucky enough to get my hands on one of those bootlegs and a legit copy about 10 years later (and six more since).

Although all six of the tracks on the 18-minute masterpiece were good, it was the first three minutes of Skip to My Lou embarrassing defenders to the sounds of Common and Sadat X that turned me (and many others) into a streetball fiend that needed multiple doses of the tape on a daily basis and had me impatiently waiting for another volume (the follow-up and it’s remix were disappointing).

After a couple of years of playing ball at community colleges and a year at Fresno State, Skip was drafted by the Milwaukee Bucks in the 2nd round of the 1999 NBA draft. He rode the bench for years and bounced around a couple of times until landing and blossoming in Miami in 2003. By this time, the And1 Mixtapes were more popular than any retail videos the NBA was putting out and streetball went from the streets to the mainstream as the ESPN Streetball show became the network’s highest-rated original program ever. Major companies like Mountain Dew poured in millions to sponsor the Mixtape Tour, which discovered and showcased the best streetballers in the US, like Hot Sauce, The Professor, and Air Up There.

Despite all of the jaw-dropping and ankle-breaking highlights generated by those names and players (from streetball to the NBA) that were inspired by their highlights, the first three minutes of the original 1999 And1 Mixtape remains the best three minutes in the history of not only those analog mixtapes, but arguably all mixtapes — and that includes everything we digitally do.

Damn! All this talking about “the best point guard in the world (you’ve never heard of)” has me feeling nostalgic. I think I’m going to pop my VHS copy into my 4-head Hi-Fi VCR that I paid $300 for back in 1997. Tags: and1, rafer, rafer alston, skip to my lou