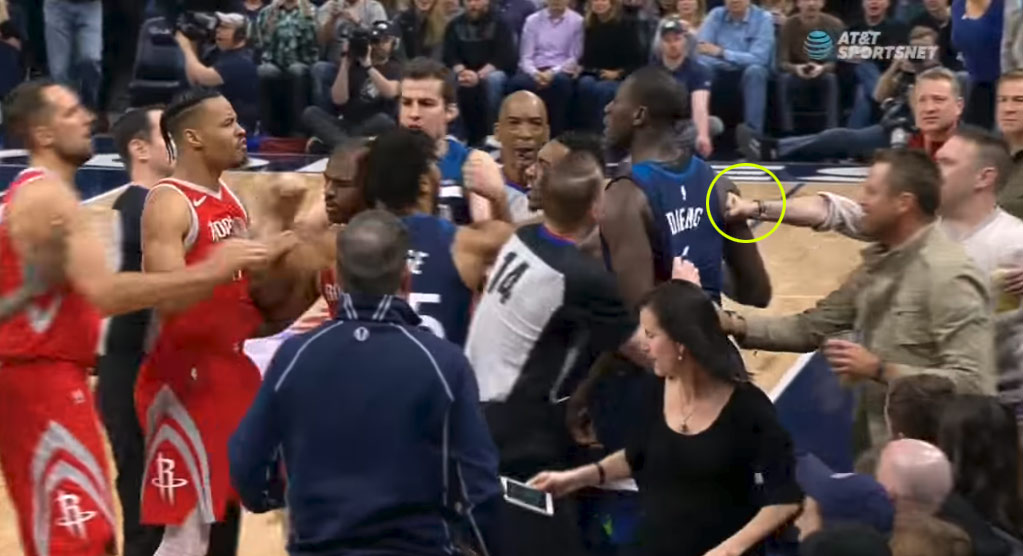 With about 10 minutes left in the Rockets win (26th out of last 28 games) on Sunday, the Wolves’ Gorgui Dieng “pushed” (a flopping) Chris Paul ...(Read more)

With about 10 minutes left in the Rockets win (26th out of last 28 games) on Sunday, the Wolves’ Gorgui Dieng “pushed” (a flopping) Chris Paul after a foul call. A frustrated Gerald Green — fresh off of missing two free throws — saw his point guard drop to the ground and roll on his back so he showed Dieng what a real shove looks like. Dieng landed in the expensive seats bought by some really hyped up fans; one fan was so hype (or drunk) he even gave Dieng a love tap on the back that probably would have knocked down CP3.

The refs hit Dieng with a tech and gave Green the boot, which usually comes with a $2,000 fine from the NBA.

“I’m just trying to be there for my teammate,” Said Green, who was reportedly one of the players that went with CP3 through the “secret tunnel’ to the Clippers’ locker room earlier in the season. “I saw something happen and I reacted. I paid the consequences for it. I learned my lesson, got ejected, try not to do that again, and hopefully we’re going to move forward from this.”

Speaking of little guys getting into it with Dieng, remember this amusing David and Goliath moment?