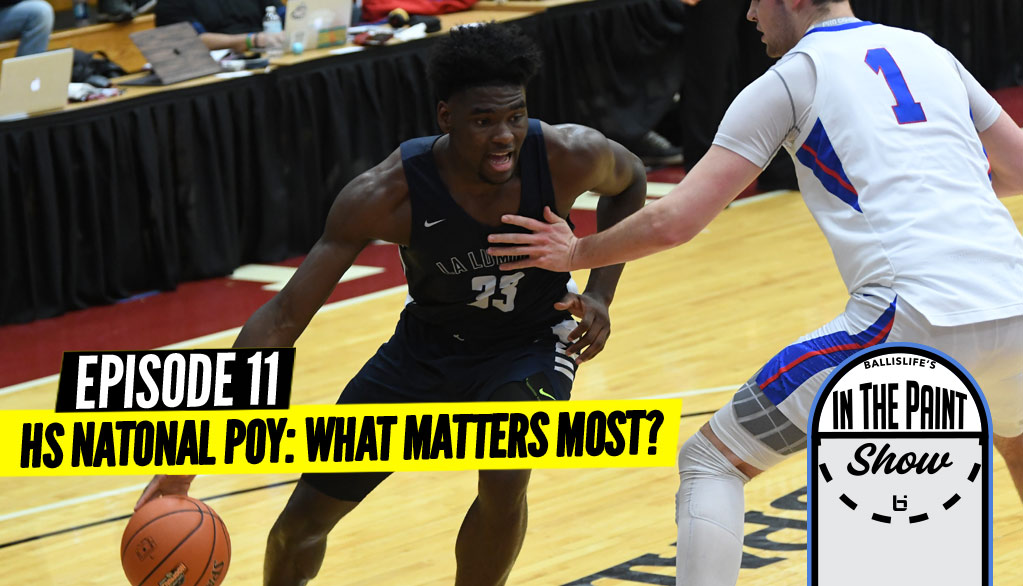 In episode No. 11 of our "In The Paint Show," Ron and Devin go in on the NBA All-Star Game format and talk about the leading candidates for high school national player of the year? Does the Mr. Basketball USA honoree have to have big time stats? Play for a highly-rated FAB 50 team? Or should his NBA potential be the bigger factor?

Do STATS and WINNING Matter for Elites? Podcast Goes HARD!

In the eleventh episode of our all-new “In The Paint Show,“ hosts Ronnie Flores and Devin Ugland give their take on the NBA All-Star Game and the event format changes, break down the top candidates for Mr. Basketball USA, which honors the national player of the year at season’s end and predict and preview the CIF Southern Section Open Division title game set for February 23.

The NBA has now done away with a East vs. West format, has gone to drafting two teams and has four participants in its dunk contest. The fellas talk about if these format changes are good for the NBA and its fans and if the league’s marquee players not appearing in the dunk contest has hurt the event.

Ron and Dev go Hard in the Paint on Ballislife’s National Player of the Year Award, Mr. Basketball USA. The end-of-season honor began in 1996 and is retroactive back to when Wilt Chamberlain was kicking ass at Overbook High School in Philadelphia. All but two of the all-timer winners eventually played in the NBA. Should this prestigious honor be just about who is the best talent? Should it be more reflective of who is the top prospect for college and the NBA? Or should it be about which elite player has the best season statistics on a winning team, regardless of what kind of prospect he is?

The fellas give their inside take and talk about the selection process, what they learned about the game from past winners, such as Mike Bibby being selected over Kobe Bryant in 1996, and the ridiculousness of Skal Labissière being the top prospect in some mainstream national player rankings even though Ben Simmons was the first unanimous vote-getter in the Mr. Basketball USA Tracker and a cinch Mr. Basketball USA honoree back in 2015.

Dev and Ron also update the CIF Southern Section playoffs and give their predictions on which two teams will make it out of pool play to earn the right to play for the section title. The guys also talk about if the pool play format has been good for SoCal high school basketball and why the CIF needs unbeaten and FAB 50 No. 8 Salesian (Richmond, Calif.) to represent NorCal in the CIF Open state championship game March 9.

The fellas hit on high school, college recruiting and the NBA this week, so make sure to give our Pod a listen below and share it with friends!