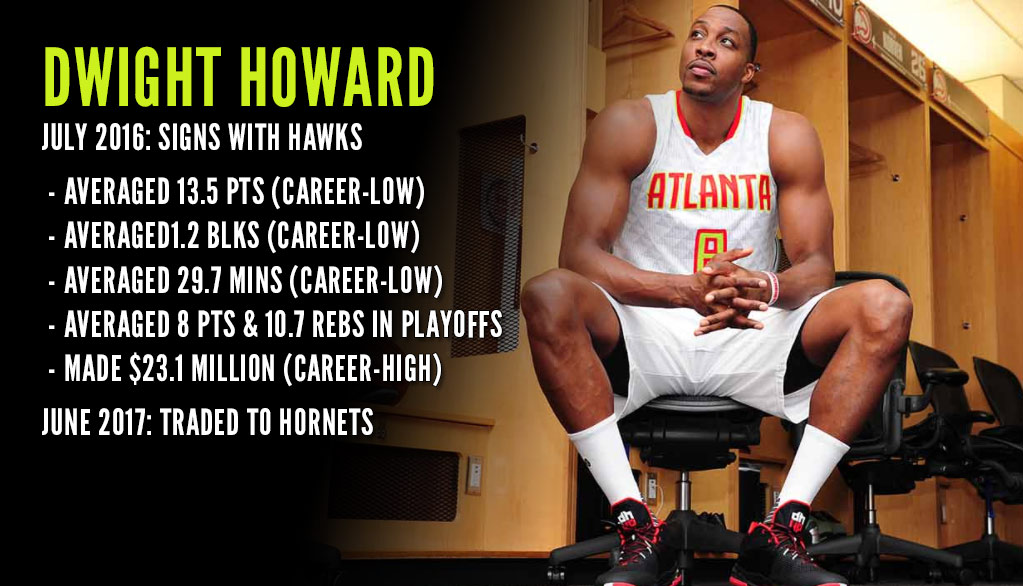 It wasn’t that long ago when I was posting daily highlights and fantasy-busting stats of Dwight Howard, calling the 8x All-Star and 5x All-NBA First Teamer the ...(Read more)

It wasn’t that long ago when I was posting daily highlights and fantasy-busting stats of Dwight Howard, calling the 8x All-Star and 5x All-NBA First Teamer the best big man in the league and saying it’s only a matter of time until he wins a ring, earns the right to call himself Superman like Shaq — the original #1 draft pick center of the Orlando Magic — and goes to the Hall of Fame. Then came the nasty divorce from Orlando. Then came the awful Nash/Kobe/Dwight experiment in LA. Then came the disappointing run in Houston. Then he went back to his hometown in Atlanta and all signs pointed to a season of redemption. Less than a year later after the Hawks were posting “Welcome Back Dwight” images on Hawks’ advertisements, he, along with the 31st pick in the upcoming draft was traded to the Hornets for Miles Plumlee, Marco Belinelli and the 41st pick.

If the news of being traded for Mason Plumlee’s brother, who played just 13 games last season averaging 2.4 points and 3.2 boards, and Big Balls Belinelli wasn’t insulting enough, he was traded just minutes after he went on Twitter, asking fans to give him their thoughts on trades and “remember 2B-Nice.” The internet being the savage place that it is, wasn’t so nice. 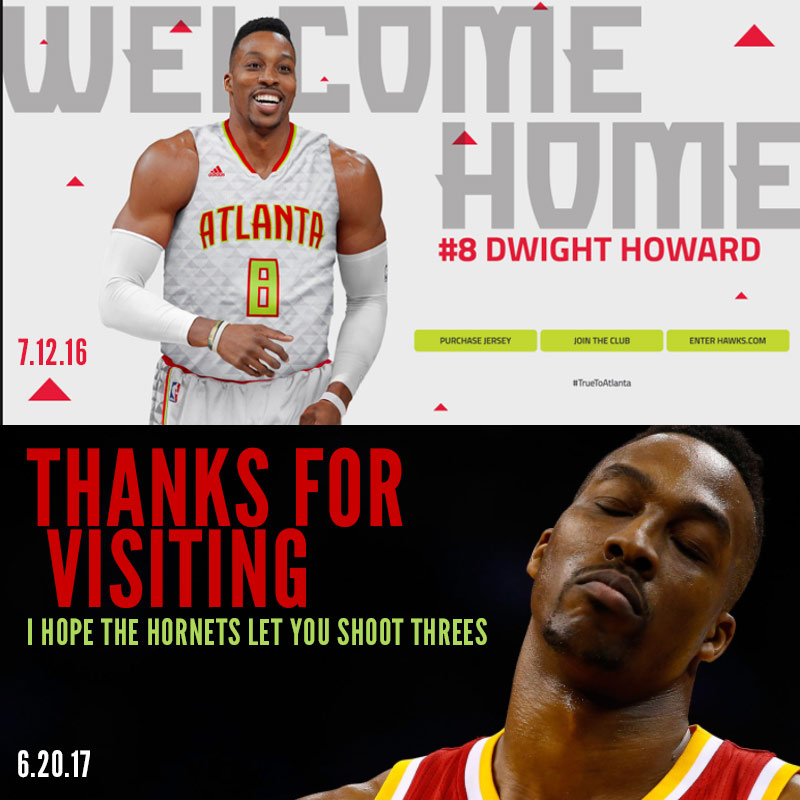 During his hometown visit, he averaged a career-low 13.5 points with a career-low 1.2 blocks to go with 12.7 boards, while playing a career-low 29.7 minutes a game. Those numbers dropped to eight points and 10.7 boards in the playoffs, where he complained about not getting enough minutes and having to sit out multiple fourth quarters against the Wizards. But don’t feel too bad for him because he made a career-high $23.2 million this season and is owed even more ($23.5 million) next season. He will also be playing for Coach Steve Clifford, who was an assistant coach of the Orlando Magic during Dwight’s Superman years. So maybe next season will actually be Dwight’s “redemption season.”

In the meantime, let’s look back at 10 not-so-great moments from Dwight during his disappointing return to Atlanta.

NO EFFORT ON D

In defense (no pun intended) of the 3 x Defensive Player of the Year, he had five fouls and was more concerned about boxing out Gortat.  With that said, old Dwight would have challenged Oubre.

Speaking of “bad D,” this postgame interview with Sam Dekker’s girlfriend about “good D” might be my favorite moment from his time with the Hawks.

DUNKED ON BY PORZINGIS

This wasn’t the first time and probably won’t be the last time Dwight was dunked on by the unicorn that is Kristaps Porzingis, who also might be calling a new city home in a few weeks.

You knew the President of the Dwight Howard Hate Club was going to feature this clip of Howard making a bad pass and then looking at his teammate like he did something wrong on Shaqtin’ a Fool.

CHALLENGES LAKERS FAN TO A FIGHT

You would think Dwight Howard would be able to just ignore hecklers, especially in LA, by now.  After a loss to the Lakers, Howard challenged a heckling fan to “come back here and say it” after being called a “b****h.”  Security pushed Howard into the tunnel as the fans continued to laugh and tease Howard.

After getting ejected for elbowing Cody Zeller in the face with five minutes left in regulation, the Hornets scored nine consecutive points and pulled out a 100-96 victory. After the game, Dwight said, “my job is to protect my house — at all costs. I am making no apologies for it.”

After being dominated by Marcin Gortat and having to sit out two fourth quarters in their six-game series against the Wizards, a pissed off Howard had this to say about his role with the Hawks.

Howard is not happy. The day after the Hawks were drop-kicked into the offseason by Washington, he used the word “pissed” three times to describe his feelings about the way both his and the team’s the season ended.

NO DOUBT, I’M A HALL OF FAMER

During an interview with The Undefeated, Dwight Howard said, “No doubt” when asked if he thought he belonged in the hall of fame.

“No doubt. It’s kind of got swept under the rug because the perception of all the things that happened in Orlando. All of the media stuff,” Howard said. “If you look at basketball itself, and I don’t ever talk about myself, but winning three Defensive Player of the Year trophies has never been done. Leading the league in rebounding six straight years. All that kind of stuff, I think that deserves it.”

This led to a pretty great reaction from Richard Jefferson on ESPN’s The Jump.

I WANT TO SHOOT THREES

Two weeks before Tuesday’s trade, Howard went on ESPN’s The Jump and talked about adding the three-point shot to his offensive arsenal.

“I’ve been working on my 3’s, really trying to add some range to my game,” said Howard, who went 0 for 2 from three last season and is 5 for 56 over the first 13 seasons of his NBA career. “Which is going to be weird for people to see, I guess. They are used to seeing me in the paint battling. But in order for me to play longer, I have to expand my game. The game is not just back to the basket, get the ball in the post and go to work. It’s more stepping away from the basket, setting screens, popping, shooting 3’s and stuff like that. People haven’t seen me do that. It’s going to be an adjustment for me, but also the fans. I think it’s going to be fun.”