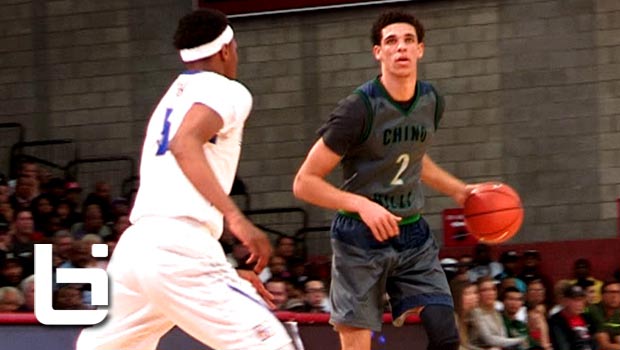 Chino Hills of California captures the FAB 50 national crown presented by Ballislife.com by winning 35 games without a loss and defeating 11 programs who were ranked ...(Read more)

Chino Hills of California captures the FAB 50 national crown presented by Ballislife.com by winning 35 games without a loss and defeating 11 programs who were ranked in the FAB 50 this season en route to the CIF Open Division state title to edge Oak Hill Academy of Virginia. Oak Hill Academy, which does not compete for a state title, closed out its season by winning the Dick’s Nationals tournament in New York. Read on for an explanation of Chino Hills-Oak Hill Academy decision and check back at the end of the week for expanded FAB 50 rankings with write-ups for all 50 teams.

Chino Hills defeated No. 2 and three-time defending FAB 50 national champion Montverde Academy (Montverde, Fla.) 83-82 in the quarterfinals of the City of Palms Tournament in Ft. Myers, Fla., so the head-to-head factor eliminated the Eagles from the race. California Interscholastic Federation member schools are not allowed to compete at Dick’s Nationals.

In New York, top-seeded Montverde Academy fell to FAB 50 No. 9 La Lumiere (LaPorte, Ind.) 55-47 in the semifinals to set up a Saturday championship showdown at Madison Square Garden with Oak Hill Academy, which advanced to the title game via victories over FAB 50 No. 28 Miller Grove (Lithonia, Ga.) in the semifinals (47-46) and No. 25 Wasatch Academy (Mount Pleasant, Utah) in the quarterfinals (81-64). Since the event began at the conclusion of the 2009 season, Oak Hill Academy has been snakebite at the event, losing in the final four times, including the past two seasons to Montverde Academy.

It looked like Oak Hill Academy was going to cruise to its first-ever Dick’s Nationals title, as the Warriors led by 18 points midway through the third period. Oak Hill, however, allowed La Lumiere to crawl back in the game despite the Lakers losing 6-foot-11 junior forward Jeremiah Tilmon to a dislocated shoulder early in the contest. The Lakers took a 52-50 lead in regulation before Braxton Key of Oak Hill was able to tie the game on two made free throws with 6.6 seconds remaining. La Lumiere, which defeated No. 7 St. Benedict’s (Newark, N.J.) 60-59 in the quarterfinals to avenge an earlier loss to the Gray Bees, didn’t get the field goal look it wanted from leading scorer Brian “Tugs” Bowen in the closing seconds.

In overtime, La Lumiere led by as many as three points with possession, but Oak Hill tied the game on a conventional 3-point play by Lindell Wigginton with 35.2 seconds remaining. After that sequence, there was a five-second differential between the 30-second shot clock and the game clock, and La Lumiere’s field goal attempt allowed Oak Hill’s Matt Coleman to race up the court for the potential game-winning 3-point field goal. His shot was off, but Virginia Tech-bound big man Khadim Sy tipped in the carom at the buzzer to give the Warriors the tourney title and a 45-1 final record.

With Oak Hill Academy getting the win and finishing its season 45-1, its resume had to be weighted against that of Chino Hills, which did not taste defeat in 35 outings. Oak Hill Academy defeated 13 programs that were ranked in the FAB 50 at some point during the season, including three teams in New York.

Chino Hills defeated 11 programs that were ranked at some point and actually beat three of those teams — No. 36 Bishop Montgomery (Torrance, Calif.), No. 38 Foothills Christian (El Cajon, Calif.), No. 43 High Point Christian (High Point, N.C.) — more than once. In its much anticipated first meeting with Bishop Montgomery  (ranked No. 7 at the time), the Knights actually had a late lead on the Huskies before allowing it to slip away, as Chino Hills recorded a 71-67 win. In the rematch in the SoCal Open Division regional finals, Chino Hills dominated even more than the 84-62 score indicates, as the Huskies won their eight playoff games against the toughest competition in the nation’s largest and most populous state by an average of 29 points.

Oak Hill’s lone loss came against 22-foot Academy (Greenville, S.C.) in November. Because that program includes post-graduates on its roster, the result of that 70-67 loss had to be scrutinized even deeper. Oak Hill and other academy-type programs built for national schedules regularly play and defeat teams with players who have exhausted their regular high school eligibility. There are advantages for academy-type programs over traditional high schools and having to defeat post-grad teams is one of the challenges it deals with.

We had a chance to evaluate 22-foot Academy (Greenville, S.C.) at the Tarkanian Classic in December and while talented, it’s not a team a program gunning for a mythical national crown can ill-afford to lose to when compared against a unbeaten team with multiple wins over other FAB 50-ranked teams from a traditional power state (in this case California). 22-foot Academy lost to unranked programs Evelyn Mack Academy (Charlotte, N.C.) and Arlington Country Day (Jacksonville, Fla.) and to regionally-ranked Sunrise Christian Academy (Bel Aire, Kan.) and Victory Rock Prep (Sarasota, Fla.).

Oak Hill led La Lumiere by 18 points in the third quarter and, ironically, also led 22-foot Academy by the same margin before losing. Oak Hill was able to pull out the win over La Lumiere to make its argument in the race for No. 1 compelling, but not enough to knock Chino Hills from the rankings position it held since the turn of the calendar year.

While Chino Hills, which started the season No. 11 in the FAB 50, seemed to have plenty of rankings factors go its way during the course of the season, Oak Hill dealt with adversity most of the season. Harry Giles, the Duke bound recruit who likely would have challenged Chino Hills’ Lonzo Ball and Josh Jackson of Prolific Prep (Napa, Calif.) for Mr. Basketball USA honors, was lost for the season early in Oak Hill’s first game. Considering Oak Hill went 45-1 without him, it was a remarkable season for the preseason No. 1 ranked team. Oak Hill also played plenty of games without Penn State-bound forward Joe Hampton, whereas Chino Hills basically played five players and didn’t run into significant injuries or fouls outs during key games.

One coach whose team participated at Dick’s Nationals said Chino Hills should be No. 1 — and said that before the conclusion of the event. It was a remarkable season for California’s first FAB 50 No. 1 club since Dominguez (Compton, Calif.) in 1999-00. Chino Hills averaged 98.5 points per game and dominated California’s top teams behind the play of the UCLA-bound Ball, California’s all-time assist king who is scheduled to play in the 6th Annual Ballislife All-American Game April 30. The 35 victories ties the state record for most wins in a season by an unbeaten club, according to Cal-Hi Sports. That was first accomplished in 2013-14 when Mater Dei (Santa Ana, Calif.) went 35-0 and finished No. 2 in the FAB 50 behind one-loss Montverde Academy. Chino Hills’ victory over the three-time defending champions was a key turning point in the Huskies believing a national crown was a real possibility.