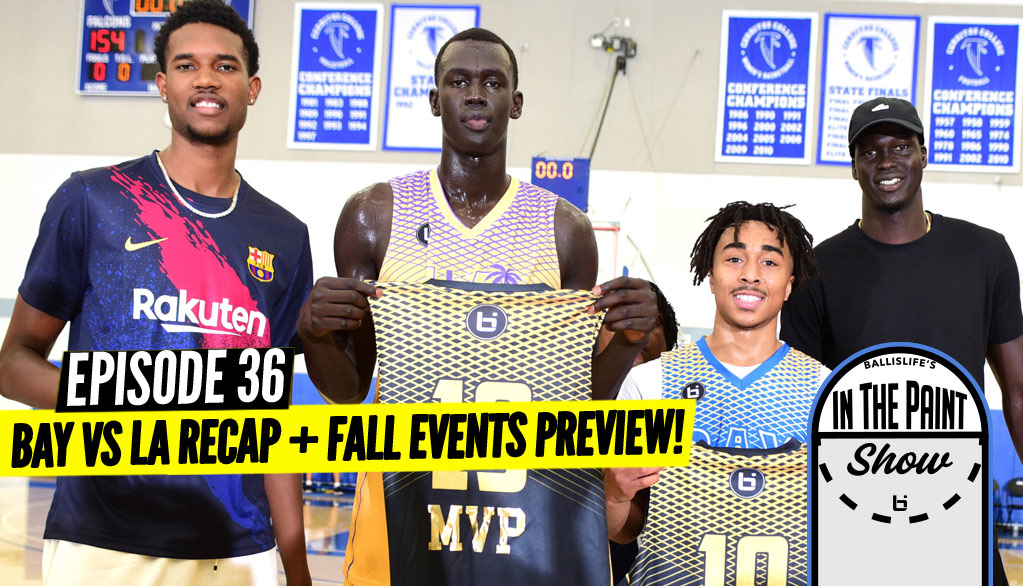 In episode No. 36 of our  "In The Paint Show,"  Ron and Dev go hard on the Bay vs. LA Showcase game in which Makur Maker and Keith Dinwiddie led Team LA to a dominant win over Team Bay. They also preview upcoming Fall League and showcase camps they will be attending, including the Hoops By Ugland Fall High School Showcase.

“In The Paint” Podcast GOES IN On Bay vs. LA!

In episode No. 36 of our  “In The Paint Show,“  co-hosts Devin Ugland and Ronnie Flores go hard on the Bay vs. LA Showcase game which took place over the weekend at Cerritos College. What was the purpose? What happened? Who stood out? What lesser known players surprised the assorted media in attendance? Ron and Dev also preview upcoming Fall League and showcase camps they will attend, including the Hoops By Ugland Fall High School Showcase taking place at Colony (Ontario, Calif.).

In the second annual Bay vs. LA Showcase Basketball Game presented by Ballislife, the Northern California-based Team Bay was extremely motivated to erase the memory of last year’s 122-116 loss to Southern California-based Team LA at Kezar Pavilion in Golden Gate Park. Team Bay knew it couldn’t afford to get behind early as it did in 2018, especially with the game being played in SoCal at Cerritos College.

Team Bay started off well and held an early lead, but were hurt when 2020 shooting guard Keith Dinwiddie (Fairfax, Los Angeles) had 15 points in his five minute line shift late in the first quarter. Inside, Team Bay simply had no answer for 6-foot-11 2020 Makur Maker (Pacific Academy, Irvine, Calif.), who dominated the boards and finished with 32 points, 14 rebounds and four assists in Team LA’s dominating 158-124 victory before approximately 1,000 fans.

Team Bay stayed close for the first half behind the play of 2021 point guard Isa Silva (Jesuit, Carmichael, Calif.) and trailed 72-59 at halftime despite Dinwiddie’s 15 points. In the first line shift of the second half, Maker took over with an array of long range bombs and drives to the basket as Team LA broke the game open. Team LA out-rebounded Team Bay, 72-25, a difference inflated by the low outside shooting percentage of the NorCal based club.

Maker took him MVP honors for Team LA, while 2021 guard Frankie Collins (Compass Prep, Phoenix, Ariz.) was named MVP for Team Bay following his 27-point, four-rebound, two-assist, two-steal effort. The MVP jerseys were presented by 2018 Team LA MVP Evan Mobley, the nation’s No. 1 recruit who was unable to play this year as a precaution for a nagging back injury.