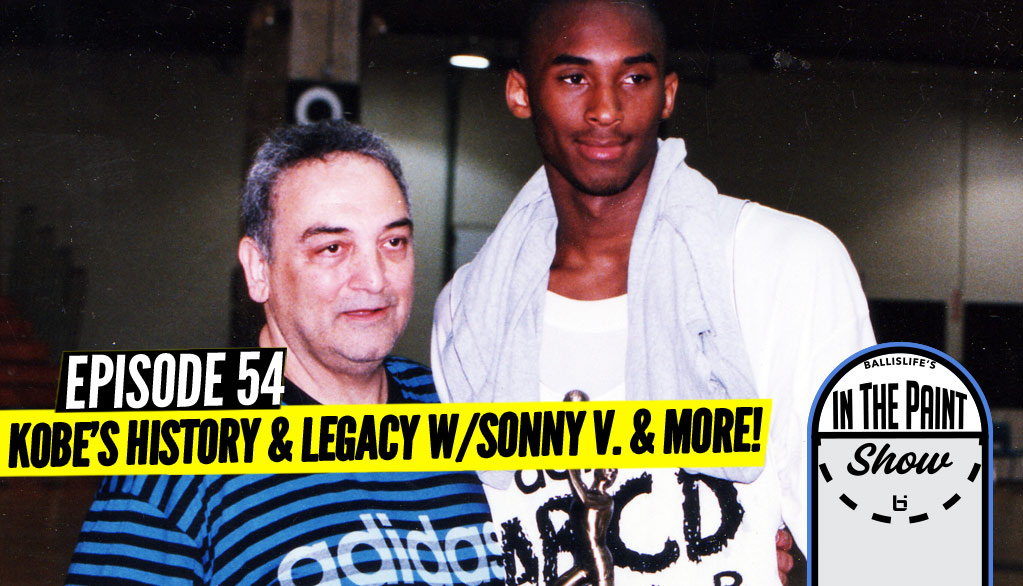 In Episode No. 54 of our "In The Paint Show," Ron and Devin do the pod they never thought in a million years would be necessary: a recollection and insight into the life of a gone-too-soon icon, 41-year old Kobe Bryant. Sonny Vaccaro, who helped orchestrate his prep-to-pro move and signed him to adidas, along with five other special guests, offer their unique perspective, and some never-before-heard stories of The Black Mamba.

In Episode No. 54 of our “In The Paint Show,”  co-hosts Ronnie Flores and Devin Ugland do the podcast they never thought in a million years would be necessary: a recollection and insight into the life of a gone-too-soon basketball star. In this case, it’s still shocking former Los Angeles Lakers icon Kobe Bryant is no longer gracing the earth, gone at age 41 after a aviation accident last Sunday that killed seven other passengers, including his 13-year old daughter GiGi, and the pilot.

In a special two and one half hour show, the fellas bring on six special guests, each with their own unique perspective and insight on either Bryant’s formative years, legendary pro career or his untimely death.

Roundball Classic and ABCD Camp founder Sonny Vaccaro holds no punches, going in-depth on his relationship with Bryant while at Lower Merion (Ardmore, Pa.) and how the move was orchestrated to turn pro and join the Lakers after his show-stopping performance at the 1995 ABCD Camp.

Rashad Phillips of Sports Talk 2319, a member of the Class of 1996 as is former NBA guard Corey Benjamin, both break down their unique relationship with Bryant. Phillips was a late add-on to the 1996 Roundball Classic All-Star Game and Bryant’s inspirational words on national television that day still resonate. Benjamin, the 1996 Cal-Hi Sports Mr. Basketball, talks about what separated The Black Mamba from himself and other elites in that class.

Rome Douglas, a former NFL offensive lineman, has a 11-year old daughter who is an up-and-coming basketball player, and both were present at the Mamba Academy in Thousand Oaks, Calif., on that fateful day. Douglas talks about being at the facility when the awful news broke and how Kobe’s and GiGi’s loss will reverberate in the girls basketball community for many years to come.

Frank Burlison of BurlisonOnBasketball.com talks about evaluating Bryant for the first time as a rising junior while playing for the Sam Rines AAU travel ball club in Las Vegas. You won’t believe what Bean shot from the field on the day he made a lasting impression of the Hall of Fame sportswriter.

14:47: Sonny Vaccaro describes his reaction to Kobe’s death, goes in-depth on his history with Kobe.

56:50: Rashad Phillips on his memories of playing against Kobe at the 1996 Roundball Classic.

1:12:40: 1996 CalHiSports POY, former NBA player Corey Benjamin on hearing about Kobe in high school, interactions with him over the years.

2:00:51: Longtime SoCal journalist Beto Duran on his interactions with Kobe and what made him such a respected figure in the Latino community.

2:26:44: Ronnie and Devin close out the show with their most memorable Kobe moments.