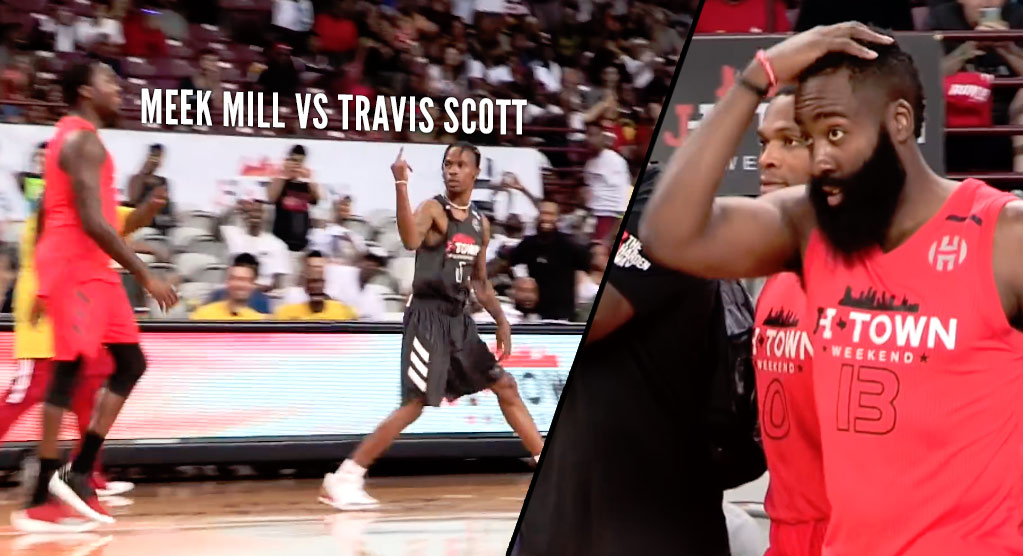 It was an OKC reunion in Houston on Sunday. Thunder point guard Russell Westbrook made a surprise appearance at James Harden’s 2nd annual JH-Town Weekend charity game to play alongside his former teammate from the 2010 Thunder team that went against LeBron in the 2012 NBA Finals.

Westbrook provided two of the best highlights of the night: One was him catching an oop from Harden like they used to do during Harden’s rookie season and the other was him savagely blocking rapper 21 Savage, who tried to do his best euro-step move that Westbrook and Harden have perfected.

Russell Westbrook with the savage block on 21 Savage!#JHTownweekend

For many, the most entertaining part of the game was the “match-up” between H-Town’s Travis Scott and Meek Mill; The two rappers hilariously played defense like they were in a no blood, no foul jail league.

Scott’s highlight of the night (which happened while Meek’s former girlfriend, Nicki Minaj, was ranting on Twitter about her album being outsold by Travis Scott) was knocking down a three-pointer over Meek and celebrating by giving him the finger and then “shutting him down” on the other end.

? Travis Scott knocks down a 3 over Meek Mill then gives him the middle finger!

The basketball game was the final event of the three-day JH-Town Weekend, which also included a comedy show and a celebrity softball game. Like the basketball game, home run-hitting Travis Scott stole the show on the diamond, which is OK with the league MVP since all of the money raised during this weekend’s event went to his 3 the Harden Way foundation.

On Travis Scott: “He hit a home run and I didn’t!” #Rockets pic.twitter.com/tRmfenTUni

James Harden explains why the now annual #JHTownWeekend is so important to him, starting with the happiness he’s seen around Houston at the events: pic.twitter.com/PAKK83BaAZ

That’s a wrap for the second annual JH-Town Weekend! ? pic.twitter.com/Gn5TICbUFz

Here’s a few throwback clips from their early days in the NBA.