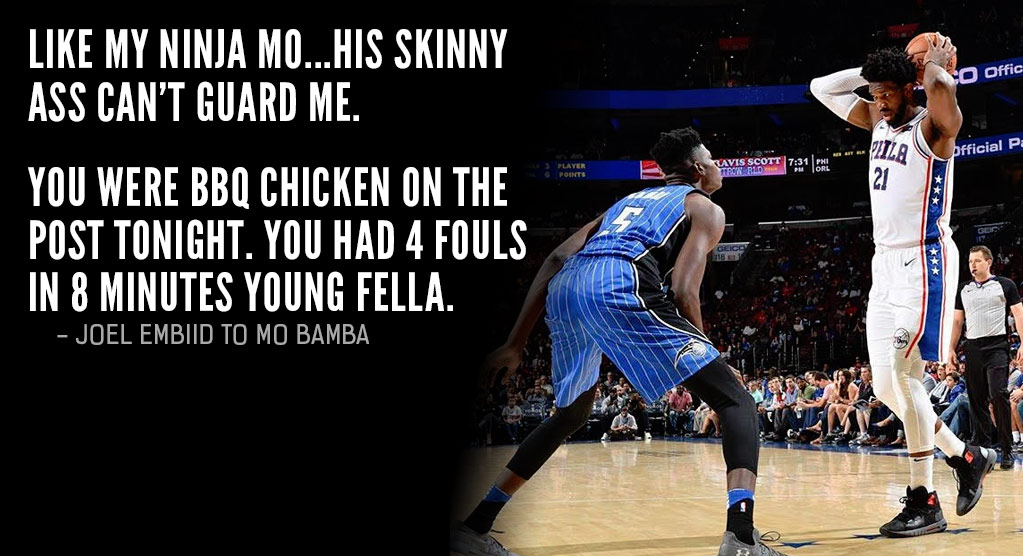 “Welcome to the fucking league!” That’s what Joel Embiid had to say to Mo Bamba back in June after dunking on him during one of Drew ...(Read more)

“Welcome to the fucking league!”

That’s what Joel Embiid had to say to Mo Bamba back in June after dunking on him during one of Drew Hanlen’s summer workouts.

On Monday, the NBA All-Star big man got to properly welcome the rookie unicorn to the league during the 76ers and Magic preseason game.

As expected, Embiid dominated with an easy 21 points (would have had more if he wasn’t jacking up so many threes; he was 8-of-9 from two and 1-of-6 from three) and 7 boards in just 23 minutes. The 7’0″ Mo knocked down both of his threes and finished with 12 points on 4-of-5 shooting in just 17 minutes off the bench. Not bad.

After his preseason debut, Mo posted a posted a couple of pics of him and Embiid with a “Welcome to the fucking league” caption.

As expected, the league’s best IG roaster commented on the post.

“Bruh, that’s a block, layup…whatever that is. You were BBQ chicken on the post tonight. You had 4 fouls in 8 mins young fella. I would’ve fouled you out in 10. That’s a welcome to the F league. Gotta learn how to guard without fouling. All love haha.”

Embiid then posted a pic of his own on his IG account with the caption: “Like my ninja MO…His skinny ass can’t guard me.”

“LMAO Okay this is pretty funny.”

These two are going to generate a lot of entertaining battles on and off the court.