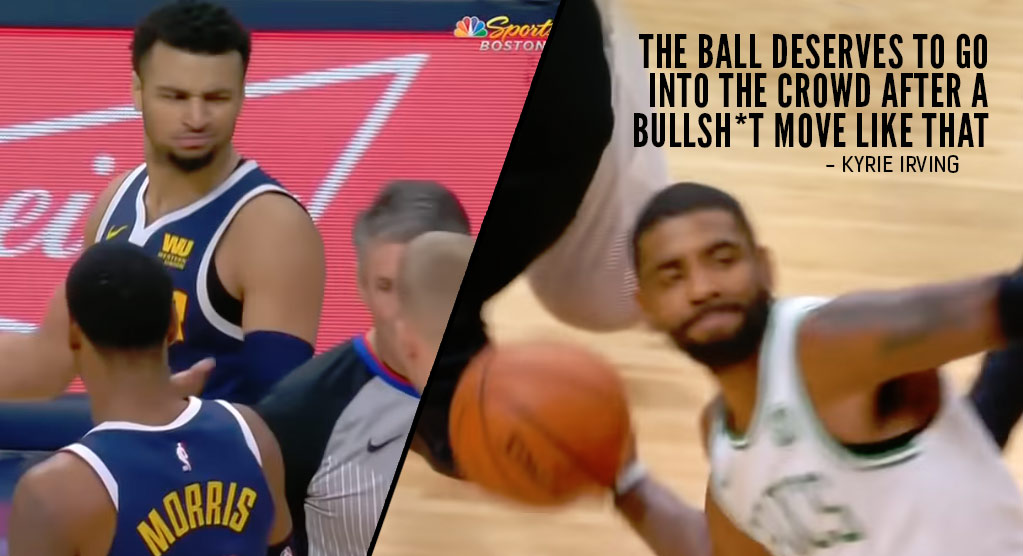 Kyrie threw the ball into the crowd after Jamal Murray's attempt to make 50-points as the game ended pic.twitter.com/Vbx3oNxmaf

“The ball deserves to go into the crowd after a bullshit move like that, so I threw it in the crowd.”

The bullshit move Kyrie Irving was referencing was a three-point attempt by Jamal Murray in the final seconds of the Nuggets 115-107 victory over the Celtics. The three would have given Murray 22 fourth-quarter points and 51 for the game. He missed it and had to settle for a career-high 48 (19-30 FG, 5-11 3PT) and an impressive 9-1 record (6-0 at home) for his team.

“We good.” Said Murray after the victory. “He knows I was trying to get 50. I didn’t mean no harm. I shouldn’t have done it.”

Is it really that big of a deal?

Plays like this are often frowned upon and viewed as unsportsmanlike but understandable. His previous career-high was 38 and he’s only scored 30+ eight times in his first two seasons. He was feeling it on this night against a good team with a superstar like Kyrie Irving and had the opportunity to join the 50-point club. Most young guys (and many older vets) probably would have done the same, knowing it might piss off the losing team.

“What kind of competitor wouldn’t it bother?” Said Irving, who finished with a team-high 31 points on 13-of-17 shooting. “Obviously, I was pissed at the game, but it’s time to decompress and move on. Congratulations to him having 48 points. He did it in a great fashion against us. Our defense has to be better, especially against a player like that in the pick-and-roll. He was the primary concern tonight and he made us pay in certain instances of making some tough shots and some tough layups.”

All of those tough shots and layups also put Murray in some elite company. Here’s a list of Denver Nuggets with 48+ points.

Lakers fans hearing about this “BS move” might have last season flashbacks of Lonzo Ball saying, “It’s a punk move” after Murray dribbled around him in the final seconds of a Nuggets victory. Ball didn’t react to Murray during the game but teammate Julius Randle and Coach Luke Walton did.

Believe it or not, there’s actually another story about Murray and the final seconds of a game against the Lakers. This one happened a few months after the Lonzo incident and involved Murray’s current teammate Isaiah Thomas. Up nine in the final seconds, instead of dribbling out the clock, IT chucked the ball at Murray with two seconds left in the game.

“I can’t control what the other team’s gonna feel,” Said Murray. “I’m just gonna go out there and hoop, and whoever takes it to heart and takes their losses salty, I can’t do anything about that.”

Here’s a montage of “unnecessary last-second shots,” which includes one of my all-time favorite endings to a game: Caron Butler tricking and stealing the ball from Jonas Valanciunas when his team was down by 27.