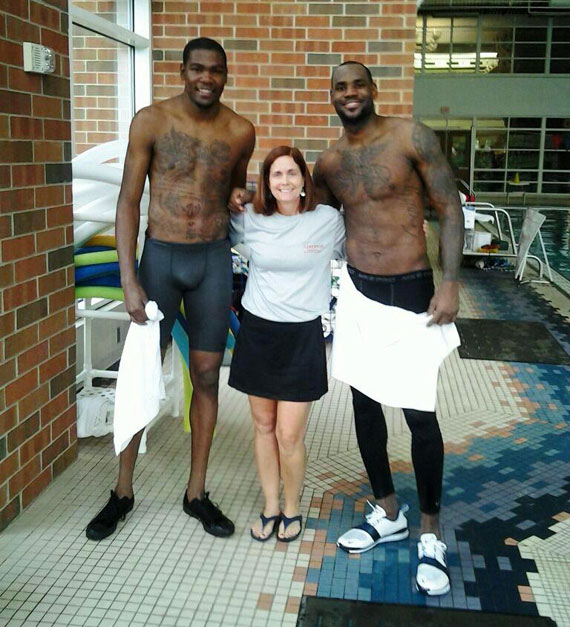 (UPDATE: Listen to the full “It Ain’t Easy” song by LeBron & KD at the bottom)

On Monday, Chris Haynes of ESPN wrote about a “secret hip-hop track” from 2011 featuring LeBron James and Kevin Durant. The collabo happened during the 2011 NBA lockout, when the former Heat and Thunder stars were working out together in Ohio and taking amusing photos like the one above.

Durant’s agent, Eric Goodwin, praised the track and even suggested the song should be submitted to Warner Bros so it could be featured in the 2012 film “Thunderstruck.”  KD wanted to keep it private, which is too bad because if it was a good track then it would have been the only good thing about the box-office bomb.

Late Monday night, Spider Studios in Cleveland, Ohio released a snippet from the track aaaaand….it’s not Dame Dolla but I rather listen to this than 90% of current rap artists and their mumble raps.

KD: Every hater all the same, I’m feeling like the world is Skip Bayless and I’m LeBron James.

LeBron: It ain’t easy, on the path I’m on, But put the world on my back cause I’m that strong.
Long journey I been on from the very start, No way I die off, with this iron heart.

LeBron also sounded a little better than he did on this “Fuck With Me You Know I Got It” freestyle from 2014.

As for KD, I actually had a discussion with one of his family members last summer about all of the unreleased music he has recorded over the years and said I hope he releases it. I would bet on LeBron coming back and beating Durant and the Warriors in the NBA Finals before Durant releases the tracks, so, here’s what we do have from the private studio rapper.

The full track was released on Soundcloud by Franky Wahoo in September of 2018.

You can read about the making of the track in this Noisey interview with Wahoo, who agrees with me that Shaq is the best NBA rapper of all time.

There was nothing I could do, a lot of celebrities retweeted it, comedians retweeted it, Ellen retweeted it. So I was like, I can’t feel bad now. It kept going viral and Paul finally called back saying “yeah don’t leak it we kinda wanna do something with” it because there’s a 2K game coming out [with LeBron on it] and there are different things we could implement this in without actually putting the track out. So they may have put it in a 2K commercial as background music but they didn’t want the song to be downloadable or streamable.

So for two years, they went back and forth with me. They’d come up with an angle like “oh we’re gonna try to do it on this blase skit” and weeks of email with them and I’m like “what the hell man.” Then I’d see Cleveland DJs playing it at clubs. So I talk with my manager and he’s like “there’s no paperwork on this that they bought this off you or anything.” The big thing was like one of the friends [of LeBron] that’s a DJ here, we were scared that they were gonna publish [the remake] without crediting me, which could easily happen.