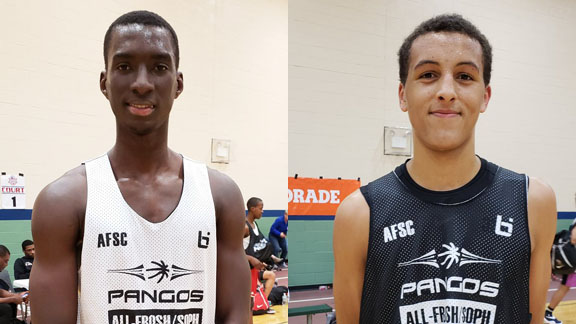 The Pangos Frosh Camp series hit the Midwest at Park District of La Grange (La Grange, Ill.) and after the first day everybody was talking about ...(Read more)

The Pangos Frosh Camp series hit the Midwest at Park District of La Grange (La Grange, Ill.) and after the first day everybody was talking about the terrific camp game featuring No. 1 national 2021 prospect Patrick Baldwin (Hamilton, Sussex, Wis.) and relative unknown big man Sekou Gassama (Desmet Jesuit, St. Louis MO). It was a terrific camp game and brought out the best in Baldwin!

The purpose of the Pangos Frosh/Soph Camp tour is to give up and coming high school players a platform to receive national exposure in front of influential individuals in the world of grassroots basketball and to test their skill level against their peers on a regional, and even national, basis.

For 6-foot-9 Patrick Baldwin, whom most respected recruiting evaluators feel is the No. 1 prospect in the national 2021 class, the Pangos All-Midwest Frosh/Soph Camp is not about exposure or seeing where he stacks up against other elite Midwest talent.

The camp is a measuring stick of his own game. A self-evaluation of sorts and something else just as important. “I really want to see where my game is at as a whole compared to where it was during the high school season,” Baldwin said as he prepared for his Saturday evening game. “To come here and compete is my main goal.”

The way Camp ? Should Be! Players challenging each other! pic.twitter.com/aeUO1VYF1M

Baldwin burst onto the national scene two years ago at this camp with a terrific performance for a rising eighth-grader, ranked the No. 26 performer overall in by GrassrootsHoops.net and setting the stage for a terrific freshman campaign at (Hamilton, Sussex, Wis.) after once again playing in the event last October.

In 2017, he was name Pangos All-Midwest Frosh/Soph Camp Most Outstanding Player and was subsequently ranked No. 1. He followed that up by earning Underclass All-American honors from Ballislife.com, only one of 10 freshman nationally to make the cut on the prestigious honors squad.

“I don’t stick my chest out and say ‘I’m No. 1’ or anything like that, but I do believe in myself and my ability,” Baldwin said.

In the spirit of competition, Baldwin came to the event for a third time. Now finding someone to go against and compete with was another matter. It wouldn’t have been shocking if Baldwin was heads and shoulders better than everyone and didn’t find someone who could match his tremendous skill level. Baldwin is self-motivated and a high character young man, but there is nothing he could do if anyone wasn’t remotely talented enough to guard him. On the flip side, there is only so much one can do if a player is just too big, too skilled and too experienced to guard.

That wasn’t the case.

In his first camp game, Baldwin found a perfect test for his budding game, one that has him being compared to the likes of NBA players Kyle Anderson and Jabari Parker.

Meet Sekou Gassama, a 6-foot-10 sophomore (2021) from Desmet Jesuit (St. Louis MO). The Mali native attended this same camp last year and barely registered on scouting sheets. Sure, he had terrific size and some long-term potential, but little feel and polish.

Oh, what a difference 365 days can make.

Gassama, who watches alot of and tries to pattern his game after NBA star Anthony Davis, is a true post player with a terrific frame who can run the floor with ease. His balance and footwork are light years better than what it was a year ago. Gassama is also tough and loves to use his muscular upper body to mix it up inside. He also displays a solid shooting touch at the free throw line for someone with little experience playing the game.

In one of the best camp games we’ve seen in recent memory at the Pangos Frosh/Soph Camps, Gassama went to work right away. He competed and bodied up Baldwin and really made him work for his, and the Sussex High standout got plenty. Gassama tried to push Baldwin further out from his comfortable spots, and he responded by making deep jump shots and with beautiful driving finishes, including some of the left-hand variety. Baldwin also did some work on the blocks, but Gassama offered plenty of resistance. Gassama also made some baskets around the rim and threw down a powerful dunk off an offensive rebound put back that got everyone in the gym noticing the terrific matchup and asking, “Who’s THAT guy?”

Baldwin couldn’t ask for a better scenario: someone to bring out the best in his vast arsenal. So did Gassama surprise Baldwin (who he remembered from last year)?

“He did, actually, he plays extremely hard,” Baldwin said.

“I had come from Africa two weeks before last year’s camp,” Gassama said. “I was not ready to do something good. The games was too fast for me, but I have worked really hard to get ready for this year.”

The Mali native is playing with a heavy heart as his father back home passed away two months ago. His mother, two brothers and sisters remain in his home country. Gassama would like do nothing more than to honor the memory of his father and make his family back home proud by doing his very best here in the United States.

“Of course the basketball competition is good here, but I also like school. It’s a big opportunity for me to study.”

Gassama couldn’t have chosen a better course than this camp.