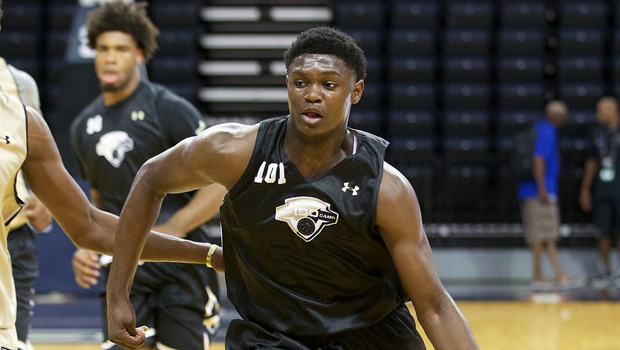 After four days and 41 games, the Heat outlasted the competition to win the team title at the 2016 NBPA Top 100 Camp at the University ...(Read more)

After four days and 41 games, the Heat outlasted the competition to win the team title at the 2016 NBPA Top 100 Camp at the University of Virginia on Saturday evening. 2017 point guard Chris Lykes and 2018 forward Zion Williamson led the way, as the Heat knocked off the favored Rockets in the title game.

In a competitive setting grassroots camp that lasts four days, the unit with the most consistent performer is likely to capture the team championship. At the 2016 NBPA Top 100 Camp, that is exactly what happened as Zion Williamson, a powerful 6-foot-7 junior-to-be forward (2018) from Spartanburg Day School (Spartanburg, S.C.), was the top overall performer and led the Heat to the championship.

Williamson drew comparisons to names such as Jamal Mashburn, Mark Aguirre and even former UNLV and California legend Eldridge Hudson with his powerful finishes around the basket. He led the camp in scoring (14.6 ppg) and had 14 points in the title game, as the Heat defeated the Rockets, which was the top seed with a 5-1 record coming into Saturday’s playoffs.

With its relatively easy 109-89 victory, the Heat finished 8-1 overall. The lopsided title game win was spearheaded by point guard Chris Lykes, who earned All-American honors from Ballislife.com and was the MVP of the powerful Washington Catholic Athletic Conference (WCAC) as a junior. Lykes’ play was up and down during the camp, as he struggled finishing at times, but he put it all together when it mattered.

The 5-foot-8 point guard and Miami commit out of Gonzaga (Washington, D.C.) made 3-of-5 shots from behind the 3-point line and finished the title game with 25 points, four rebounds, three assists and zero turnovers. Besides Williamson and Lykes, four other players scored in double figures for the Heat, including 14 points by 2017 shooting guard Alex Barcello of Corona del Sol (Tempe, Ariz.) and 13 points by 6-foot-10 2017 prospect Malik Williams of Snyder (Ft. Wayne, Ind.). Barcello had an excellent close to camp by adding nine rebounds, seven assists and two steals.

The Rockets looked like world-beaters up until the last game of the camp because they had arguably the top two producing point guards at the event: 5-foot-11 Tremont Waters of South Kent Prep (Kent, Conn.) and 6-foot-3 Jaylen Hands of Balboa School (San Diego, Calif.). Waters led the camp in assists (5.6 apg) and Hands was tied for second (4.7 apg) with Isaiah Washington of St. Raymond’s (Bronx, N.Y.), but they were struck some by misfortune in the title game.

Waters only played five minutes before a cut over his eye forced him to miss the remainder of the game. Hands, who played well at adidas Eurocamp the previous week, meanwhile, had seven assists against zero turnovers, but made only 1-of-11 field goal attempts from the field.

Waters nailed a 3-pointer with one second remaining in overtime to propel the Rockets to a 77-76 semifinal victory over the Knicks. He finished with a game-high 18 points, five rebounds, eight assists and four steals. The Heat advanced to the title game with a 83-80 overtime semifinal victory over the 76ers. Williams hit a 3-pointer to send the game into an extra period and came up with a key block on Washington in the closing seconds to help his team secure the game. He finished with team-highs of 16 points and nine rebounds, in addition to collecting two steals.

Williamson and Waters were named camp co-Most Outstanding Player by the event’s selection committee. Zedekerskis and Hands also made the 13-man all-camp team.

Here were some other selected standouts were caught our eye at the NBPA Top 100 Camp:

Evan Battey, Villa Park (Calif.) 6-7 2017: Relatively unknown outside of California, the power forward helped himself tremendously from a national perspective. His activity level was off the charts and he scored from various spots on the court. Battey knows how to position himself to score, has good hands, and is much more agile that his frame might indicate otherwise. He finished third in the camp in scoring (12.9 ppg) and fifth in rebounding (6.8 rpg).

E.J. Montgomery, Montverde Academy (Montverde, Fla.) 6-10 2018: Came into the nationally known high school academy program in Florida highly-regarded, but was a bit inconsistent his sophomore season. Montgomery seemed to take his game to another level once Isaiah Washington joined his 76ers club that advanced to the semifinals. Montgomery was active on the glass, ran the floor to beat other big men down and get into scoring position. He also displayed nice shooting touch around the basket. Montgomery averaged just a shade under 10 points per game (9.9) and was one of the camp’s leading rebounders at 5.4 per game.