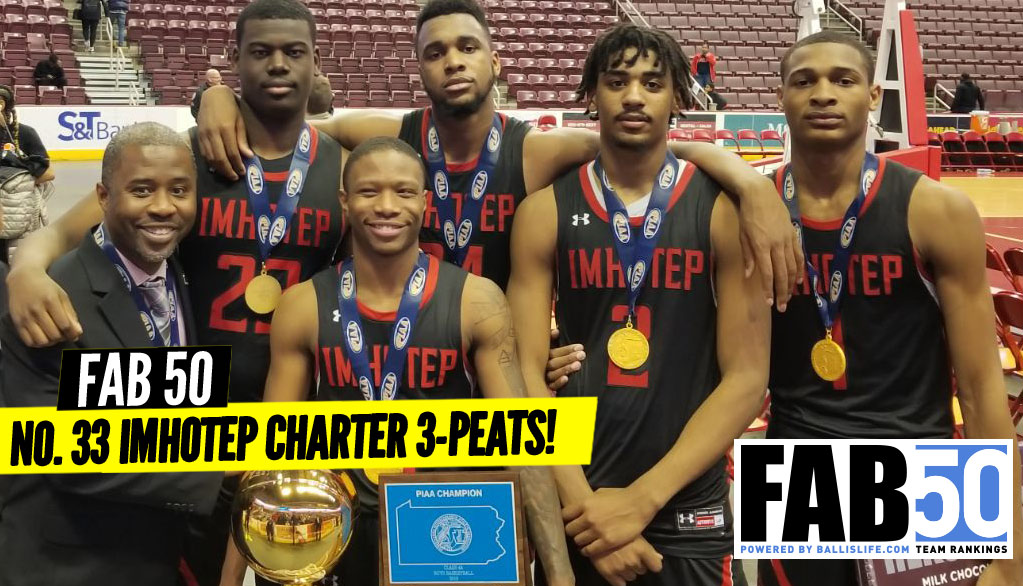 All state playoff games are in the books with GEICO Nationals the only games remaining for the 2018-19 season. State champs moving up in this week's FAB 50 are Moeller (Cincinnati, Ohio), Carmel (Carmel, Ind.) and Imhotep Charter (Philadelphia, Pa.)!

All the state playoff games are in the books with GEICO Nationals the only games remaining in the 2018-19 season. State champions moving up in this week’s FAB 50 National Rankings powered by Ballislife.com are Moeller (Cincinnati, Ohio), Carmel (Carmel, Ind.) and Imhotep Charter (Philadelphia, Pa.) and three other state champs crack the latest poll. How much will GEICO Nationals affect the final rankings on April 8?

State champions in all 50 states have been crowned and the only games remaining are those involving the eight FAB 50 ranked teams competing at GEICO Nationals in New York, April 4-6. The biggest news of the past week was the crowning of state champions from the largest classifications in Ohio, Indiana, Pennsylvania, and New York.

In Ohio, Moeller (Cincinnati, Ohio) repeated as back-t0-back Division 1 champions with a 52-44 victory over bubble club St. Vincent-St. Mary, as senior forward Alec Pfriem had 19 points and eight rebounds and West Virginia-bound guard Miles McBride had 13 points, six rebounds and three assists to lead the Crusaders to a come-from-behind victory. Moeller won its fifth state crown since 1999 and was able to move up to No. 7 in this week’s rankings by virtue of becoming the first unbeaten OHSAA D1 state champ since Zanesville in 1995. Moeller, which defeated St. Edward (Lakewood, Ohio) 72-52 in the state semifinals behind a double-double from Pfriem, will enter 2019-20 riding a 49-game winning streak.

West Virginia coach Bobby Huggins had to be estatic to see two of his WVU recruits win major state titles on the same day, as McDonald’s All-American center Oscar Tshiebwe led Kennedy Catholic (Hermitage, Pa.) to the PIAA Class 6A state championship after defeating Coatesville (Pa.), 75-69, in the semifinals and needing double overtime to knock off Pennridge (Perkasie, Pa.), 64-62, in saturday’s title game. Tshiebwe was the difference-maker with 16 points, 21 rebounds, nine steals, and six blocked shots, including one with just over a second remaining in double OT to preserve the victory. Coach Rick Mancino’s club moved into the FAB 50 at No. 50, as it only lost one game in-state. That was against Imhotep Charter (Philadelphia, Pa.), which moved up five spots to No. 33 after capturing the PIAA Class 4A title with a 67-56 win over previous No. 49 Bonner-Prendergast (Drexel Hill, Pa.). Coach Andre Noble’s club won its third consecutive state crown.

With forward Donta Scott (Maryland) and guard Dahmir Bishop (Xavier) as anchors, Imhotep has had a dominant presence in the FAB 50 over the past three years. The Panthers were able to move up in the rankings because of their overall success against a difficult schedule and for closing out the season with a victory. Although their regular season did not go as well as anticipated, Imhotep gets rankings credit for wins over GIECO Nationals participants University School (Ft. Lauderdale, Fla.) and Oak Hill Academy (Mouth of Wilson, Va.), which check in at No. 10 and No. 17, respectively in the FAB 50.

Another state champion moving up this week was IHSAA Class 4A state champ Carmel (Carmel, Ind.), which is up a spot to No. 15 after defeating Metro Conference rival Ben Davis (Indianapolis), 60-55, in the state title game. Pete Suder and John-Michael Mulloy led four Greyhounds players in double figures with 14 and 13 points, respectively. Carmel pulled out the close game to win the program’s fourth state crown and only lost one game all season by two points (52-50) to Brownsburg (Brownsburg, Ind.).

God’s timing is perfect. A year ago was the worst experience I had ever had in athletics. Belief, perseverance, and trust brought us back to this moment. I have no amount of words that can truly express my gratitude for these young men. 2019 State Champs! pic.twitter.com/HhAZib2ISk

Although it wasn’t able to move up in the rankings, one of the most satisfying state championships of the season had to be the one No. 28 Long Island Lutheran (Glen Head, N.Y.) captured on Saturday. The NYSAIS champ defeated previous No. 43 South Shore (Brooklyn, N.Y.), 77-53 in the New York Federation Class AA semifinals, as junior guard Andre Curbelo led the way with 31 points and five assists. In the Class AA final, the Crusaders easily dispatched bubble club Christ the King (Middle Village, N.Y.) 51-31, as Curbelo had 23 points. The Federation TOC crown was especially sweet for coach John Buck’s club, which lost to Archbishop Stepinac (White Plains, N.Y.) in last year’s Class AA TOC semifinal game after being called for a technical foul by the scorer’s table and officials for calling a timeout it believed Long Island Lutheran didn’t have. Coach Buck and his staff unofficially proved it indeed had a timeout left, but the clerical error was not overruled or the game replayed.

The newcomers this week is rounded out by Hopkins (Minnetonka, Minn.), which checks in at No. 49 after capturing the Class 4A state crown in Minnesota courtesy of its 55-40 victory over Lakeville North (Lakeville, Minn.), a team that downed previous No. 45 Park Center (Brooklyn Park, Minn.) in the state semifinals. Kerwin Walton and 17 points and Zeke Nnaji had 14 points and 12 rebounds for Hopkins, which captured its second state crown in four years and its eighth since the 2001-2002 season.