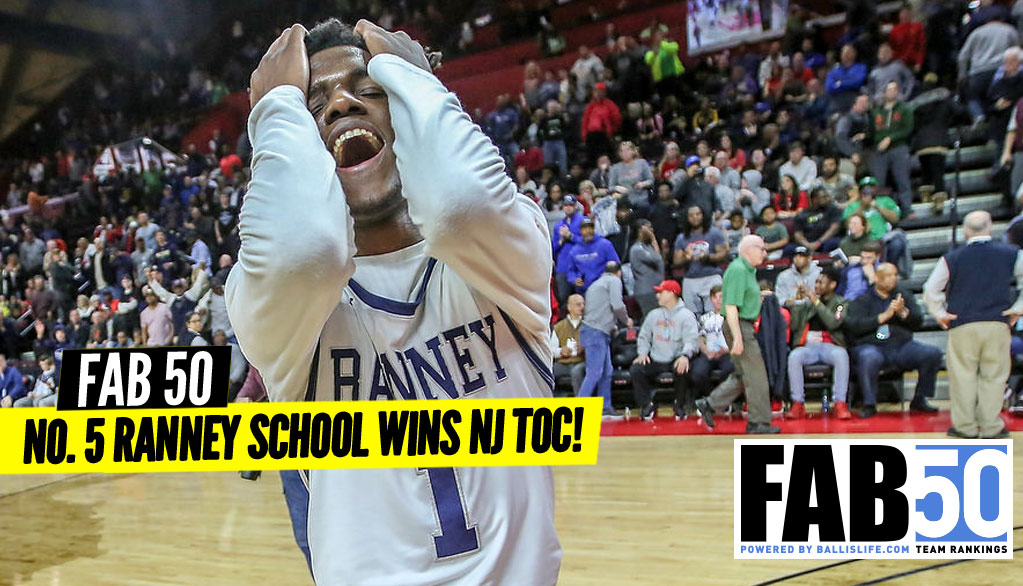 More state champions crowned over the weekend and there are still seven FAB 50 ranked teams looking to capture state tiles this week! No. 2 McEachern (Powder Springs, Ga.) will no longer play at GEICO Nationals and has been replaced by No. 25 Bishop Gorman (Las Vegas, Nev.). We'll break it down this week!

No. 2 McEachern (Powder Springs, Ga.) will no longer play at GEICO Nationals and has been replaced by NIAA Class 4A champ Bishop Gorman (Las Vegas, Nev.), which moves up to No. 25 in this week’s FAB 50 National Rankings powered by Ballislife.com. More state champions were crowned over the weekend and there are still seven FAB 50 ranked teams looking to capture state titles this week. There are three newcomers to this week’s FAB 50 and you can expect more shakeup next week after all the state championships are complete.

Plenty of quality teams closed out their season last week with state titles to secure a spot in the final FAB 50 FAB 50 National Rankings powered by Ballislife.com, which will be published April 8. While the opportunity to land one of the coveted spots in the rankings in quickly closing, the pecking order still has plenty of room for movement over the final three sets of rankings for the 2018-19 season.

The highest ranked team to close out its season in the victory circle last week was No. 5 Ranney School (Tinton Falls, N.J.), which captured the New Jersey Tournament of Champions title with a 67-63 victory over bubble club Bergen Catholic (Oradell, N.J.). Mr. Basketball USA candidate Scottie Lewis led the way for Ranney School with 20 points and 11 rebounds, as the Panthers not only won the school’s first TOC crown, but also the first one for a Shore Conference program. Ranney School also got a solid performance from Phillip Wheeler (14 points, six rebounds, three steals) and a big 3-pointer from Alex Klatsky at the beginning of the fourth period as the Panthers overcame an early 12-point deficit.

For Ranney head coach Tahj Holden, who led the program to 103 wins in the four seasons Lewis and Villanova-bound Bryan Antoine were in the lineup, he added a TOC crown to a resume that included a NCAA crown as a player. Holden was a starter on Maryland’s 2002 title-winning club. Ranney School also won the New Jersey Non-Public B state title by defeating No. 15 Roselle Catholic (Roselle, N.J.), whom it actually beat twice this season. Ranney’s success is also a swoon for North Carolina Class 4A state champ South Central (Winterville, N.C.), which lost its only game of the season to the Panthers. It moves up to No. 14 this week.

The state champion that made the biggest splash this week is IHSA Class 4A state champ Belleville West (Belleville, Ill.), which captured back-to-back Class 4A state crowns courtesy of a 71-59 victory over bubble club Evanston (Evanston, Ill.). All-American candidate E.J. Liddell had 24 points, while Will Shumpert added 21 points for the Maroons in the 12-point victory. Helping Belleville West move up 15 spots this week to No. 18 was its dominant 70-48 state semifinal victory over previous No. 12 Curie (Chicago, Ill.) and its overall resume now that the season is complete. The Maroons split games with Class 3A champ East St. Louis (East St. Louis, Ill.), defeated Alton (Alton, Ill.) two out of three times and lost to Collinsville (Collinsville, Ill.) when Liddell sat out with injury. The fourth loss was to No. 11 Shadow Mountain (Phoenix, Ariz.).

Belleville West also helped Pinnacle (Phoenix, Ariz.) break into the FAB 50 at No. 50, as the AIA Class 6A champs own a win over Shadow Mountain, the AIA Class 4A champs. One of the other losses for Mr. Basketball USA candidate and Arizona recruit Nico Mannion and company was to No. 34 Mater Dei (Santa Ana, Calif.).

No. 2 McEachern Pulls Out Of GEICO Nationals

After state champions are crowned this week in Indiana, Minnesota, New York, Ohio, and Pennsylvania, the attention will shift focus to GEICO Nationals, set for April 4-6 at Christ the King (New York, N.Y.). After winning the GHSA Class AAAAAAA state crown on March 9, coach Mike Thompson of No. 2 McEachern (Powder Springs, Ga.) told the Atlanta Journal-Constitution and SUVtv that his club accepted an invitation to GEICO Nationals, which was on the Indians’ radar all season long as one of the best teams in the country and part of an association that allows its teams to play.

Last Friday, an official announcement was made that McEachern will not play in the event, thus changing the eight-team bracket and seeds for the end-of-season event. McEachern was not going to be at full strength for the tournament, but event organizers still extended the invitation to the Indians no matter whom on its roster was going to play. Thompson told USA Today his team was going to play intact or not play, so the program and school declined the invitation. FAB 50 No. 25 Bishop Gorman (Las Vegas, Nev.) was added to the field as NIAA member schools are eligible for the event for the first time this season.

Below is the new television schedule for the first round (April 4th, ESPNU):

We will break down the field and the development with McEachern this week.