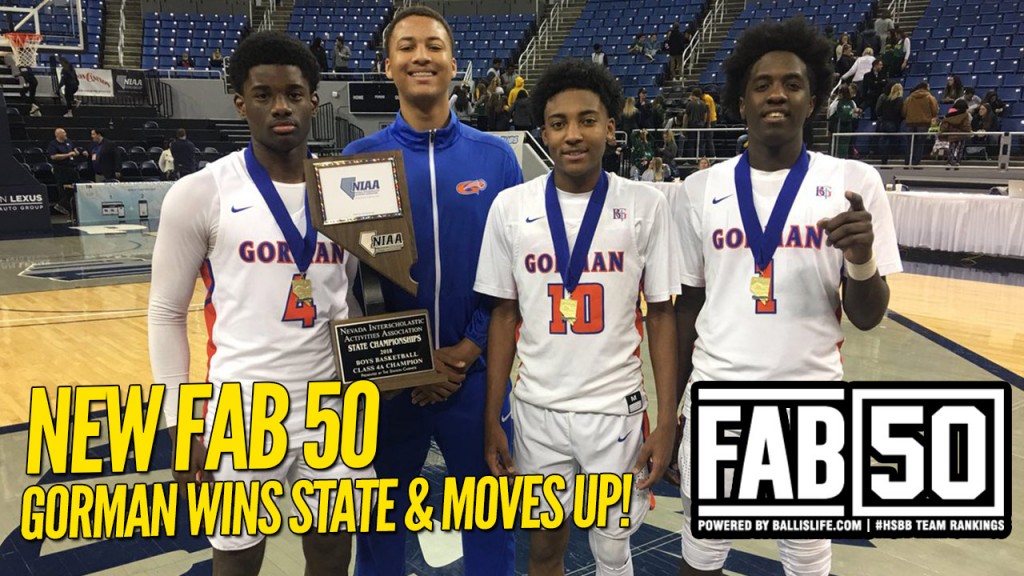 The eleventh edition of the FAB 50 National Team Rankings powered by Ballislife.com for the 2017-18 season has major shakeup as a result of playoff games from ...(Read more)

The eleventh edition of the FAB 50 National Team Rankings powered by Ballislife.com for the 2017-18 season has major shakeup as a result of playoff games from across the country and some big news regarding one of the nation’s top teams. The results cause five new teams to move into the rankings this week and we already have a highly-ranked team that has finished its season (Bishop Gorman of Las Vegas) and made a big move up because of big playoff results in other states.

In last week’s FAB 50 National Team Rankings powered by Ballislife.com , we mentioned how the playoff pressure has turned up as top-ranked teams begin to play tough teams in their respective sectional, district and/or regional playoffs. Well, the pressure was on for No. 15 Bishop Montgomery (Torrance, Calif.) in the CIF Southern Section Open Division semifinals facing a Sierra Canyon (Chatsworth, Calif.) team it beat earlier in the season. The Knights’ pipes burst as the Trailblazers avenged the earlier loss with an incredible 77-74 double overtime victory to hand Bishop Montgomery its first loss while snapping its 41-game winning streak in the process.

Sierra Canyon tied the game at the buzzer at the end of regulation and the first overtime, as it took an incredible sequence of plays for Sierra Canyon to record the avenging win and move up 24 spots in the latest FAB 50 to No. 23. Junior Cassius Stanley (18 points) heaved an out-of-bounds pass 60-foot downcourt to Duane Washington Jr. (20 points), who caught the contested pass on the run, dribbled out to the 3-point line and made the shot at the buzzer. K.J. Martin (18 points and 21 rebounds) sent the game into the second overtime by making a buzzer-beating layup. For the first time this season, the Knights had some defensive breakdowns and offensive mishaps and Sierra Canyon was able to take advantage of them. That’s what can happen when the pressure goes up in the post-season.

Bishop Montgomery fell 10 spots to No. 25, as Sierra Canyon had done enough to be ranked ahead of the Knights. Not only does Andre Chevalier’s club own a split with the Knights, their other two losses, to Arizona Class 4A state champion Shadow Mountain (Phoenix) and Nevada Class 4A state champ Bishop Gorman (Las Vegas), were both overtime affairs that Sierra Canyon easily could have won.

Cal-Hi Sports made the decision to go with Salesian (Richmond, Calif.) as California’s top-ranked team, so The Pride move up eight spots to No. 22, one spot ahead of Sierra Canyon and right behind the Bishop Gorman team Salesian lost to in the semifinals of the Tarkanian Classic that was broadcast on the Ballislife Weekly Showcase. Bishop Gorman’s strong finish and Sierra Canyon’s big win meant nice bumps up for one-loss Scott County (Georgetown, Ky.), which defeated Gorman at the Beach Ball Classic in South Carolina, and No. 19 Archbishop Moeller (Cincinnati, Ohio), which handed No. 20 Scott County its only loss at the same event. Two of Moeller’s three losses are to higher ranked FAB 50 clubs (No. 18 Long Island Lutheran of New York and No. 13 Imhotep Charter of Philadelphia).

The Gaels captured their seventh consecutive state title and are the highest-ranked team (so far) whose season is now complete. Gorman opened the season ranked No. 48 in the preseason FAB 50, but a relatively young nucleus jelled down the stretched, defeating rival Clark of Las Vegas (which opened the season at No. 35) four times, including in the Tarkanian Classic title game. The results involving Gorman and Sierra Canyon bodes well for Shadow Mountain, which moved up five spots to No. 11 and put itself in good position to be selected for GEICO Nationals in New York (March 29-31) for the second consecutive season.

The Matadors were trailing Salpointe Catholic of Tucson by 22 points in the third quarter, but an incredible stretch run by Arizona St. commit Jaelen House fueled the 83-79 comeback win. After trailing 54-32 with 5:33 remaining in the third, the Matadors outscored Salpointe Catholic, 32-11, in the final period, as House finished with 30 points and 14 steals. Shadow Mountain has only lost to No. 7 Findlay Prep (Henderson, Nev.) and the overtime win over Sierra Canyon looks alot better this week than it did last week.

A majority of the nation’s top-ranked teams moved up a spot because previous No. 2 Sunrise Christian Academy (Bel Aire, Kan.) had to be removed as a result of carrying two players on its roster that re-enrolled in ninth grade when they moved to the United State from Canada. It’s an unfortunate situation because coach Luke Barnwell’s club was in position for a high seed at GEICO Nationals.

We obviously don’t like to remove (or add) teams in the rankings after the season begins as a result of roster eligibility concerns and our goal is to not have to do that. We like to move teams based on the results on-court, as the Sunrise Christian situation doesn’t change the record or alter the wins and losses of other FAB 50 ranked clubs. Highly-regarded independent clubs play teams with fifth-year players on occasion, although it is becoming less frequent as the stakes raise with regards to the meaning of credible national rankings and how they influence invites to New York. Many coaches now feel the risk is too great to suffer a loss and the reward not big enough to beat a program that carries players deemed to be post-graduates.

“I was honest when the situation come to light,” Barnwell told Ballislife. “It’s my fault and we will do things right.”

Our FAB 50 policy is clearly laid out to coaches in the preseason and we know that there have been FAB 50 ranked clubs in the past that have carried players from Canada that fall in the same boat as the two current Sunrise Christian players. Unfortunately, teams have slipped through the cracks and been FAB 50 ranked in year’s past, but we do our best due diligence to make sure it doesn’t happen.

We are aware of another highly-regarded team this season whose roster has been brought into question and we’ve run into this issue on a few occasions since the advent of GEICO Nationals at the conclusion of the 2008-09 season. Many coaches have been honest and upfront about their roster situation, while others have let the powers to be do investigative work to figure it out. The latter is unfortunate because we want to spend our time watching and researching teams and pouring over the results, not doing investigative work regarding rosters.

We hope these type of situations continue to be cleaned up, and coaches do their preseason homework, so our goal of promoting a true national high school national tournament can come to fruition one day.